A break in the dry weather pattern was observed last week, but unfortunately, along with some scattered areas of hail and strong winds in parts of the North Central region. Areas that saw high levels of precipitation over a short period of time may not get the full benefits of the moisture as it drained off rather quickly. Here are some quick precipitation reports as observed by area NDAWN stations over the last week (beginning June 7th): Minot: 0.95” (NCREC: 0.93”); Bottineau: 2.03”; Garrison: 0.35”; Karlsruhe: 0.84”; Mohall: 1.84”; Plaza: 0.74”; and Rugby: 0.81”. Additionally, the bare soil temperature at the NCREC is observed at 75 degrees F.

Canola flea beetle damage continues to be reported in some localized locations in the region. Grasshopper activity continues to be reported in the area as well. With drought conditions in play, it is important to continue scouting protocols at this time. The North Central Region scout also found small grain aphids in the region for the first time this year. Populations were very low at this time; however, aphids can flourish with temperatures in the 80s. Aphids can have a high reproduction rate around those temperatures, so scouting will become important in the coming weeks.  For information on cereal grain aphids, please refer to Dr. Janet Knodel’s article in the June 10th edition of the Crop & Pest Report. Additionally, blister beetles were found in faba bean at the NCREC. Scouting of faba bean at this site indicated between 4 and 10 beetles per plant (Figure 1). No economic thresholds are established for blister beetle in faba bean.

Crops in the region vary greatly in terms of condition and growth stages being observed. Given the weather circumstances we are facing this year, the crops are in fair condition. Chickpeas, lentils and field peas are found in the field with growth stages varying from V6-V9 and a few already in flowering stage. Spring wheat is generally in good condition in the region with a wide range of growth stages being observed (Zadoks 5-25). Flax fields are found mainly in stage 5. We are observing corn and soybean fields with uneven emergence and growth stages (from seeds emerging to V4). 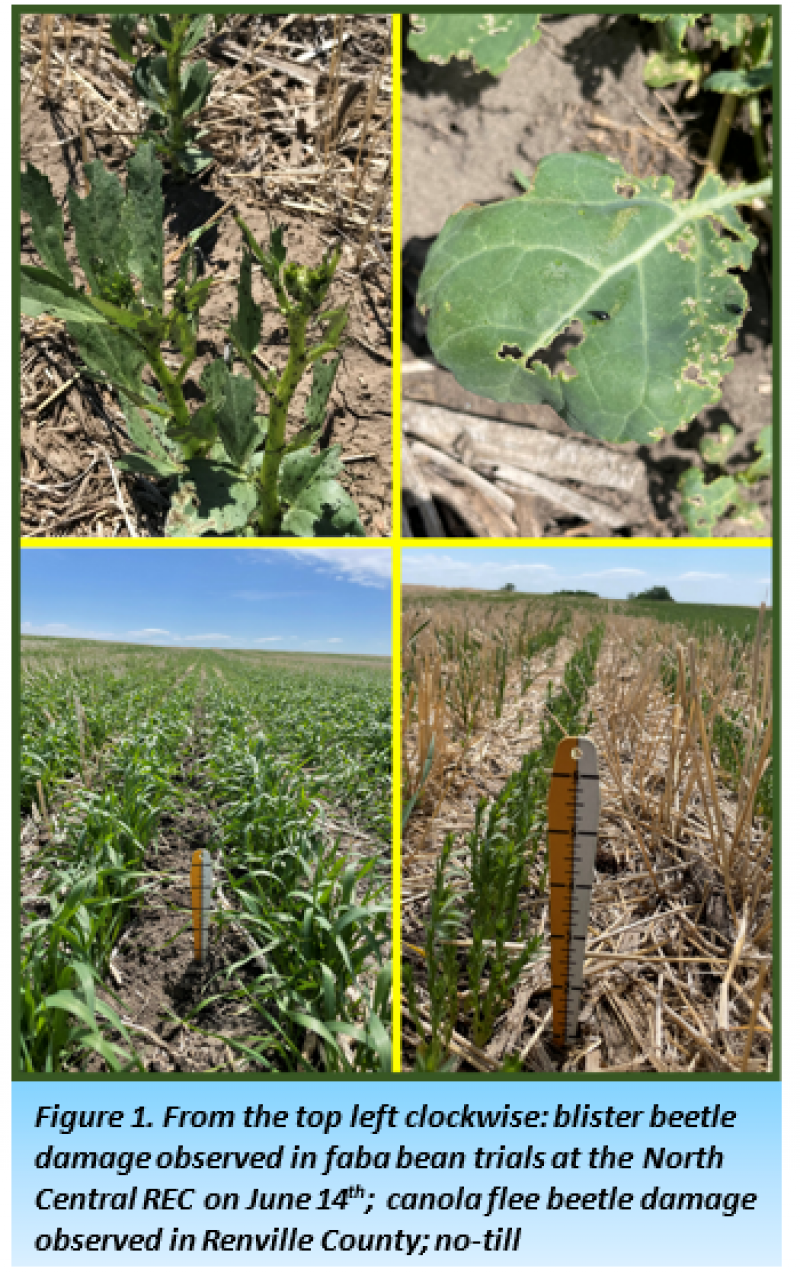