Rain was a welcome site over the weekend with some areas getting some decent amounts of rainfall. Some discussion with growers in the western Renville County area observed over two inches of rain. However, some regions missed out on the higher amounts of rainfall. Here are some quick precipitation reports as observed by area NDAWN stations over the last week (beginning June 21st): Minot: 0.30” (NCREC: 0.37”); Bottineau: 0.41”; Garrison: 0.45”; Karlsruhe: 0.21”; Mohall: 1.13”; Plaza: 0.11”; and Rugby: 0.93”. Additionally, the bare soil temperature at the NCREC is observed at 73 degrees F.

Crop disease remain relatively low at this time. Canola, were highly impacted from canola flea beetle earlier in the season, is now reaching a stage where the plant is growing enough to overcome previous damage observed a few weeks ago, however, the crop staging is a little bit delayed. NCREC canola field sites are showing lower populations of canola flea beetle as overwintering adults begin to die off. Wheat midge continues to be observed in the North Central region, however, numbers remain low. Please keep in mind, trapping by the NDSU IPM network is not connected to economic thresholds, rather, it is suggestive that scouting should be underway in the region. The Wheat Midge forecast application on NDAWN, suggests we could be reaching peak emergence soon. Grasshoppers are being observed in the region as well. Alexius Holter, the North Central IPM Scout, has yet to find numbers above threshold, however, some growers are finding localized areas with higher populations. Finally, blister beetle is being reported in western North Dakota alfalfa field sites. Please refer to Dr. Knodel’s article on blister beetles in today’s Crop & Pest Report.

Many small grains continue to progress rapidly with the warmer temperatures.  Area field sites are observed in the heading stages with some varieties beginning to flower (Figure 1). Canola fields are uneven, ranging from the 4th leaf stage to flowering, even within the same field site. Soybean stages vary from the V2-V6 leaf stage with very few nodules in fields with low surface residue. Field pea in the region are already flowering. As we look forward, a drier and warmer forecast seems to be part of the seven-day forecast. 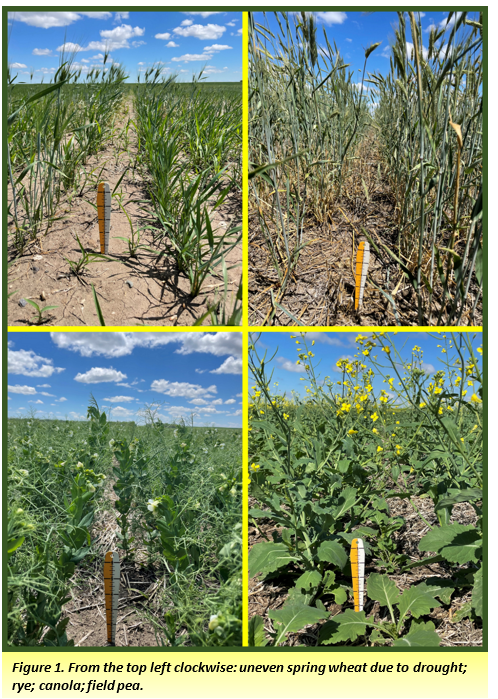