Scattered rain was observed this past week bringing some relief to the area. However, a dry pattern is still in place in the region with crops still dealing with drought conditions. Here are some quick precipitation reports as observed by area NDAWN stations over the last week (beginning June 29th): Minot: 0.35” (NCREC: 0.47”); Bottineau: 0.84”; Garrison: 0.19”; Karlsruhe: 0.07”; Mohall: 0.56”; Plaza: 0.05”; and Rugby: 0.43”. Bare soil temperature at the NCREC is observed at 84 degrees F.

Wheat midge numbers appear to be fluctuating. Many traps remain at a threshold of less than 10 midges observed over the past few weeks. However, a couple traps have reported higher numbers. One trap in the region was observed with 2500+ over the last week, however, the growing degree day (GDD) model for wheat planted on April 29th is at 1863 GDD days which is suggestive that control is no longer needed, except in some no till situations if economic thresholds are met. If thresholds are met in no till situations, control may only be needed until around 1900 GDD. Please keep in mind, trapping by the NDSU IPM network is not connected to economic thresholds, rather, it is suggestive that scouting should be underway in the region to determine if thresholds are met. Grasshoppers are being observed in the region as well. Reports of increased nymph numbers seem to be rising. A grower in NW North Dakota called in and reported they were above economic thresholds with damage to the flag leaves.

Warmer temperatures coupled with low amounts of rain are allowing small grains to progress rapidly. Small grains, on average, are in anthesis with some variable locations further along and others being a little behind. Canola fields are uneven, ranging from the 4th leaf stage to flowering. Soybeans are observed from the V2-V6 leaf stage (Figure 1) and corn observed from V4-V8 and with symptoms of drought stress. 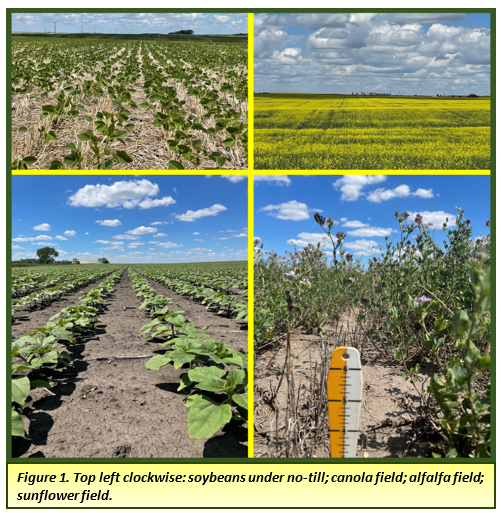