Since late May, our region’s crops have had to tolerate drouth and flooding (localized areas), high winds, frost, extreme high air temperatures (>100 degrees), and localized areas of hail, plus POST herbicide injury. The result includes reduced and variable crop plant populations with variable growth stages and most plants recovering (or attempting to recover) from injury.

Rain this week has been reported ranging from 0 to 10 inches (LaMoure County). The driest area of the region is generally north of Hwy 200.

Alfalfa is generally short in height and flowering with harvest in progress. Advanced winter rye is flowering and spring-planted small grain are jointing (6 to 7 leaves). Corn is in the 4- to 5-leaf stage and early planted soybean in the V1-2 (trifoliate) stages. Soybean replanting (due to frost and wind blow-out) is nearing completed along with dry bean and sunflower, with many fields of the later two crops containing emerged plants. Pastures are generally poor and hay (alfalfa and grass) have significantly reduced yield potential.

Weeds are our major crop pest threat at the current time and herbicide application is a common field activity. Late-emerging weeds are now present including the nightshades (see picture). Absinth wormwood and leafy spurge appear to be especially abundant this season! 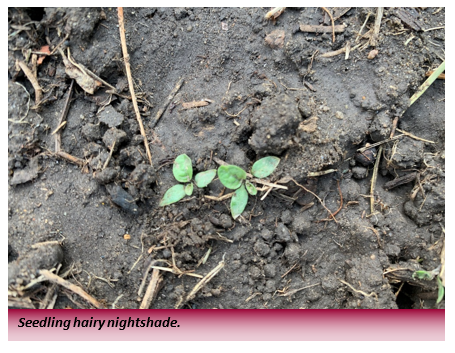