According to NDAWN, the region’s June 1-21 rainfall ranges from 0.5 inch (Zeeland) to 5 inches (Marion) and during the last 10 days the area north of I-94 generally received 0.5-1 inch. To be realistic, the region needs the later amounts of rain on a weekly basis for the next three months to have satisfactory row crop yield and seed quality.

Spring-seeded small grain are near heading to initial seed set. Potential grain yield appears well below average. If conditions continue, we may have significant transformation of the crop from grain to forage (see picture).

Corn generally is in the 5- to 8-leaf collar stages. Yield may not be substantially reduced if drought stress ends before the 13-leaf stage. The next yield determining factor of number of seeds per row on the ear is set at V12-15 leaf stages. Cool-season broadleaf crops are flowering including canola, field pea and flax. Sunflower currently appears to be the most tolerant broadleaf crop to drought while barley appears the least tolerant among cool-season grasses.

If corn fields low in zinc did not receive zinc fertilizer at planting time, is there a grain yield response with a foliar application? An average of 3 years of research at the Carrington REC indicates the following yield increase (soil generally low in P and Zn; treatments include 2.75 gpa in-furrow applied 10-34-0) with 0.25 gpa chelated zinc compared to the untreated check: in-furrow = 8 bu/A; foliar (application at V4-6 corn stage) = 3.3 bu/A. The current data indicates a more likely response with starter (seed placed) vs. foliar Zn. 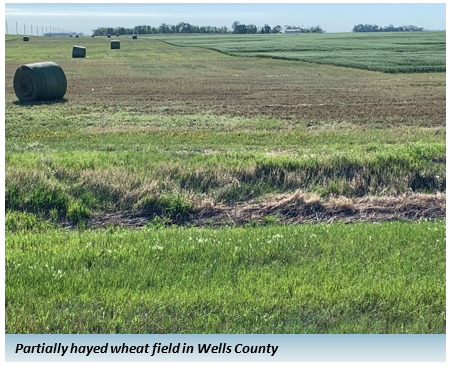