NDSU IPM scouts surveyed a total of 539 soybean fields and 299 sunflower fields in North Dakota during 2021. The survey was initiated in early June and continued through August 13. Crops were surveyed from the 2-leaf stage through R5 growth stage in soybeans and R6 growth stage in sunflowers. Some of the pest highlights for soybean and sunflower are summarized below. 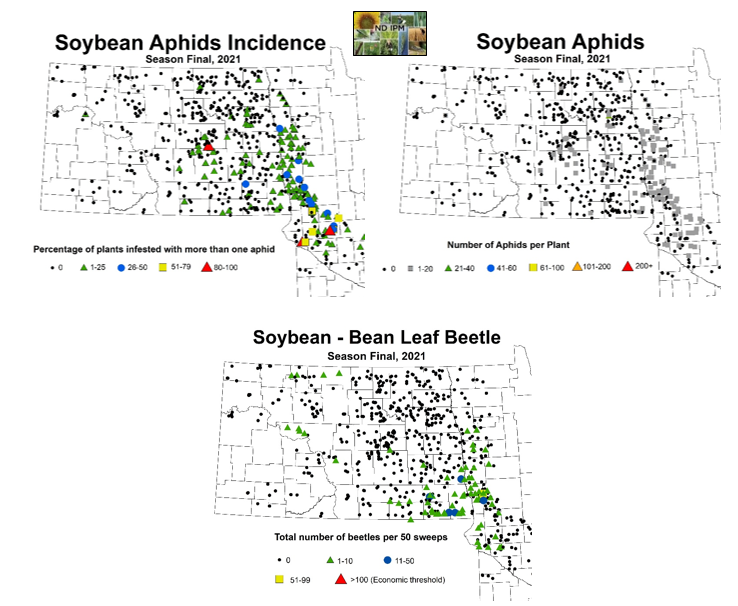 Although it was a hot, dry year, spider mites were observed in only 7% of the soybean fields scouted. Most scouting was completed when spider mites started to increase in severe drought areas, and were mainly a problem on field edges.

The invasive soybean gall midge was surveyed for in 48 counties and a total of 588 soybean fields. Fortunately, it was NOT detected in 2021 for a second year in a row. Good news for soybean farmers!

Red sunflower seed weevils were observed during flowering from late July through mid-August. The average number of weevils per head was 2.6 and ranged from 1 to 17 weevils per head depending on field site. About 65% of the total weevils counted were observed in the field edges versus 35% of weevils in the field (>50 ft). In 2021, the E.T. for red sunflower seed weevils was 4-6 weevils per head for oilseed sunflowers. Approximately 24% of the fields surveyed were above the E.T. and these fields required an insecticide application. The highest populations were located in southwest, north central and south-central areas of North Dakota.

Banded sunflower moth and Arthuri sunflower moth were monitored for using commercial winged pheromone traps and lures. Both moths were collected at all 10 trap sites throughout ND. The first moth was trapped early July and peak moth catch occurred from mid- to late July during R4 to early flowering. Traps that captured more than 100 banded sunflower moths per trap per week were located in 6 of the 10 trap sites including Benson, Cass, Cavalier, Foster, Golden Valley, and Stark Counties.

Sunflower moth also was monitored for using commercial winged pheromone traps and lures, and was collected at only 5 of the 10 trap sites. Sunflower moth migrates into ND and was first detected during early July. Peak catch occurred during late July through mid-August during mid-late flowering. Economic numbers of sunflower moths is   > 25 moths per trap per week, but no trap site reached this level in 2021.

Sunflower Diseases: The IPM scouts scouted for downy mildew and rust. Downy mildew was observed in two fields at 4% incidence in Barnes County and 30% incidence in Grant County. Sunflower downy mildew is favored by cool and wet weather after planting, and the warm and dry weather likely resulted in relatively low incidence statewide. Sunflower rust was observed at 3% incidence and 1% severity in one field, Steele County. Most scouting was completed prior to growth stages R5-R6, when sunflower rust commonly increases in the state. Reports of fields with rust in later growth stages (after the completion of the IPM Crop Survey) are occurring.

Acknowledgments:  Sincere thanks to the hard-working field scouts and insect trappers! We also appreciate the help of Darla Bakko, NDSU Dept. of Plant Pathology, for data compilation, and Dr. Honggang Bu, NDSU Dept. of Soil Science, for ArcMap programming. This survey is supported by the Crop Protection and Pest Management Program [grant no. 2017-70006-27144/accession 1013592] from the USDA National Institute of Food and Agriculture.