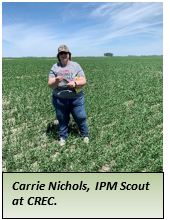 NDSU IPM scouts surveyed a total of 678 wheat fields (winter wheat, hard red spring wheat, durum wheat) and 119 barley fields for 18 diseases and 6 insect pests in North Dakota. The survey started on June 1st and continued through August 13th. Crops were surveyed from the 2-leaf stage (seedling) through ripening stages. IPM survey data/maps provided near real-time pest information to North Dakota farmers and others in agriculture to assist with scouting and pest management decision making. Pest maps from the 2021 IPM Crop Survey in North Dakota were uploaded weekly onto the NDSU IPM website. Please note that the website address will be changing in the near future. Some of the pest highlights for wheat and barley are summarized below. 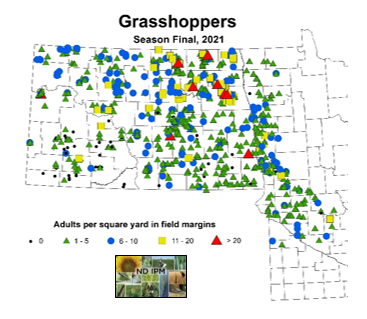 Wheat stem maggot was observed in 15% of wheat fields surveyed in ND and damaged white heads ranged from 1-24% of plants sampled. In 2021, wheat fields with >20% damaged heads were observed in northeast (Nelson, Walsh counties).

Wheat stem sawfly declined from 2020 and was collected with sweep nets in only 2% of the wheat fields surveyed during mid-June though early July in 2021. Wheat stem sawflies were most common in the northwest (Burke, Divide, Mountrail, Williams Counties); and north central (Bottineau County) areas. Areas with more intense drought could have increased wheat stem sawfly survival for next year.

Barley thrips were low and observed in only 3 barley fields in Trail, Foster and McLean Counties. 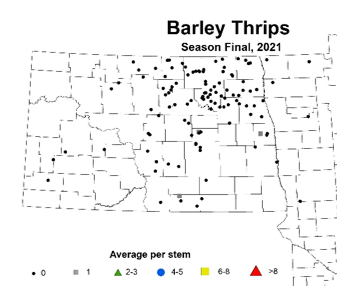 Foliar Diseases of Wheat and Barley:

Disease incidence in 2021 wheat fields was extremely low this year. The low amount of rain, low humidity, and higher than average temperatures in June drastically reduced disease risk. Tan spot was detected in 4% of the fields and bacterial leaf streak was detected in less than 1% of the fields. Leaf rust was only reported from NDSU research plots with no reports from agronomic fields. Foliar disease was also very low in barley fields this year. Fusarium head blight (scab) risk was low in 2021. Less than 1% of the fields had Fusarium head blight, and in those fields, low index values (field severity) were reported. A significant amount of the small grain crop started to head in mid-June at a time during hot temperatures and low humidity 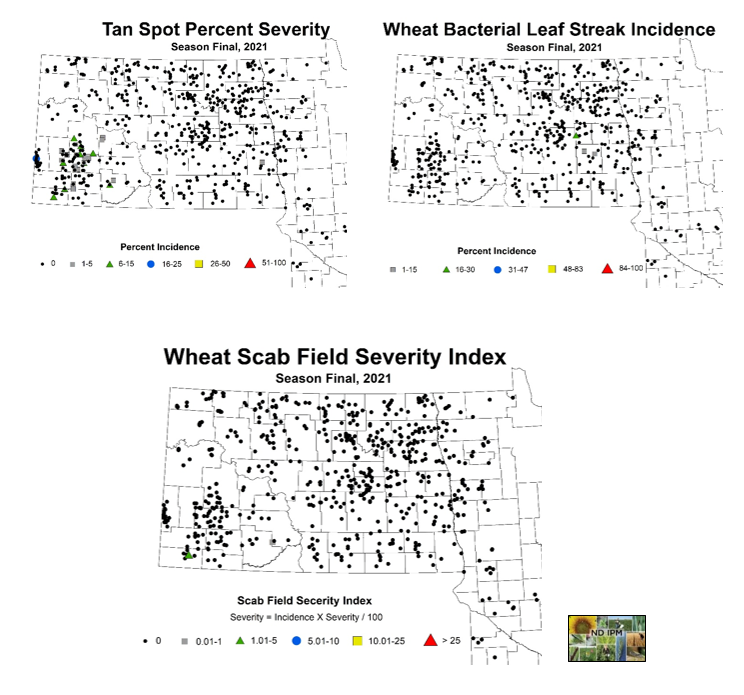