Ash gray blister beetles, Epicauta fabricii, were reported in faba beans and lupine fields in east central and north central areas of ND (Source: T.J. Prochaska, NCREC; G. Endres, CREC). The ash gray blister beetle is approximately ½ inch in length and gray. Adult blister beetles can be an occasional pest of field crops causing defoliation to the leaves and clipping flowers or pods. Blister beetles are mobile and gregarious, and often congregate in certain spots in a field. In some instances, blister beetles only feed for a short period and then migrate to other fields. Larvae of blister beetles in the genus Epicauta are beneficial insects and actively prey on grasshopper egg pods.

Blister beetles are a major problem in alfalfa / hay fields or in bales, since they produce a toxic chemical (cantharidin), which is toxic to livestock, especially horses. Alfalfa and forage are preferred hosts of blister beetles and they often move into canola or other field crops after the alfalfa is cut. In canola, they are attracted to blooming canola fields for its nectar and pollen, but they also devour leaves, flowers and pods.

If treatment is necessary to avoid yield loss, producers can ‘spot treat’ with a foliar insecticide registered in that crop. Please avoid spraying flowering crops, for bee/pollinator safety. 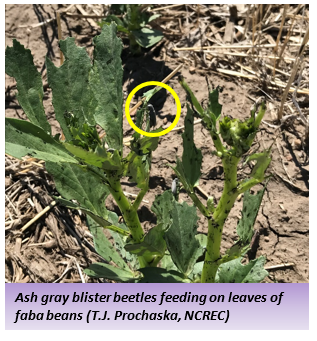