With warmer temperatures occurring in most of North Dakota, flea beetles will be more active in areas with emerged canola fields. Flea beetles and feeding injury to young canola fields have been reported by Ryan Buetow at the Dickinson REC, Lesley Lubenow at the Langdon REC and Steve Zwinger at the Carrington REC. Populations have remained low at the North Central REC site likely due to cooler overnight lows last week and cooler high temperatures of the weekend. Warm and dry weather can promote flea beetle flight and feeding activity. However, a brief cool down (forecasted 50-60s F) with some precipitation chances may slow their feeding and movements into canola fields before warming up towards the end of the week.

Flea beetles overwinter in the adult stage from leaf litter of grassy areas and shelterbelts. Beetles emerge in the spring as temperatures warm to 57-59° F. Flea beetles will feed on weeds (i.e., wild mustard) and volunteer canola before moving into spring planted canola fields. One generation of flea beetles is observed per growing season before adults search out overwintering sites in the fall. 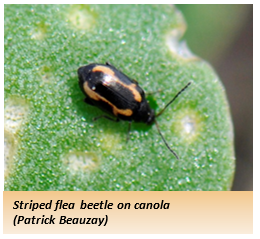