Sunflower crop stages were in the R1 (terminal bud) to R5.7 (70% flowered) stages last week in scouted IPM fields or in fields with IPM traps.

Trap captures for banded sunflower moth and Arthuri sunflower moth continued to increase for the third week in a row from a total of 973 moths two week ago to 1422 moths last week. The highest trap numbers of banded sunflower moths (>100 moths per trap per week) were located at trap sites in Cass, Foster, Benson, Cavalier, Golden Valley and Stark counties (see map).

Look for sunflower moth when scouting for other moths and red sunflower seed weevils. This ⅝ inches inch long, grayish-tan moth migrates into ND sunflower fields during bloom. Eggs are laid on the face of the early flowering fields. Eggs hatch in 48 to 72 hours into larvae. Mature larvae are about ¾ of an inch long and have light longitudinal stripes on a brown body. Larvae cause feeding injury to the sunflower head by tunneling through immature seeds and the back of the head. Insecticide should be applied in early flowering (R5.1 - R5.3) when above the E.T. 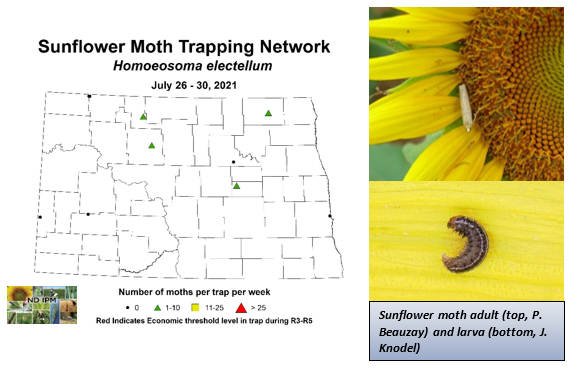 RED SUNFLOWER SEED WEEVILS were detected at 45% of the sunflower fields scouted last week, but only 12.5% were at the economic threshold of >3-4 weevils per head. Continue to scout for weevils until sunflowers are past the susceptible crop stage, R5.7 (70% flowered). 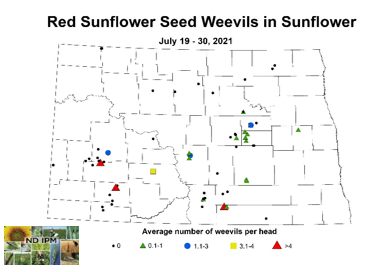