Wheat midge is an economic insect pest of hard red spring wheat and durum wheat in the northern tier of North Dakota. Soil samples collected in North Dakota wheat fields indicate low levels of overwintering wheat midge larvae (cocoons) for the 2021 season. A total of 205 fields were sampled from 22 counties in the fall of 2020 to estimate the statewide risk for wheat midge in the 2021 field season. The distribution of wheat midge is based on unparasitized cocoons found in the soil samples.

The moderate risk level (201 to 500 midge larvae per square meter, blue dot on map) was observed in 1.5% of the samples. Moderate risk areas were scattered in three counties throughout the state, including the central area (Wells County), the west-central area (McLean County) and the northwestern area (Divide County).

Only 0.5% of the soil samples had very high population densities of wheat midge (greater than 800 midge larvae per square meter, red triangle on map). The hot spots were located in south-central Divide County, close to the Williams County line and southeastern Mountrail County. These areas will definitely need to be scouted for wheat midge to make effective management decisions. Insecticides may be needed to reduce yield losses from economic populations of wheat midge.

This dramatic decrease in wheat midge populations from 2019 is probably due to dryness in 2020, especially in August. Larvae are susceptible to dryness and require rain to emerge from the soil in late June through mid-July, and to drop out of the mature wheat heads and dig into the soil to overwinter as cocoons. Plotting precipitation from May through August against wheat midge cocoons for each surveyed county over the past 10 years shows a strong positive correlation between precipitation and wheat midge populations.

Scouting for tiny, orange adult flies is always recommended because any areas with moist soils can cause rapid increases in the number of midges during emergence. Some tips for monitoring for wheat midge include scouting during the night, when wheat midge is most active, warm night temperatures about 59 F and winds less than 6 mph. Wheat is most susceptible to midge infestations from heading to early flowering (less than 50% flowering). 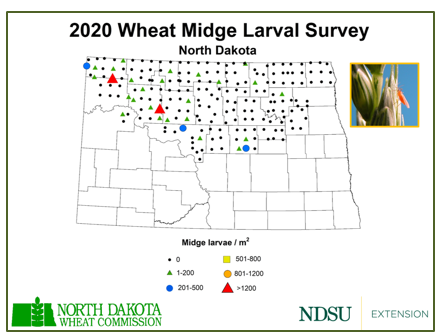 Wheat midge emergence is starting in the northern tier of North Dakota. Since conditions are dry this year, larvae also could remain in extended diapause for at least one additional year and emerge in 2022. See wheat midge AGDD map. 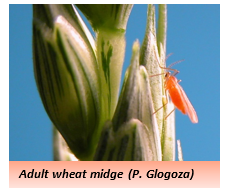 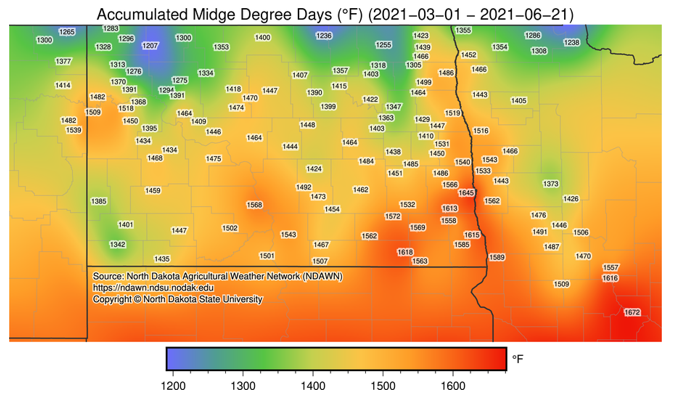 Producers are encouraged to use the wheat midge degree-day model to predict the emergence of wheat midge, to determine when to scout, and if their wheat crop is at risk. Producers can access the wheat midge degree-day model on the North Dakota Agricultural Weather Network (NDAWN) website. Select your nearest NDAWN station and enter your wheat planting date. The output indicates the expected growth stage of the wheat and whether the crop is susceptible to midge infestation, as well as the timing of wheat midge emergence.

Although the forecast is good for wheat growers to avoid the ravages of wheat midge, the bad news for 2021 is that the beneficial parasitic wasp is at a historic record low, with only 1.5% of the wheat midge cocoons parasitized. Parasitic wasps play an important role in natural control of wheat midge by parasitizing the egg or larva. In contrast, the parasitism rate was 15% in 2020, 36% in 2019 and 9% in 2018. Parasitism was only observed in Williams, Mountrail and Ward counties.