The summer population of flea beetles has emerged earlier due to warmer temperatures and are in large numbers. Flea beetles were reported feeding on pods in canola fields near Warren, Minnesota.

Research conducted at Agriculture and Agri-Food Canada in Saskatoon, Canada found that late summer feeding by flea beetles is rarely economically damaging (Soroka and Grenkow. Can. J. Plant Sci. 2012: 97- 107). “Flea beetle feeding that occurs when seeds in lower pods of canola are at the green stage or beyond is unlikely to affect seed yields regardless of the infestation rate of flea beetles. Even when seeds are translucent to green, numbers higher than 100 flea beetles per plant, and for some cultivars higher than 350 per plant, may be necessary to cause significant yield reductions.” (Source: J. Gavloski, Manitoba Crop Pest Update #13, August 14, 2019)

Flea beetle feeding injury on pods is usually most significant on late-planted canola and on the upper pods. Fortunately, the lower pods of canola are the primary pods that provide most of the canola yield. However, flea beetle feeding injury on pods can result in poor seed fill, premature pod drying, or pod shattering. If the canola is mature, past the 5.2 growth stages (when seeds in lower pods have turned translucent to green), then yield will be less impacted by flea beetle feeding. In a flea beetle trapping study of freshly swathed canola, the number of flea beetles per trap decreased dramatically after 7-days of drying in swaths. Flea beetles are mobile insects and fly around to find ‘greener’ canola fields (late-planted) or other cruciferous host plants like backyard garden vegetables or flowers for summer feeding. 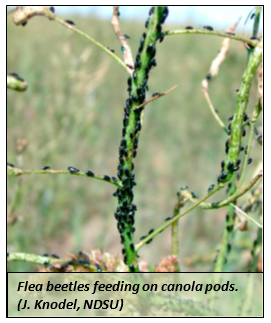