Soybean aphid numbers increased slightly and were observed in about 28% of the soybean fields scouted last week, mainly in the east central areas of ND and west central MN. The percent of plants infested ranged from 3-94% with an average of 1-9 aphids per plant among the positive observations. All soybean fields were below the economic threshold (average of 250 aphids per plant and 80% incidence). 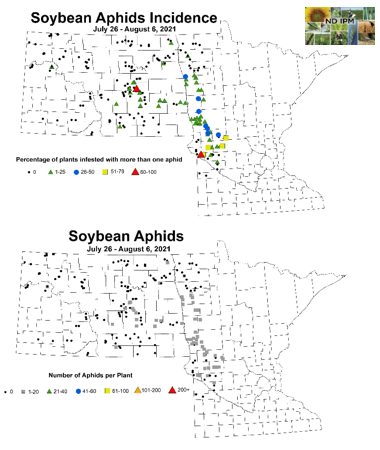 Spider mite infestations increased on field edges and were observed in 38% of soybean fields surveyed last week, compared to only 14.5% one week ago and 3% two weeks ago. Spider mites are also being found in the interior of fields in about 26% of soybean fields surveyed last week. More field spraying for spider mites in eastern ND has been reported, and we have received many calls on what to use for control. See the previous Crop & Pest Report #13, July 22, 2021 for more information on scouting procedures and pesticides for spider mite control. Spider mites will continue to feed and cause injury on soybeans through R6.

Grasshoppers were detected in 89% of the IPM fields (including wheat, barley, soybean, sunflower) scouted last week. Grasshoppers will continue feeding until crops mature or are harvested, or a hard frost occurs. This week’s photo shows grasshopper damage in a canola field near Velva, ND.

Armyworm and Black Cutworm Trapping Network in Wheat - True armyworm increased in the northeast and north central trap sites. However, black cutworm decreased significantly. True armyworms were detected at 30% of the trap sites and increased from a total of 15 moths captured 2 weeks ago to 115 moths this past week. Black cutworms were detected at 10% of the trap sites with low numbers of moths captured, a total of 2 moths last week. Most crops are either being harvested or past susceptible stages for significant feeding injury by these insect pests. This is the last trap report. Trap maps can be found at: https://www.ag.ndsu.edu/ndipm/wheat-insect-trap