Populations of potato leafhoppers are increasing in dry edible beans in eastern North Dakota and in north central Minnesota, near Park Rapids. Potato leafhopper is a migratory insect pest. Adults are quite mobile and move from field to field, and may migrate from freshly cut alfalfa fields. Other crops attacked include potato, dry bean and soybean. The small (⅛ inch), pale green, wedge-shaped adults move rapidly by jumping. Nymphs are paler green, lack wings and exhibit a characteristic sideways walk when disturbed. Nymphs can be found on the undersides of leaves.

Damage by leafhoppers is referred to as hopper-burn. Foliage becomes dwarfed, crinkled and curled. Small triangular brown areas appear at the tips of leaves, gradually spreading around the entire leaf margin. Nymphs are generally more damaging than adults, since they feed for several weeks on the leaves where they hatched.

Sweep nets are useful for confirming potato leafhopper presence in a field. Fields need to be scouted to determine whether economic populations are present by sampling at least 5 sites while walking a W-pattern and inspecting about 10 plants per site. Avoid sampling the edges of field. Examine the underside of leaves for adult and nymph leafhoppers. Follow these economic thresholds to help make insecticide spray decisions for potato leafhoppers:

Dry bean = 1 leafhopper (either adult or nymph) per trifoliate leaf 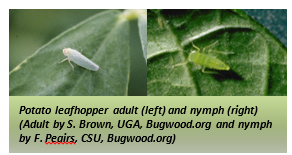