Increasing numbers of bean leaf beetles (BLB) have been observed recently in southeastern ND, especially south and west of Wahpeton. Adults are yellow-green to reddish-brown and have four black spots (or no spots) with a black border on wing covers. The black triangle at the top of wing covers is always visible and used to identify this beetle.

The new generation of BLB adults are emerging (August) and feeding on foliage and pods. Feeding injury to leaves appears as small round holes between the leaf veins. Injury to pods appears as lesions similar in size and shape to leaf-feeding holes. This late season BLB feeding on the foliage and pods is more important than early season feeding of the overwintering adults. Late feeding may increase the risk of pod clipping, virus transmissions and secondary infections (rotting and discoloration) from fungi and bacteria. Although bean leaf beetle can vector viruses like bean pod mottled virus (BPMV), this had not yet been recorded in ND.

Bean leaf beetles are fast-moving so sweep nets are a good tool to detect beetles hiding in the soybean canopy. Treatment thresholds are based on either defoliation or number of beetles per plant. 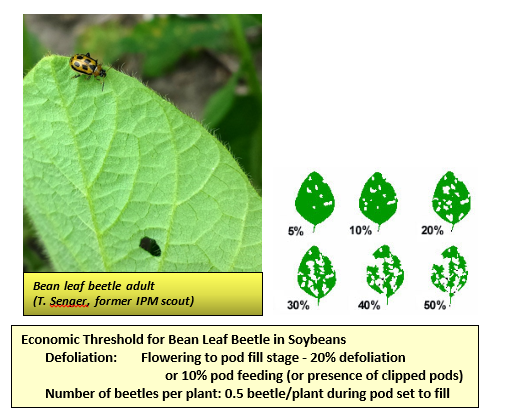