The first soybean field infested with low incidence of soybean aphids (6% of plants infested, average of 1 aphid per plant) was found in Grand Forks County last week (Source. Katelyn Landeis, Grand Forks County Extension Agent). Soybeans were in the seedling to V4 growth stage. No treatment is recommended at V3 to V4 stages and is discouraged so that insecticides do not reduce the presence of predators and parasitic wasps. It is early for soybean aphids in North Dakota. With temperatures moderating in the upcoming weeks, aphid reproduction conditions in the low 80F will be favorable. Soybean field should be scouted at least weekly from the late vegetative stages through R5 (beginning seed). Look for the colonies of soybean aphids in the top tender leaves and undersides of leaves during early vegetative through early reproductive stages.

Soybean aphid is light yellow with black cornicles (“tail-pipes”). As with other aphids, soybean aphid is small, about ⅛ inch long. Nymphs (or young) are smaller yet.

Aphids suck fluid from plants. When infestations are large, infested leaves are wilted or curled. Aphids excrete honeydew, a sweet substance that accumulates on surfaces of lower leaves and promotes the growth of sooty mold. Soybean aphid colonizes tender leaves and branches from early vegetative through reproductive plant stages. Later, as vegetative plant growth slows, the aphids slow their reproductive rate, move down to the middle and lower part of the plant, and feed on the undersides of leaves. Toward the end of the season the colonies again begin to rapidly increase in number.

Minor stippling on lower leaves from spider mites also was observed on field edges in western Grand Forks County (Source. Katelyn Landeis, Grand Forks County Extension Agent). Scout for spider mites when out looking for soybean aphids. Examine the underside of leaves and lower foliage at the field edges first for tiny mites and fine spider-like webbing. A quick sampling procedure to determine whether mites are present is to hold a piece of white paper below leaves then tap them to dislodge the mites. The mites appear as tiny dust specks; however, they will move slowly after being knocked off the leaf. Dislodged predatory mites will move faster than the two-spotted spider mite. 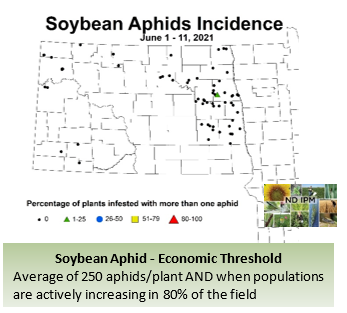 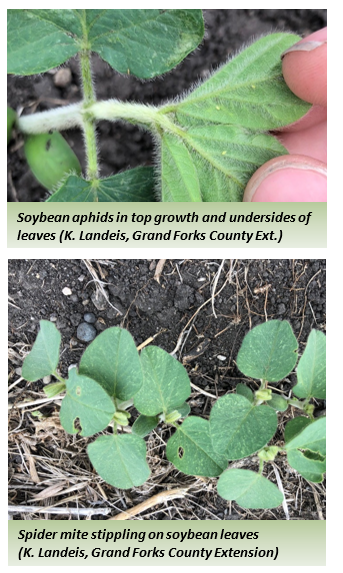