Throughout the state, many birch trees had a very tough winter.  Some trees are showing dieback or small leaves in just the top part of the tree, while others appear to be completely dead or nearly so (see photos).  Many different species and cultivars have been affected, including Dakota Pinnacle® Asian white birch, European white birch, river birch, and others.

We believe the damage is due to the warm temperatures in March, which were followed by a return to freezing temperatures in April.  The trees began to break dormancy early, and were unable to re-harden once it got cold again.  Top dieback on birch trees is normally associated with bronze birch borer, a native insect that attacks drought-stressed birch trees.  However, the damage we’re seeing is affecting trees in well-watered areas that have not suffered drought.  Also, the state-wide pattern of damage goes far beyond what we would expect from insect damage.

ome trees did appear to push out small leaves this spring, while others did not.  A quick way to tell if a branch is dead is to do a scratch test.  With a fingernail, scratch off a small piece of bark on a small branch, one that’s the size of your finger or smaller.  If the branch is green, then it might be alive.  If there is no green, then the branch is definitely dead.

If the branch or stem is dead, it can be pruned out at any time.  The trees will send out one or more new upright shoots that may, over time, be trained into new leaders for the trees.  However, this will take several years and much effort, and the ornamental structure of these trees will be compromised for a long time.

If the tops of the trees are not dead, then all we can do is wait it out and see what happens.  And make sure the tree has enough moisture.  Water if there’s been no substantial rain for about 7-10 days.  The soil should be moist after watering, not waterlogged. 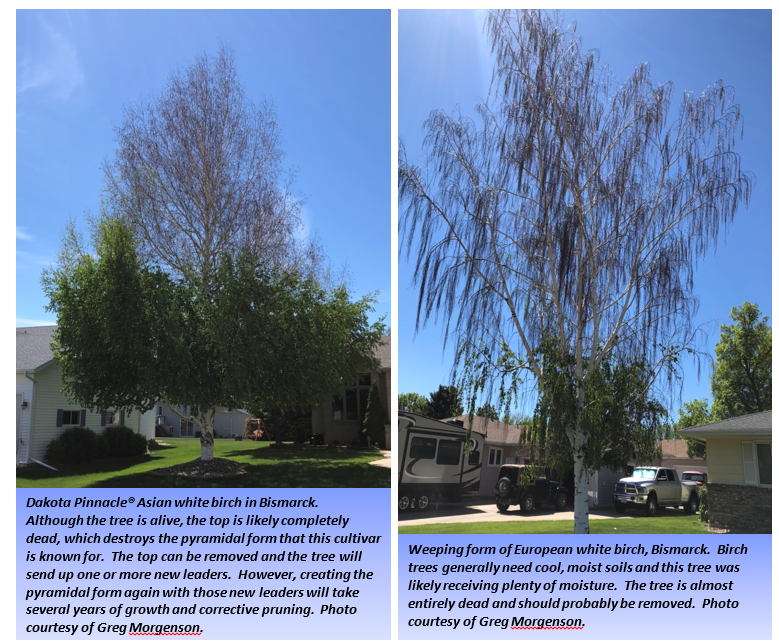