As canola is swathed or harvested, flea beetles, mainly Phyllotreta species, move in large numbers into town gardens to feed on crucifer vegetable plants and flowers. Flea beetles are small, oval-shaped, dark beetles with an iridescent blue sheen on the black wing covers, measuring about ⅛ inch in length. Flea beetles have enlarged hind femora (thighs) on their hind legs, which they use to jump quickly when disturbed. Flea beetles feed on many vegetable crops - radishes, broccoli, cabbage, turnips, eggplant, peppers, tomatoes, potatoes, spinach and melons. They also like several flowers, like baby’s breath and nasturtium. Flea beetle feeding injury causes pitting and irregular holes in the leaves or defoliation.

It is best to cover the Brassicacae vegetables or flowers with a garden row cover cloth, since garden / flower insecticides labeled for homeowners will only provide partial control of flea beetles and require repeated applications to protect plants. I don’t know too many people who want to eat vegetables that are sprayed with multiple applications of insecticides, and insecticides on flowers can harm beneficial pollinators. For flowers, another alternative is to pull infested flowers out and plant marigolds, geraniums, or petunias, flowering plants that are disliked by flea beetles. Consider these flowers for next year, too.

It will take multiple applications at weekly intervals or 2+ sprays per week depending on flea beetle densities. Please avoid spraying insecticides on flowers during the day when pollinators are foraging. To mitigate pollinator mortality, spray in late evening after 9 PM or before 7 AM. I personally do not recommend spraying any insecticides on flowers or when plants are blooming. I usually cut off all of the blooms before spraying, then spray in late evening or early morning and cover plants until the insecticide is dry (to keep the pollinators off of them).

Please always read, understand and follow the pesticide labels for instructions and rates. It’s the law! 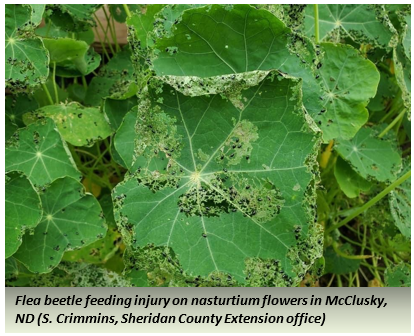