We are starting to see the first stages of sunflower rust appear. IPM scout Tommy Crompton snapped a picture of the aecial stage of rust in a sunflower field last week (Figure 1). Aecia are characterized by a cluster of orange cups that occur on the underside of sunflower leaves (Figure 2); opposite the aecia on the topside of the leaf will be a relatively non-descript orange bumps approximately 1/8-1/4 inch in diameter (Figure 3). Aecia produce aeciospores, which infect sunflowers and produce the characteristic cinnamon-brown rust pustules (uredinia). Once uredinia form, the uredinia cycle will repeat every 7-14 days in favorable conditions.

Sunflower rust can cause yield loss when the disease appears early and conditions remain favorable (warm temperatures and dew or fog). Several fungicides are very efficacious against rust and may be a viable economic option if the disease becomes an issue later in the season. For now, I suggest you be prepared to scout for rust before bloom. I will include more information on scouting and management in upcoming Crop and Pest Report articles.

For more images and information on sunflower diseases in our region, including rust, visit: 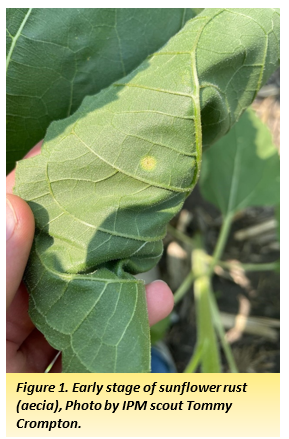