The dry weather and low humidity have drastically lowered disease occurrence in wheat and barley. The hard working IPM scouts in the past two weeks have reported tan spot in less than 2% of the wheat fields (Figure 1). Loose smut (seed-borne) disease has been reported from a few fields and this disease can be observed in both dry and wet years. 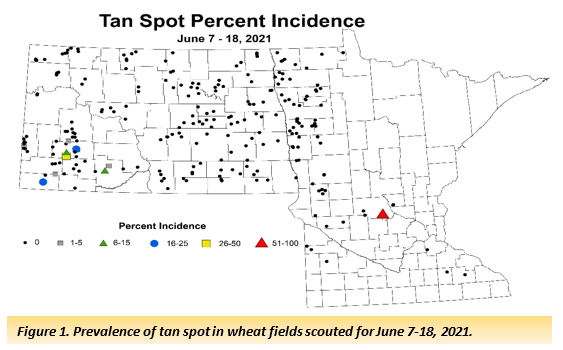 I had the chance to visit a few research locations last week and scouted for foliar diseases in variety trials. At the Agronomy Seed Farm, I found one leaf rust pustule and a few tan spot lesions in a winter wheat variety trial. Both of these diseases were found in a plot near a shelterbelt of trees (higher humidity and better chance of dew). I spent another 20 minutes looking for rust (and other diseases) and struggled to find disease in the other variety strip plot trials.

Scab risk remains low for soon to be heading or flowering small grains in the entire state. I am expecting scab risk to remain low for at least seven days as hot and dry weather is forecasted through the Fourth of July weekend.

Reports of aphids in the fields may lead to future reports of barley yellow dwarf (BYD). One of the primary symptoms of BYD is yellowing/purpling/reddening of the flag leaf tip towards the stem of the plant. Yield loss to BYD is greatest when infection occurs early in plant growth development. Given that the crop is further ahead this year, field wide occurrence of BYD will be rare.

I am expecting that reports of bacterial leaf streak (BLS) may increase in the next week, due to severe thunderstorms that help initiate new infections. Early symptoms of BLS include linear streaks of water-soaking (Figure 3) that eventually turn yellow and brown. Compared to the previous two growing seasons, field reports of BLS will likely be much lower this year. 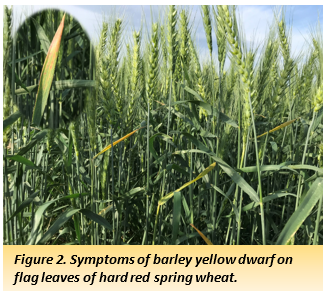 Root rots (Fusarium root, crown and foot rot; common root rot) of small grains are more common during years of moisture and temperature stress. Most infections occur early in the season and take advantage of a weakened plant leading to plant death. Small pockets of dead (white) plants are one of the first things to scout for in a field (Figure 4). On infected plants, the entire plant will be white, have an empty head, have a poorly developed root system (easily pulled out of ground), and likely have lesions on the crown, subcrown internode and/or roots. 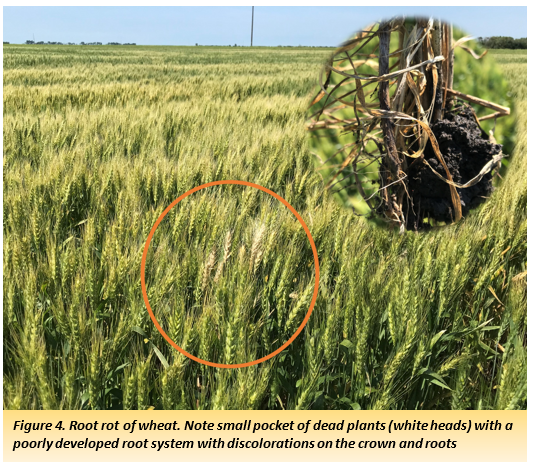