Currently, I am not getting calls about dry bean rust, but anticipate that it may appear soon. Scouting for dry bean rust is important even in a dry year. The disease definitely won’t occur everywhere, but if it is identified it can be managed with fungicides. Dry edible bean rust can occur in dry years and is favored by moderate to warm temperatures. Like other rusts, the pathogen needs free moisture (leaf wetness, dew, fog, etc.) to infect; not necessarily rain. Dry bean rust infection is also influenced by microclimates. Open and/or thin canopies make the microclimate less favorable for dew and less favorable for rust, while a lush dense canopy makes heavy dew and rust infection more likely.

Signs and Symptoms. Dry bean rust is usually first found on the lower leaves of bean plants in ‘hot spots’, which are clusters of plants with relatively severe damage (Figure 1). Hot spots are often small (a few feet to several yards in diameter) and can occur anywhere in a field, but are more common near shelter belts or last year’s crop residue. Rust is usually first observed on the upper sides of the leaves and appear as dusty cinnamon-brown pustules that may be surrounded by a small yellow halo (Figure 2). Pustules on the undersides of the leaves may appear more robust and lack the yellow halo (Figure 3).

Scouting. While rust can occur anywhere, I tend to look for the disease first near shelterbelts or where fields are close to the previous year’s crop. Shelterbelts create a microclimate very favorable for dew formation (less wind, greater shade, etc.), which is optimal for rust infection. Dry bean rust can survive the winter in North Dakota, so often we see it show up first where a field is close to previously infected residue. Other areas in a field you might scout first include anywhere more prone to free moisture (foggy areas or areas with particularly dense canopies). Remember to focus on the low to mid canopy, where the microclimate is most favorable. Its relatively rare to see rust on the upper leaves until later in the season.

Management. Dry edible bean rust can cause significant yield loss when the disease occurs early in the growing season, and conditions remain conducive for infection and spread. A hot-spot can turn into a full blown epidemic in just a few weeks. The best timing for a fungicide application to manage rust is shortly after it is first found. However, fungicides are not needed (or impactful) if rust is found in later growth stages (for example, once pinto’s begin to stripe, fungicides are no longer economic). QoI fungicides [strobilurins: FRAC 11] (Headline, Quadris, Aproach, etc.), DMI fungicides [Triazole: FRAC 3] (Proline, Quash, tebuconazole generics, etc.) and mixtures containing these products (Priaxor, Propulse, etc.) have been the most efficacious in our trials. Fungicides with other modes of action, some of which are more commonly applied for white mold (Endura, T-methyl, etc..), can still reduce disease onset, but are less effective once rust is occurring. As always, exceptions to the general rules have occurred. 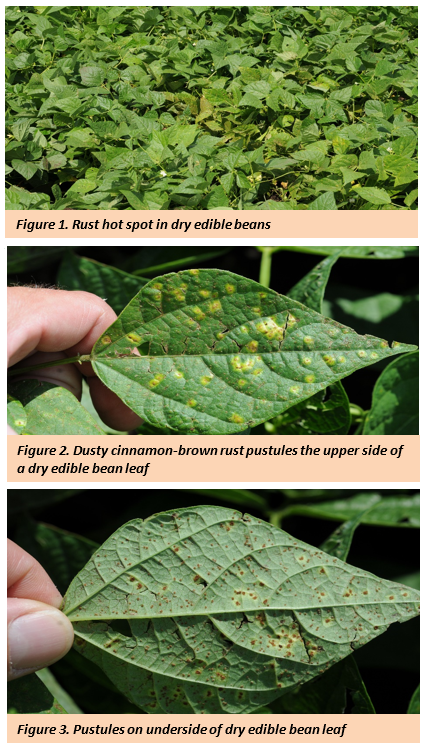