Cercospora leaf spot (CLS) (Figures 1 and 2) is the most damaging foliar disease of sugarbeet in North Dakota, Minnesota, Michigan and Montana. The causal agent of CLS is the fungus Cercospora beticola which is most damaging in warm weather (day temperature of 77 to 90° F and night temperature above 60° F) and in the presence of moisture from rain or dew on the leaves for 8 or more hours. The fungus destroys the leaves and thus adversely affects photosynthesis. The longer and more severe the infestation, the greater the reduction in root yield, sugar concentration and recoverable sucrose. Higher impurities in roots of infected plants results in higher processing costs and reduces the throughput of the factory.

Growers should check with their respective cooperatives for recommendations made for specific factory districts.

The best way to control CLS during the growing season is to apply effective fungicide mixtures in a timely manner. For ground application, apply fungicides in 15 to 20 gallons of water per acre at 60 to 100 psi pressure; aerial applicators should use 3 to 5 gallons of water per acre. Since C. beticola has developed resistance to multiple fungicides, and most individual fungicides have become less efficacious, all applications should be a mixture with different modes of action.

In field research trials, the use of triphenyltin hydroxide (TPTH) in a mixture with either an EBDC (such as Mancozeb/Penncozeb/Dithane) or copper (such as Badge/Champ/Cuprofix) in an alternation program with a triazole (such as Proline/Minerva/Inspire XT/Provysol) in a mixture with either an EBDC or copper provided good to excellent control of CLS (Figure 3) - in years when the fungicides were not washed off by heavy rainfall after applications. Another strategy that will work will be using mixtures of TPTH, copper products and EBDC fungicides in a rotation program at 14-day intervals during dry conditions (Figure 4) and 10 to 12 day intervals when there is more rainfall.

The availability of new and improved CLS varieties (CR) in some factory districts will be useful in managing CLS. In field trials, it was observed that new CR varieties, even in the absence of fungicides, were least affected by CLS and yields were significantly higher than CLS susceptible varieties that were sprayed multiple times (4 to 6) during the wet 2020 growing season (Figure 5) that was favorable for disease development. 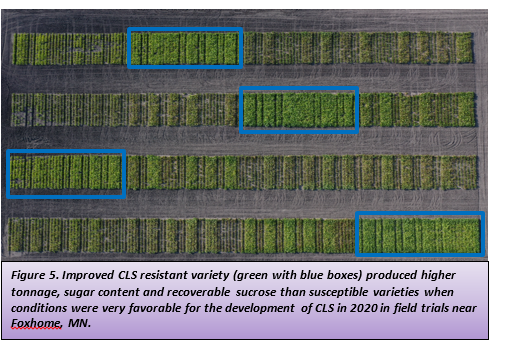