We have been getting reports of sunflower rust, and suggest that growers scout for the disease. Sunflower rust is favored by moderate to warm temperatures, which we have had all summer. Importantly, rust does not need rain to infect, only periods of leaf wetness, such as dew. The disease can cause yield loss, but can be managed with a fungicide application. Confection-type sunflowers are particularly sensitive to rust, but oilseeds can be susceptible to the disease, as well. Yield and quality losses can be very high if an epidemic develops early in the season. Not all fields will have rust; prevalence can be impacted by weather, genetic resistance and pathogen races in the region. So, scouting is important.

Sunflower rust is specific to sunflower. Unlike the rusts on some crops (wheat, corn, etc.) the pathogen overwinters in North Dakota and does not need to blow up from the southern states. This makes it appearance a little less predictable, and heavily dependent on weather and microclimates in the sunflower fields.  The disease is often observed first near shelter belts (where the plants have longer dew periods), near last year’s sunflower residue (where rust may overwinter) or near wild/volunteer sunflowers (also overwintering hosts). The first signs of rust (which are not always observed) are the small orange aecia cups discussed last week.

Spores from the aecia will eventually lead to formation of the characteristic cinnamon-brown and dusty pustules, often first found on the leaves in the lower canopy (Figure 1). If rust is found in the lower canopy, it often will appear on the upper canopy later in the season. If an epidemic occurs, pustules may be found on stems, petioles and leaves. 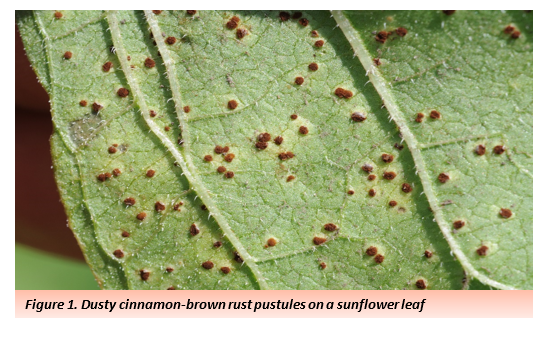 Timing. If rust reaches approximately 1% severity on the upper four fully expanded leaves at or before bloom (R5) a fungicide should be considered (Figure 2-3). At R6 or later (after bloom) fungicide applications do not commonly impact the yield in our trials.

Efficacy. The National Sunflower Association keeps a robust and searchable database of research reports https://sunflowernsa.com/Research/searchable-database-of-forum-papers/ and presentations https://sunflowernsa.com/Research/Research-Forum-PowerPoint-Presentations-Since-2008/ on their website: https://www.sunflowernsa.com. NDSU Ph.D. student Brandt Berghuis presented a three year summary of sunflower rust trial work a couple years ago, and the summary is available with graphics [https://sunflowernsa.com/uploads/81/1.Berghuis_etal_3yr.summary_2019.pdf] and as a printed report [https://sunflowernsa.com/uploads/research/1343/Berghuis.etal_3yr.summary.fungicide.trials.rust_2019v5.pdf]. In short, he found that DMI fungicides [FRAC 3: Triazole] and QoI fungicides [Strobilurin: FRAC 11] and pre-mixes containing those modes of action tended to be the most effective in our trails; not all available products were tested. I encourage growers to use the NSA website when searching for data on numerous topics, and hope that is helpful if you manage rust. 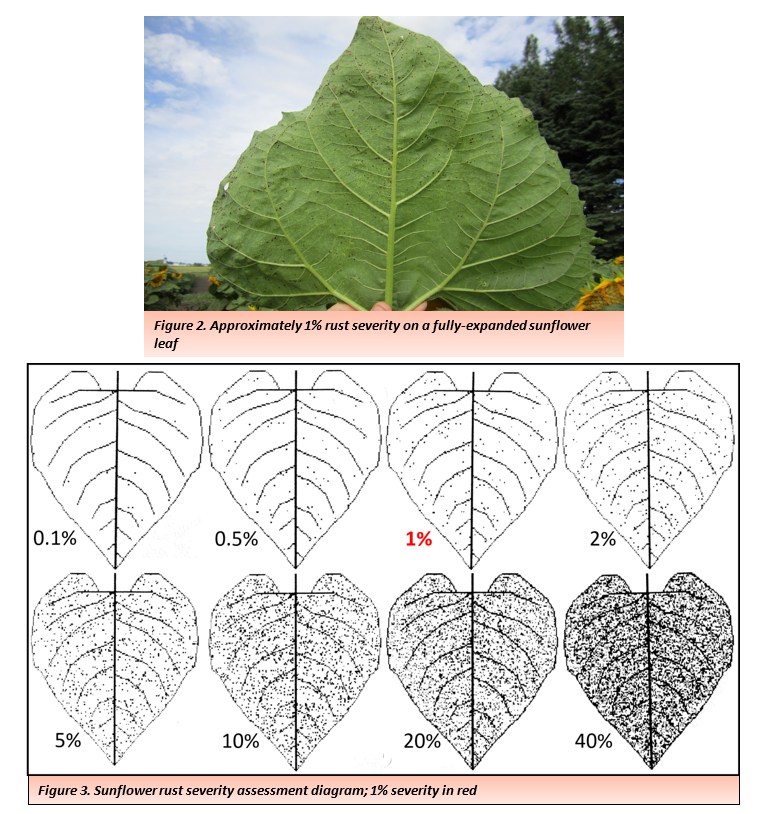