Soybean Cyst Nematode (SCN) is the 2,000-pound gorilla in the room. Nationally, SCN is estimated to cause more yield loss then the next three to five most important soybean diseases. And, it makes diseases like sudden death syndrome (above) and brown stem rot worse.

Thanks to the grower-based SCN sampling program supported by the North Dakota Soybean Council and operated by NDSU Extension, we do have a good understanding of where SCN occurs in the state. High levels of SCN (as measured by egg counts) occur throughout the Southeast and East Central parts of the state, with expanding prevalence in areas to the north and west.

SCN reproduction is favored by dry and hot growing seasons, and these above-ground symptoms are brought on more by drought stress. I expect to see more ‘visible’ SCN this year.

Please see my next article on the SCN-Sampling Program for details on how to sample and how to interpret the results.

The soybean cyst nematode (Heterodera glycines) is a parasitic worm that feeds and reproduces on soybeans, dry beans and a few weed hosts found in North Dakota. Essentially, it’s a parasite, and like any good parasite, the objective is not to ‘kill’ the host (that is somewhat counterproductive for the nematode). Rather, the nematode flourishes when it takes water and nutrients from the roots. Consequently, soybeans that are infected by SCN are difficult to detect by their above-ground symptoms. It’s not until they are experiencing yield losses of 15-30% (or more), that they may turn yellow and/or appear stunted (Figure 1). You may be able to observe the white female cysts on the roots using a hand-lens and flashlight (Figure 2). They are much smaller than a nodule, and when young appear white to cream colored. As they age, they turn brown, and are extremely difficult to see (Figure 3, next page). Consequently, soil sampling is the most effective way to find SCN, and the only way to quantify how bad your infestation is. 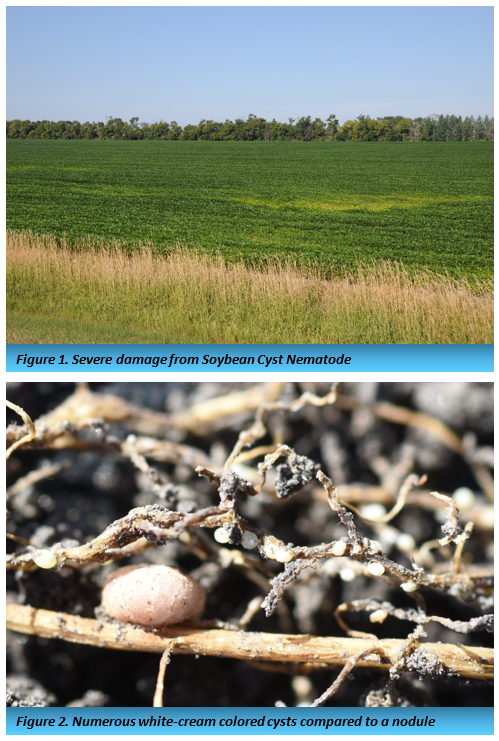 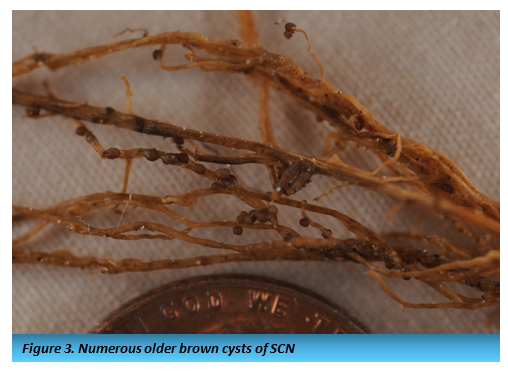