During the early morning of Friday May 28, 2021, frost occurred in many parts of North Dakota and northwestern Minnesota. Temperatures below 32 F will cause water in plant cells of susceptible crops to freeze and resultant ice crystals will kill cells by damaging cell membrane systems. How different crop species react to freezing temperatures depends on where the growing points are, and if the cells have built in anti-freeze systems to prevent ice crystal formation.

Corn plants less than 6 to 8 inches tall (five-leaf stage or less) will recover from frost because the growing point is still below the soil surface and is usually not damaged. However, in some plants the damaged tissue may constrict the emergence of a new leaf.

Cereal grains may lose some leaf tissue due to frost. New growth will occur after frost damage since the growing point is protected below ground before jointing. 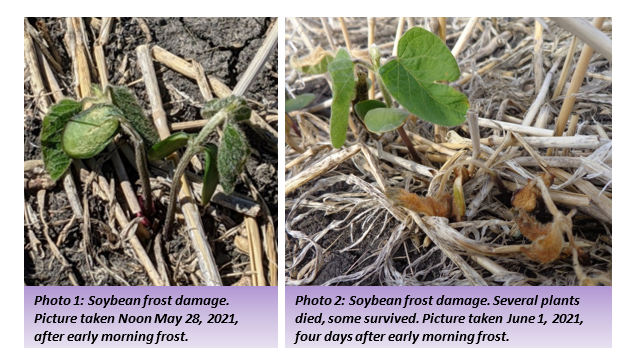 In evaluating frosted seedling fields, consider the percentage of plants killed and the percentage recovered. The surviving plants should be evenly distributed in a field. Even if many of the seedlings in a reasonable stand are frost killed, the field will usually produce more seed when left rather than if re-seeded, especially during the current drought conditions. The surviving plants will take advantage of the reduced competition for light, moisture and nutrients, and grow larger, producing more branches, pods and seeds per pod, thereby compensating for the lost plants. The remaining plants may require five to eight days longer to mature; but a re-seeded crop will require an even longer period to reach maturity.