During the summer of 2021, NDSU’s soybean breeding program tested 205 Enlist, GT27, Roundup Ready and Xtend soybean varieties, as well as 41 conventional and Liberty Link varieties, for IDC tolerance. Soybean varieties have genetic differences in how tolerant they are to IDC symptoms.

Test results are based on replicated trials conducted at a location with a history of IDC. Visual ratings were made on a 1 to 5 scale, with 1 indicating no chlorosis and 5 being the most severe chlorosis (Graph 1). Ratings were taken at three different soybean growth stages.

This summer’s tests showed significant differences among soybean varieties. For example, the average scores for the genetically modified organism (GMO) group tested ranged from 1.1 (most tolerant) to 4 (the least tolerant variety). The test results are available at https://www.ag.ndsu.edu/varietytrials/soybean.

Although we have had dry soybean growing conditions, IDC was observed in many soybean fields in eastern North Dakota and northwestern Minnesota during the 2021 crop season. Plant leaves with IDC show symptoms of yellow with green veins. Yellowing, browning and stunting of the plants during the early plant growth usually results in reduced soybean yields. 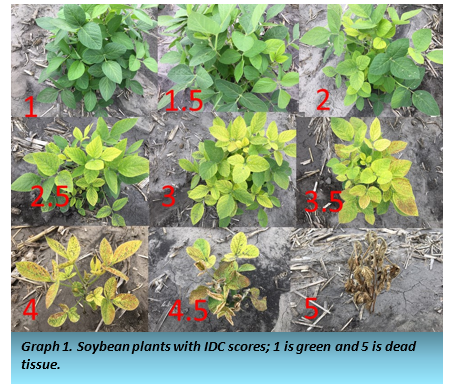