This fall there has been much more straw removal from small grain fields than normal. This means that there would be far less problems planting into stubble next spring than in most years. In addition, most straw was rather brittle and dry and the ground coverage, even the chaff, was better distributed than usual. Many growers have expressed an interest in starting to plant without tillage. Given the dry soil, the probability of a better seed bed this coming spring, and the reduced residues in many fields, there is an opportunity this winter to improve planters with residue managers and plant directly into the stubble. It takes 5-6 years to transform most soils from beaten-to-death, poorly aggregated specimens that have problems with trafficability and crusting into well-aggregated soils that support field equipment without compaction issues and start the season with excellent planting conditions.

This year would be a perfect year to make a move in that direction. A few growers outside the Valley have expressed concern with compaction (in higher illitic-clay soils) with compaction layers about the 6-8 inch depth. If a compacted layer is present, using a tool that cracks the layer compared to most chisel-plows/deep-tillage tools that lift the soil, would perform the task without the potential to unnecessarily exposing the surface to erosion or producing giant clods that have difficulty breaking down over a normal to dry winter.

There is also more interest in strip-till for row crops than usual. The reduced residue will also help the transition to a strip-till operation. The use of a shank-style strip-till tool will clear a planting width, crack the soil and enable the applicator to apply P and K in the same operation, while maintaining much of the soil biology that makes long-term no-till fertility benefits possible. A disc-type strip-till tool decreases wind erosion greatly, similar to that of the shank-style units, but it does not produce the no-till benefits over time, nor is it as simple to apply fertilizer with, because it tends to concentrate any fertilizer near the future planting depth, limiting rates.

Soybean ground will similarly have reduced residue. Plant height is reduced and residue produced this year will be less. Planting into the soybean residue next spring will be much easier than usual. The benefits of planting without tillage not only benefits the soil, but in years such as this, when moisture is limited, will result in better yields. The soybean image shows an experiment with 5-years continuous no-till in a Fargo soil (left-top, greener crop) compared to conventional tilled, wilted soybeans, (right-bottom, wilted crop). 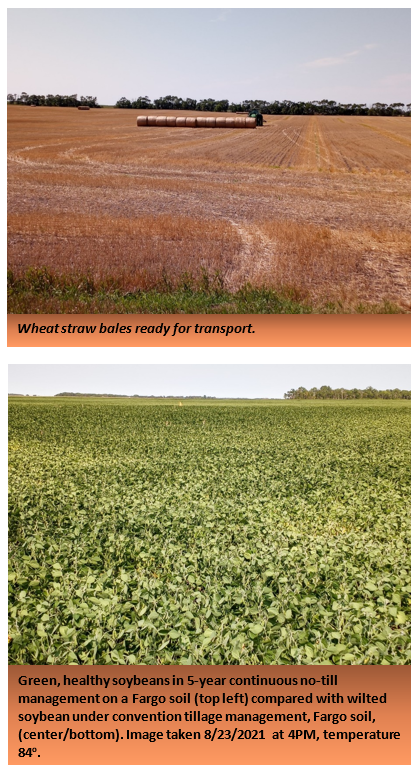