Due to the large amount of residual nitrate left after the short crops in the state, there will be more soil sampling than usual. Here are a few tips to increase the practical use of the results from sampling.

The annual 4-H/FFA Land Judging competition was held last week on Forest River Community land northwest of Inkster, ND. The competition consists of 4 practice soil pits, about 12 feet long, and about 4 feet deep that contestants can work with their teams on in the morning and 4 contest soil pits of similar dimensions in the afternoon. As one of the soil card scorers, I was particularly excited to see a buried ‘A’ horizon in one of the practice soil pits. It was located on the north side of a low ridge. I speculate that during one or a series of major dust storms about 100 years ago, the soil surface, protected from the destruction by the low ridge, was buried by particles streaming and churning by. The remaining A horizon was buried by 1 to 1.5 feet of wind-blown sediments and has retained much of its original organic matter.

I took a sample of the buried A material and had the NDSU soil testing lab analyze the organic matter. It came back at 5.9%. The soil all around it ranges from 2 to 2.5% organic matter today. But 100 years ago, this soil had organic matter at least a foot thick with at least 6% organic matter. There should be no mystery why, when weather was favorable, the 1902 soil survey of Grand Forks County stated that some fields averaged 40 bushels per acre of spring wheat (without any fertilizer). 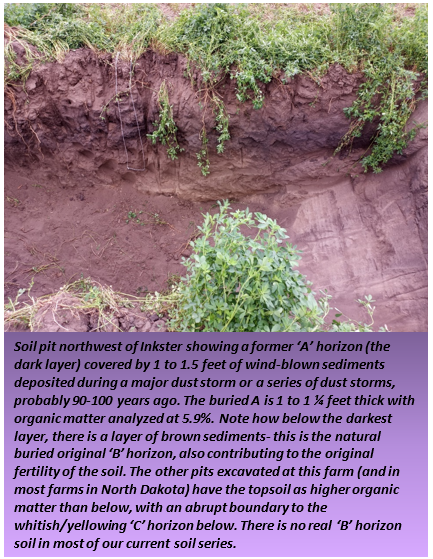