The weather conditions from fall 2020 through spring of 2021 have been a completely different situation than on the same calendar dates a year ago. The dry fall, winter, and spring conditions have led to early planting in many areas, as well as an increased concern in herbicide carryover from applications made in the spring and summer of 2020. Any discussion about herbicide carryover will focus on three key components: environmental conditions since herbicide application; chemistry of the applied herbicides; and interactions between the herbicide and soil conditions.

Our northern climate inherently places us at higher risk for carryover compared to other states to our south and east. Herbicides will break down more quickly in warm, wet soils due to increased microbial and chemical degradation. We will typically have the warm soils throughout our summer months, but soil temperatures decline rapidly as we progress into the fall and herbicide breakdown will also slow down during this time. It is important to remember that herbicide breakdown does not occur in frozen soils. What this means for us is that most herbicide degradation occurs in the summer months, and degradation is more rapid when we have adequate rainfall. Whenever we have dry conditions, herbicides can persist in the soil longer due to decreased microbial and chemical degradation. For many areas of North Dakota, the soil conditions since August or September of 2020 have certainly been dry, thus causing the concern for carryover.

In addition to increased risk of carryover due to environmental concerns, there are certain soil properties that increase the chance of injury with some herbicides. Soil pH is an important consideration for herbicide degradation. This is typically more important in the eastern part of the state, where high pH soils will reduce the breakdown of sulfonylurea and triazine herbicides. However, there is increased concern in areas of western North Dakota with pockets of low pH. Specifically, the imidazolinone herbicides (imazethapyr, imazamox) will persist for longer in low pH soils (<6.0) and will be another consideration as more areas with low soil pH are recognized.

One of the most important soil factors to consider for microbial breakdown of herbicides is the soil organic matter. In general, the higher the organic matter, the more microbial degradation will take place. There are several fields in western North Dakota with organic matter at or below 2%, and many more fields with pockets across the field with less than 2% organic matter. These soil types will also be at increased risk of carryover due to inherently less microbial activity. Fields with sandy knolls can also experience increased risk of carryover since those spots tend to be drier than the rest of the field.

Certain herbicides will also have an increased risk of persisting in the soil and causing injury in subsequent years. These are typically herbicides with a longer half-life, which is the time it takes for ½ of the chemical to degrade.

While we will use many herbicides with relatively long half-lives (such as atrazine, fomesafen, imazethapyr, and metsulfuron), perhaps the most commonly used herbicide with a long half-life is clopyralid, which is found in WideMatch, Curtail, and similar products. Clopyralid has an average half-life of 40 days, but this has ranged from 12 to 70 days across soils and environments. Clopyralid is also exclusively degraded by microbes. So in the cases where little to no rainfall occurred after application last year, there would be less microbial activity in those drier soils. There is also an increased risk of clopyralid carryover in those soils with low organic matter or sandy knolls.

Most of the questions we have received this winter on carryover have been about fields where clopyralid was applied in small grains and the plan is to rotate to field peas, soybeans, or sunflowers in 2021. These crops are all sensitive to clopyralid and have crop rotation intervals of 10.5 to 18 months, depending on product and rates used, following clopyralid applications. Since clopyralid is broken down by microbes, there are additional rainfall requirements that can decrease or increase the rotation restrictions. For instance, the WideMatch label specifically states “For rotation to field peas in 10.5 months, precipitation must be greater than 7.0 inches during the 10.5 months following application of WideMatch and greater than 5.5 inches during the June 1 through August 31 time period following application. Otherwise, rotation to field peas is recommended 18 months following application”. This label requirement is driven by the need for increased microbial breakdown that occurs in wet soils during the warm summer months. Essentially, we need most of the precipitation to occur during the summer months when we have these warmer soil temperatures.

So what does this mean for planting these sensitives crops in 2021. As with everything in agronomy, it all depends. If the rainfall requirements on the label were met, then it should be ok to plant these crops in 2021. Even though we have been dry over the last six months, most of the degradation occurred last summer, and many areas had adequate rainfall in June and July to meet label requirements, even if the spigot turned off in August. Some areas are flirting with the required rainfall requirements, and these locations will be at greater risk for carryover and crop injury if field peas, soybeans, or sunflowers are planted. One good resource to check for rainfall since application is your local NDAWN station. For example, the NDAWN station near Webster shows 5.10” of rain in June 2020, 3.54” of rain in July 2020, and 0.73” in August of 2020, for a total of 9.34” over that time period. So if clopyralid were applied on June 1st, then the rainfall requirements were met. Even though there has been very little moisture since August of 2020, the moisture was available at the best time for microbial degradation.

Keep in mind that summer rainfall events can be variable and your fields may have received more or less rainfall than the nearest NDAWN station. There are some areas of the state that did not receive the required rainfall, and planting a more tolerant crop will be the safest recourse. Between field peas, soybeans, and sunflowers, field peas will be the highest risk crop in some of these areas that barely met rainfall requirements. Soybeans and sunflowers might be ok in some situations, but keep in mind that with most herbicide carryover events, injury is more likely to occur in pockets, such as low organic matter or sandy knolls. One additional consideration is that clopyralid can also be released from degrading crop residue, so if there are piles of residue in areas of fields following some of our wind storms this spring, then injury may be observed there as well.

One final note specific to clopyralid. Many have called with questions about soil tests that report back clopyralid is present at a certain part per billion (ppb) or part per million (ppm) in the soil. I took some time to survey fellow Weed Scientists and some industry representatives, and the consensus is nobody has a clue what these numbers actually mean when it comes to risk of injury to sensitive crops. So just because we can detect clopyralid in the soil doesn’t mean we have any confidence what those numbers actually mean for risk to a sensitive crop. 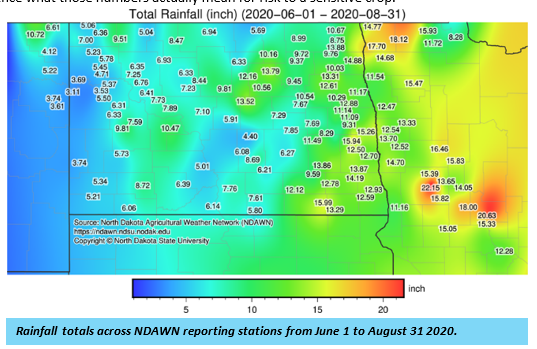