One question posed by anyone who sprayed a preemergence herbicide this spring has been “is my herbicide still there?” The thunderstorms that moved through the state last week may have answered that question for some people who are scouting fields this week. While rating trials this week, we noticed some herbicide splash damage on our soybean trials near Prosper. These trials were planted in early May, and had ~0.75 inches of precipitation from planting through last Thursday. Then on Friday morning we got a hard, pounding rain at the site (0.68”). We noted necrotic spotting on soybean and weed leaves in trials that had received a Group 14 herbicide at planting (flumioxazin or sulfentrazone). New leaves on affected crops and weeds lacked these necrotic spots.

We will typically see some Group 14 injury on broadleaf crops somewhere across the state every spring. However, it is rare for the injury to first appear in the middle of June. In the case at Prosper, the herbicide had clearly not moved too deep into the soil profile since planting. Splashing rain and dirt moved enough of the herbicide onto leaf surfaces to cause injury. This type of injury will not affect yield, but it is worth noting since necrotic spotting on leaves of V2-V3 soybeans is typically not from a herbicide applied over a month ago at planting. 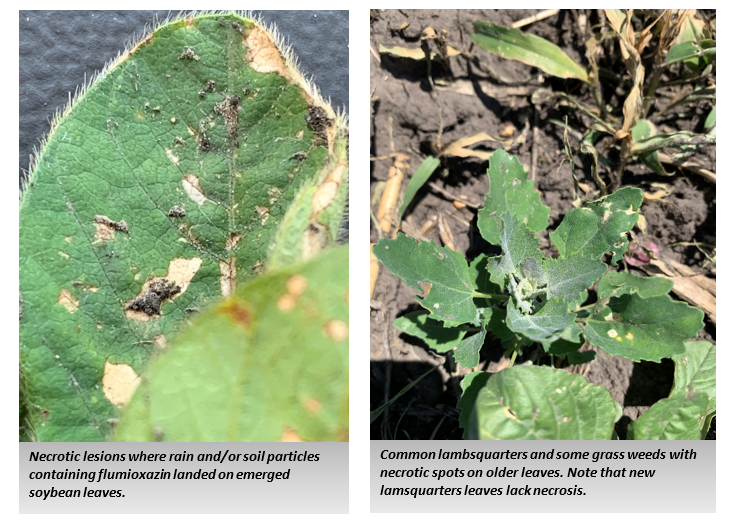