The wind erosion events in late March and early April certainly caused a lot of coffee shop and Twitter talk for a number of good reasons worth discussing. The Weed Scientist in me couldn’t help but think, how many weed seeds are moving with all that soil? Whenever we typically discuss wind-dispersed seed, we are usually talking about seed with a pappus (like dandelion of marestail), or the tumbleweeds (kochia and Russian thistle). However, the sheer amount of soil that was relocated certainly brought some weed seeds along for the ride.

I recently visited some of the research plots near campus that were victims of the wind erosion events over the last few months. We had a few areas where freshly blown Fargo clay accumulated on top of long-term perennial grass, much like many ditch banks in the region. I barely set foot out of my truck before seeing a fresh mat of summer annual seedlings. Common lambsquarters, wild buckwheat, common mallow, wild mustard, and common ragweed could all be found in a relatively small area next to the field. I have no doubt in my mind that waterhemp and some grasses will start emerging from that area soon. The bottom line is that these erosion events have also moved a tremendous amount of weed seed around. Keep this in mind as fields get scouted for weeds later this spring and summer. Just because you may have never had a weed like waterhemp in your field before, this doesn’t mean you haven’t acquired a new weed problem from the soil that blew in. 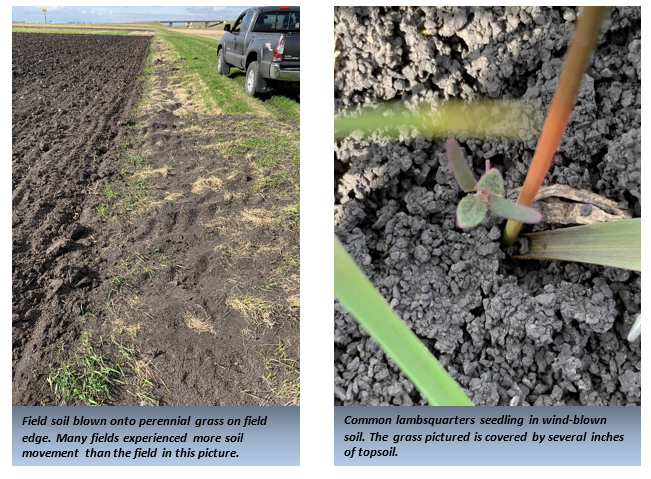