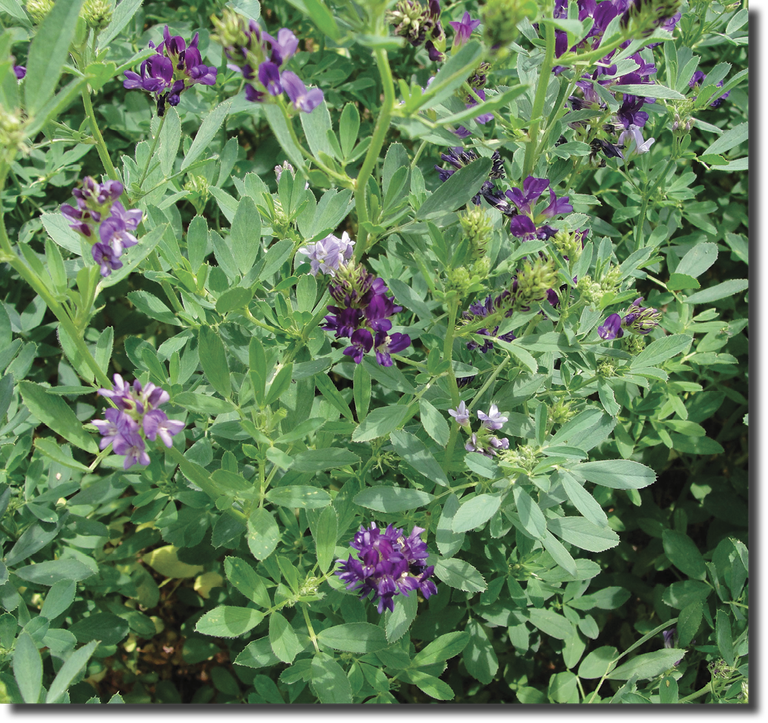 Alfalfa (Medicago sativa) is the only forage crop that was domesticated before recorded history (Brough et al., 1977; Small, 2011). Alfalfa originated in western Asia in the area now known as Iran in about 8,000 B.C., and its domestication closely followed the domestication of the horse.

The word “alfalfa” comes from Arabic meaning “horse fodder.” Alfalfa spread to China first, probably traveling east with the nomadic tribes of the Asian Steppe, not reaching Europe through Rome until 200 B.C.

Alfalfa was introduced to North America in about 1790, and now it is common throughout the U.S. as the result of deliberate cultivation and as a weed. It was introduced into North Dakota in about 1890. In 2016, 1.5 million acres of alfalfa hay were harvested, representing about 5 percent of the nation’s annual alfalfa hay acreage. The hay had a value of about $190 million (U.S. Department of Agriculture-National Agricultural Statistics Service) in North Dakota.

Relative feed value (RFV) is an index developed to compare and evaluate forages based on their usefulness to ruminant livestock, such as beef and dairy cattle. Alfalfa has the greatest potential RFV of any major forage source (Table 1). 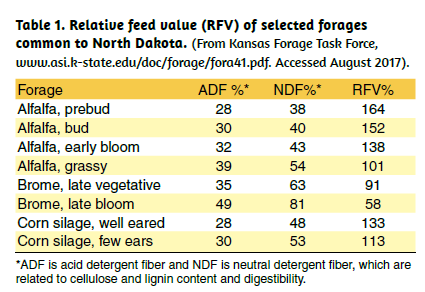 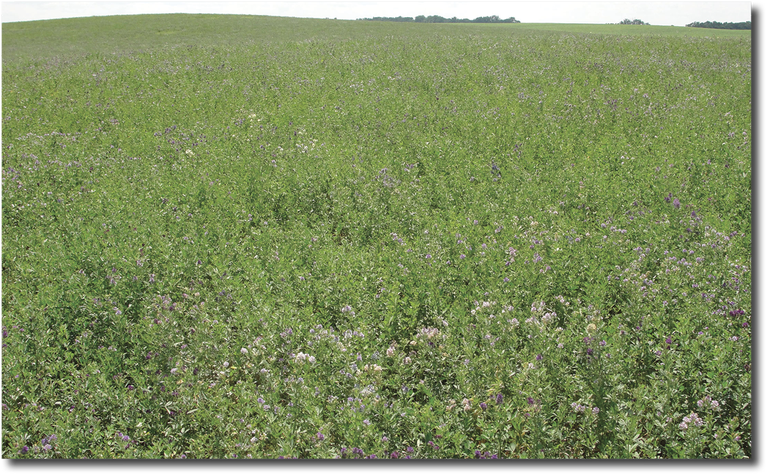 Alfalfa hay removal results in removal of minerals from the soil. As a perennial plant, the mineral composition of alfalfa’s above-ground plant parts depends on maturity. Table 2 shows the average of mineral percentages at late bud stage of alfalfa. All mineral elements are essential, but nitrogen (N), potassium (K) and calcium (Ca) are the three nutrients taken up in greatest amount.

Alfalfa production is influenced by several soil factors in North Dakota: soil pH, nitrogen (N) supplied by symbiotic N-fixing bacteria, phosphorus (P), potassium (K), sulfur (S) and the presence of excessive soluble salts. These factors will be discussed in detail in this publication.

The soil pH required for maximum alfalfa production is about 6.7 (McClean and Brown, 1984). The average soil pH in North Dakota is about 7; however, pH varies in the state from about 4 to slightly more than 8. Fields have been found that vary from 4.7 to 7.8 within a 40-acre boundary, so soil testing, preferably by zone, is strongly recommended.

One of the consequences of low surface soil pH is lower nitrogen fixation rates of Rhizobia bacteria and surface pH, as well as subsurface pH, which should be near or above pH 6.7. To increase soil pH, an amendment needs to be applied to the soil to neutralize acidity.

Some municipal water treatment plants also use finely ground limestone to facilitate sedimentation of solid contaminants and may offer this limestone slurry for land application.

Generally, a loam soil with 3 percent organic matter would require about 2 tons per acre of 100 percent calcium carbonate-equivalent liming material to increase the pH about 0.5 unit.

Alfalfa can be supplied all of its nitrogen (N) requirements through inoculating the seed with the proper Rhizobium bacteria. The strain necessary for alfalfa is Rhizobium meliloti. It also is the strain required for sweetclover. Soybean, field pea, chickpea, dry edible bean, clovers and lentil inoculum will not be effective on alfalfa.

The inoculant must adhere to the seed and stay on the seed until it enters the soil. Some seed suppliers preinoculate alfalfa seed. However, storage at the incorrect temperature or an extended delay between treatment and planting may reduce the effectiveness of the inoculation bacteria. Thus, many growers prefer to inoculate their seed immediately before planting.

Check the expiration date of the inoculant to be sure that the bacteria still is viable. Heat and direct sunlight kill the bacteria even in the bag, so storage in a cool, dark area will result in best performance until it is needed.

A small cement mixer can mix seed with the proper amount of inoculant for larger jobs. To enhance adhesion of inoculant to the seed, the farmer may use a sticking agent such as milk, or water that contains sugar, molasses or gum arabic.

Only a small amount of liquid should be added to the seed to prevent the seed from getting too wet and having flow problems through the planter. Planting should occur within 24 hours of inoculation.

Nitrogen fertilizer application to alfalfa can result in nitrate accumulation within the forage, making it toxic to livestock. For further information, see the NDSU publication “Nitrate Poisoning of Livestock”.

Phosphorus (P) nutrition is essential for highest yield in an environment. Adequate P maximizes hay and forage yield in high- and low-yielding environments. Ideally, soil test P levels should be greater than 15 parts per million (ppm) prior to alfalfa seeding; however, P levels this high are not common in North Dakota. Growers are encouraged to apply at least 200 pounds per acre of 11-52-0 prior to seeding.

Phosphorus rate studies in North Dakota, the region and many parts of the world have shown that subsequent P application is essential to maintain yield and stand through the years. The most effective timing of annual P application is after first cutting.

An explanation for this is that in early spring, P is released from organic sources and utilized to produce the first cutting, reducing the need for early spring P application. However, during the second cutting growth, release of soil P is low, so supplemental P fertilization is required. Surface application results in efficient P uptake by alfalfa.

Applying P through a subsurface knifed application after alfalfa establishment isn’t needed. A rate of 40 to 50 pounds per acre of P2O5 as 11-52-0 or another water-soluble P fertilizer is sufficient to maintain yield and stand, as an annual application, regardless of yields achieved.

Alfalfa is a high user of potassium (K). The application of K should be related to soil test level, clay chemistry and alfalfa tonnage removed the previous season. Initial K level should dictate pre-seeding K application.

The soil cation exchange capacity (CEC) also will be useful to determine the initial K application rate that the soil would support. Unfortunately, the CEC test utilized by most soil testing labs in the region will overestimate CEC due to the influence of free Ca/magnesium (Mg) carbonates that will be solubilized during the testing procedure and the presence of soluble salts that will be in the testing solution from most of our soils.

The following table contains estimates of CEC from contribution of our dominant clay chemistries and organic matter to CEC in North Dakota. 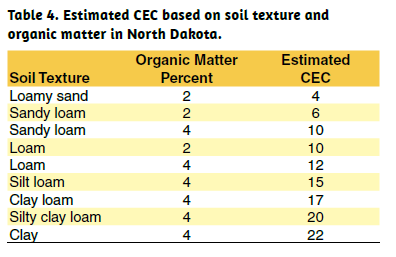 With soil having CEC less than 10, increasing the soil test K level (dry-based soil test K, 1-M ammonium acetate extraction) to more than 100 ppm will not be possible. 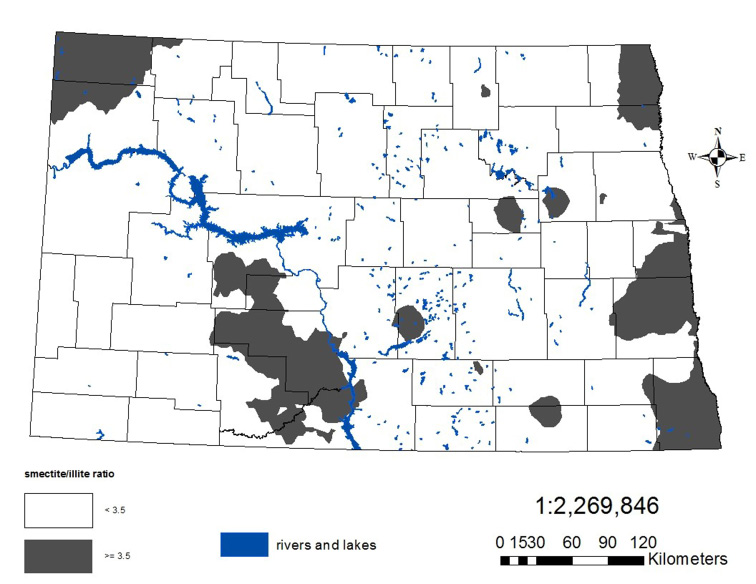 If the soil test K level is at or below the critical level, then supplemental K application will be important to maintain stand and high yield for a given environment. Early spring K release from soil minerals will sustain the alfalfa crop through the first harvest, but after the first harvest, K application based on removal by the previous year’s yields will be essential to maintaining stand and productivity.

One ton of alfalfa removes about 50 pounds K2O per acre. Therefore, the calculation to guide K application after establishment is:

Alfalfa takes up potassium in concentrations greater than the physiological requirements for K if soil K availability is high. Excessive K in forage can be detrimental to livestock. Forage testing is the most effective method to ensure animal nutrient requirements are being met and not exceeded in a feeding program. Laboratory analysis is the recommend method to determine forage nutrient content and forage value. 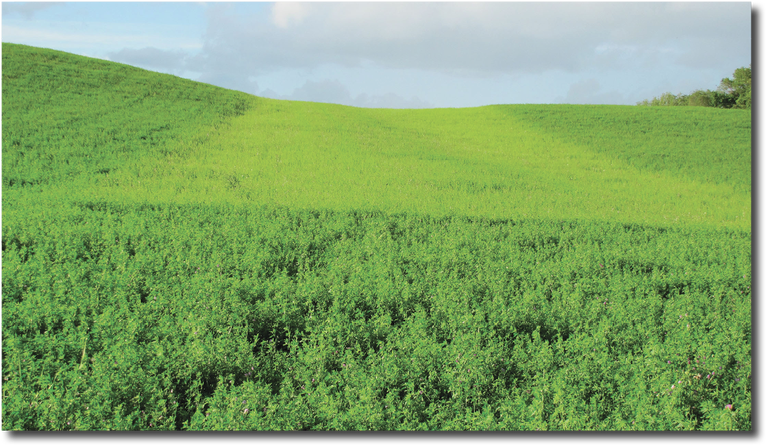 Sulfur deficiency will appear in fields first on coarser-textured, higher landscape positions, particularly following periods of high spring rainfall. Deficiency symptoms will appear as yellowing near the growing point of plants, with green leaves below.

An application of granular gypsum (calcium sulfate), ammonium sulfate, potassium-magnesium sulfate or related materials will alleviate the problem. Phosphate sources with sulfate-S imbedded in the granules also will aid in alleviating and preventing deficiencies of S.

Alfalfa can be susceptible to boron (B) deficiency on low organic-matter sandy soils. Deficiencies appear as stunted plants with brown discoloring between leaf veins (Figure 3). No evidence is available to date of B deficiency in North Dakota, although a statewide soil sampling 10 years ago showed very low soil B levels in western North Dakota, with higher B levels only common in the Red River Valley. 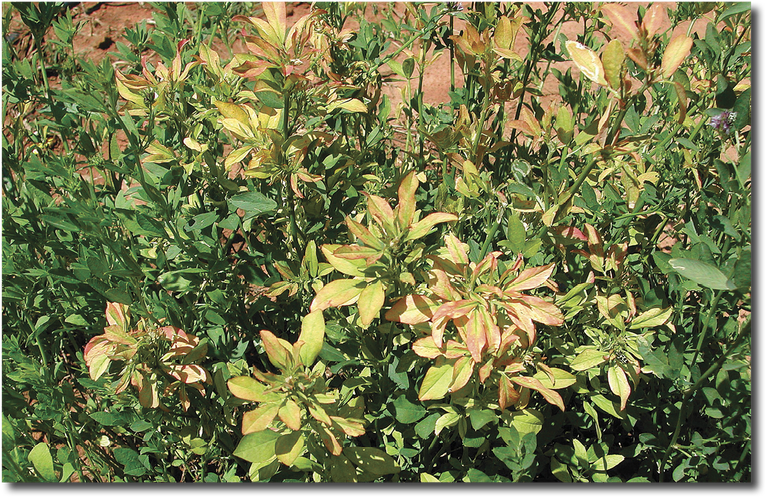 A soil test B level of 1 ppm (hot water extraction method) is considered the critical level for alfalfa in Wisconsin and Minnesota. Boron deficiency is more common in Minnesota on low organic-matter, sandy soils in the west-central part of the state.

If B was used as a fertilizer, application of no more than 1 pound per acre of B annually should be applied. More reports have been made of B toxicity due to overapplication than of deficiency in the region.

No reports have been made in North Dakota of zinc, manganese, copper, iron, chloride, nickel or cobalt deficiencies.

Alfalfa is classified as a moderately susceptible crop in terms of salinity, with the ability to maintain near-maximum yield at EC (electrical conductivity - the laboratory result of salinity analysis) of 1.4 millimhos per centimeter (mmhos/cm). Alfalfa is most susceptible to stand loss at seeding to early seedling development.

For this reason, planting early in the spring after snowmelt will minimize the salinity encountered because soluble salts will leach a few inches or more downward into the soil before the evaporative pull of warmer temperatures and lower humidity increases EC at the soil surface later in the season. Once alfalfa is established, its tolerance to salinity is much greater.

Because alfalfa growth utilizes more water during a growing season than most crop choices, and because of its deep rooting characteristics, alfalfa can be used as a living drainage tool to prevent saline areas from developing or increasing in size. If managed properly, alfalfa production may decrease the areas affected by salinity for subsequent crops.

A 30-foot strip of alfalfa seeded next to a road ditch has the ability to utilize water at such a depth that water from the ditch is intercepted before it reaches the interior of the field, reducing salinity in the field through water table depth management.

When alfalfa is seeded above a saline seep, again, the alfalfa can intercept groundwater before it reaches the seep, resulting in salinity abatement in the seep. If alfalfa is seeded around a large within-field saline area, groundwater that is contributing to the presence and expansion of the within-field saline area will be reduced, and the size of the area affected by salinity may be reduced.

As the saline-affected area shrinks, alfalfa can be seeded in the newly reclaimed soil, further shrinking the affected area. Fields where salinity develops at a field scale may benefit from alfalfa production for two to three years, followed by one to three years of annual cropping and then alfalfa again.

Effective production of organic alfalfa would benefit greatly from an integrated organic livestock farming system. Application of composted manure on the alfalfa after first cutting at a rate dictated by manure analysis to provide the recommended P and K would result in stand longevity and health.

Fresh manure, or piled but not composted manure, would contain high levels of nitrogen, which may result in the reduction of alfalfa stands due to selection for grasses in the sward. Application of excess N may result in the accumulation of nitrates in the forage, which can be toxic to livestock, so manure analysis and reasonable manure application rates are important based on analysis. Also, manure or compost should not be applied at rates that would cover and smother the alfalfa crowns.

Alternative P and K sources for organic alfalfa production are limited if manure is not included in the system. An additional P source would be bone meal. The source of K with the most immediately available K benefit would be sulfate of potassium magnesia.