We evaluated alfalfa seeding rate effects on forage yield at Fargo from 2000 to 2005. Pioneer variety 53Q60 was used and seeded broadcast at 1, 2, 4, 6, 8, 10, 12, 16, and 32 lb/A. The seed was incorporated by one pass of a double-ganged Brillion packer. Forage was harvested twice during the seeding year and weeds were controlled well with a single application of Pursuit at 3 fl oz/A. Forage was harvested four times during the last four years at very early bud, late bud, 30% bloom, and 50% bloom or regrowth well initiated. 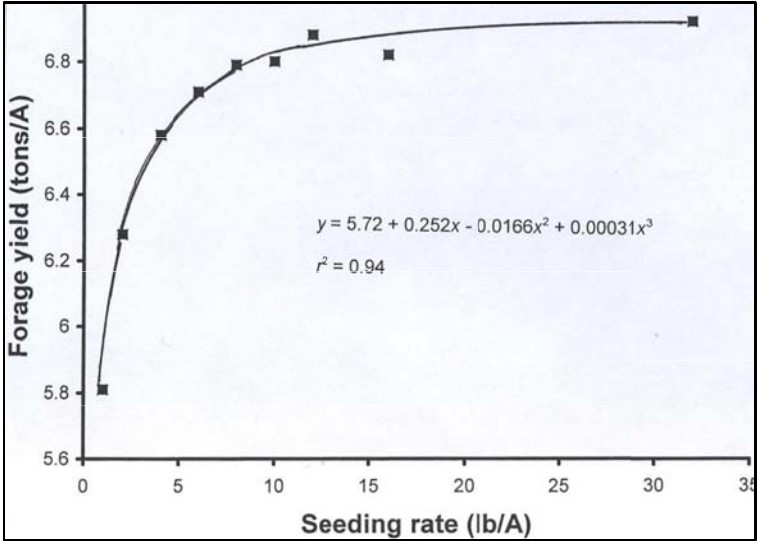 Forage quality was not taken on these experiments, but forage quality was taken on another experiment that had been established at 1, 2, 3, 4, 5, and 9 plants/ft2 and at 8 and 20-lb/A seeding rates, which established 33 and 43 plants/ft2. Crude protein, acid detergent fiber, and in vitro digestible dry matter were unaffected by seeding rate in the first and third harvest years. One pound per acre seeding rate will establish about 4 plants/ft2 so there is no reason to use high seeding rates to “get finer stems”, which is a common pitch by seed salesmen. If you establish about 20 seedlings/ft2, there are adequate plants for yield and quality. Besides, a single plant given a year to establish well can have 50 plus stems/plant, which approaches the stem density for maximum yield per acre. These data suggest that seeding rate has little to do with forage quality. Forage quality is primarily affected by height and maturity of the plant (and other factors such as leaf loss, rain damage, grass infestation, etc.), not seeding rate.

I would recommend seeding Roundup Ready alfalfa at 8 lb/A to allow a small cushion on the seeding rate for poor germination conditions and less than ideal soil preparation. Some have argued that seeding rates should be increased for broadcast compared with drilled stands. Our data does not support this! Put your time and effort into preparing good seedbeds, ones that are very firm, and do a good job of seeding. Don’t throw good money done the drain by increasing the seeding rate, especially with the high seed cost of Roundup Ready alfalfa. You may have a greater weed problem because of the lower seeding rate, but this should be a minor problem with the excellent weed control that is available with Roundup Ready alfalfa.

Third, Roundup Ready alfalfa will probably increase the length of time producers keep their stands in production. Roundup will be used to control invading species such as dandelions, perennial grasses like quackgrass and bromegrass, and annual grass species like green and yellow foxtail. This will make the fields look much better from the road and may conserve a little additional soil water for alfalfa production, but I believe increased stand life will be a negative on forage production. When dandelions infest, the alfalfa stand is weakening and is less competitive. In the past, dandelion infestation was a good indicator of when to consider discontinuing the stand. With Roundup application, we will no longer have this instructive tool. 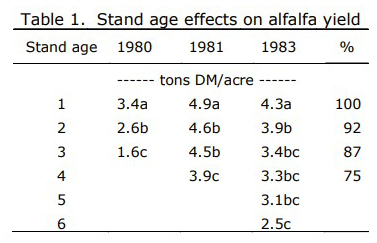 Forage yield of high-producing alfalfa stands decreases with stand age (Table 1). This experiment seeded starting in 1977 and seeded for seven consecutive years shows the value of keeping stands young in dry years like 1980. Forage yield was 1.8 tons/A less on a 3-year-old stand than on a 1-year-old stand. With average rainfall in 1981 and 1983 forage yields decrease 1 ton/A from a 1- to 4-year-old stand, about 25%. 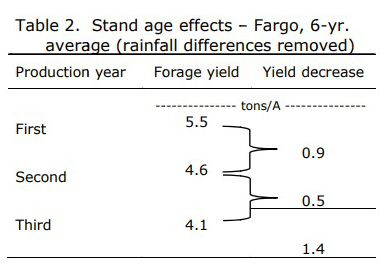 Forage yield decreases with stand age even when above-normal rainfall occurs (Table 2), but at a lesser rate. Average forage yield has been about 1.4 ton/A less on a 3-year-old stand vs. a 1-year-old stand at Fargo over a 6-year period when rainfall averaged nearly 7 inches above normal. 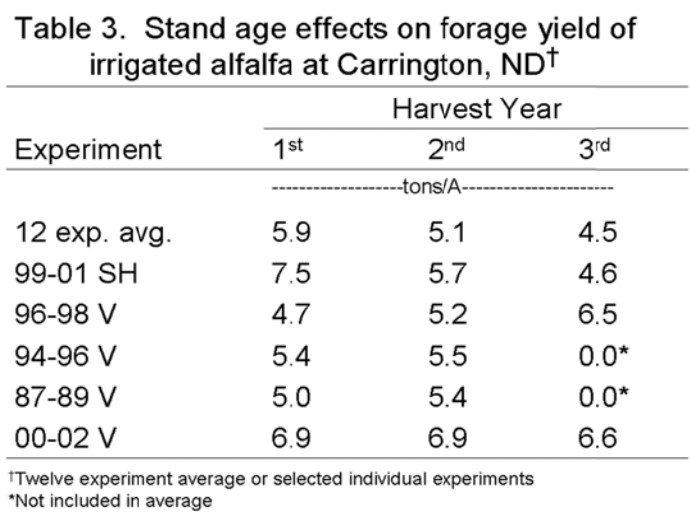 Forage yields of irrigated alfalfa stands seem to decrease even faster than dryland stands as the stand ages (Table 3). Forage yields were 1.4 tons/acre less on a 3- vs. 1-year-old stand as a 12-experiment average. However, note how variable the data are! The variety trial in 1996 to 1998 increased in forage yield as the stand aged, was the same with stand age in 2000 to 2002, and dropped 2.9 tons/acre with stand age during 1999 to 2001. Since irrigation supplies the water that is needed by the alfalfa crop when rainfall is inadequate, other factors cause most of the yield reduction. Light winter injury may explain some of the loss with complete stand loss from winter kill occurring in the 1987 to 1989 and 1994 to 1996 experiments. Some of the loss yield is due to buildup of disease, such as Fusarium root and crown rot, and a general decline in the vigor of the plants.

These data suggest that to maintain maximum productivity of alfalfa, the stands must be kept young and that new stands should be established after the third to fourth productivity year. Remember, the 1 ton/A greater yield of a n ew stand will nearly pay for the establishment of the new stand, even with high-priced Roundup Ready seed.