Others who contributed to research for this publication:

Narrower row spacings and higher plant populations are trending in dry bean production. Data from a 2018 dry bean grower survey (Knodel et al. 2019) indicate 39% of black and 44% of navy bean were planted in North Dakota at rates of 110,000 seeds per acre or greater, with the likely goal of establishing at least 100,000 plants per acre. In addition, the survey results record about 70% of black and navy bean in 2018 were planted in row widths ranging from 11 to 25 inches.

General: The dryland trials were conducted using conventional-tillage systems on Heimdal-Emrick loam soil at Carrington, Fairdale silt loam soil at Park River and KindredBearden fine-silty loam soil at Prosper. Dry bean was planted generally during the last half of May. Plant populations were measured two to four weeks after planting at Carrington and prior to harvest at Park River and Prosper. After seed maturity, plants were handpulled and threshed with a plot combine during the first half of September. Best management practices were used for dry bean production.

Black bean seed yield was not statistically different with the two-factor (row spacing by population) interaction. Averaged across four years and plant populations at Carrington, black bean yield was statistically similar among row spacings (Figure 1). Plant emergence, flowering and physiological maturity dates generally were similar with row spacing each year of the study (data not shown). Canopy closure visually evaluated during late July to early August and averaged over three years was 85%, 76% and 64% with 14-, 21- and 28-inch rows, respectively. Test weight and seed size generally were similar among row spacings (data not shown). 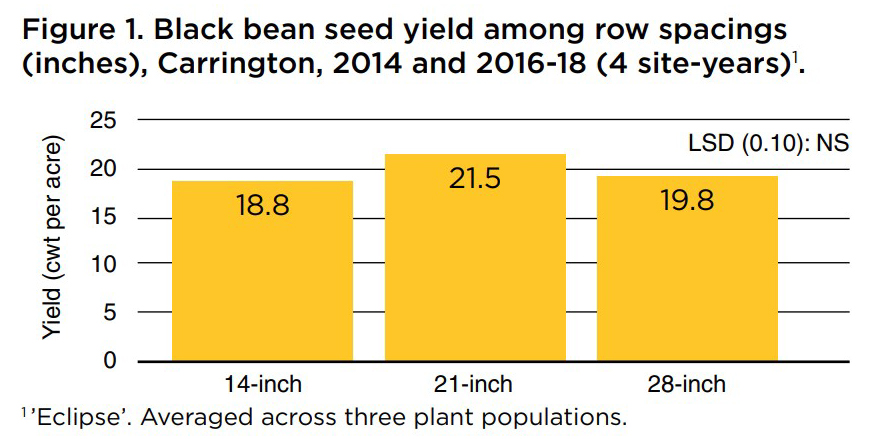 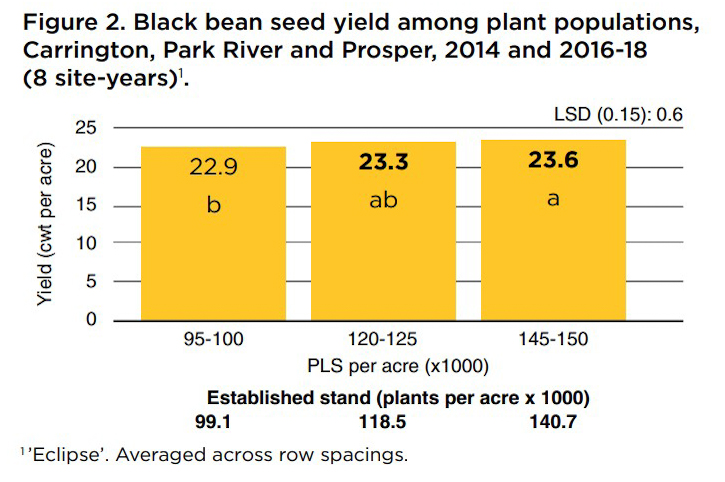 Navy bean seed yield, averaged across three site-years at Carrington, was statistically different with the two-factor interaction (Table 1). Averaged across three years and rows, plant population was 92,600, 116,800 and 139,800 plants per acre with the low to high planting rates, respectively. Highest yield was achieved at 2,660 and 2,790 lb. per acre with narrow (14-inch) rows plus the medium and high plant populations, respectively. With the range of increased plant populations in this study to maximize yield, targeted populations would need to be determined based on seed costs and market price.

NDSU Extension does not endorse commercial products or companies even though reference may be made to tradenames, trademarks or service names.

NDSU encourages you to use and share this content, but please do so under the conditions of our Creative Commons license. You may copy, distribute, transmit and adapt this work as long as you give full attribution, don’t use the work for commercial purposes and share your resulting work similarly. For more information, visit www.ag.ndsu.edu/agcomm/creative-commons.

For more information on this and other topics, see www.ag.ndsu.edu