This publication provides the latest recommendations of fertilization for field pea, lentil and chickpea according to the most recent research data. 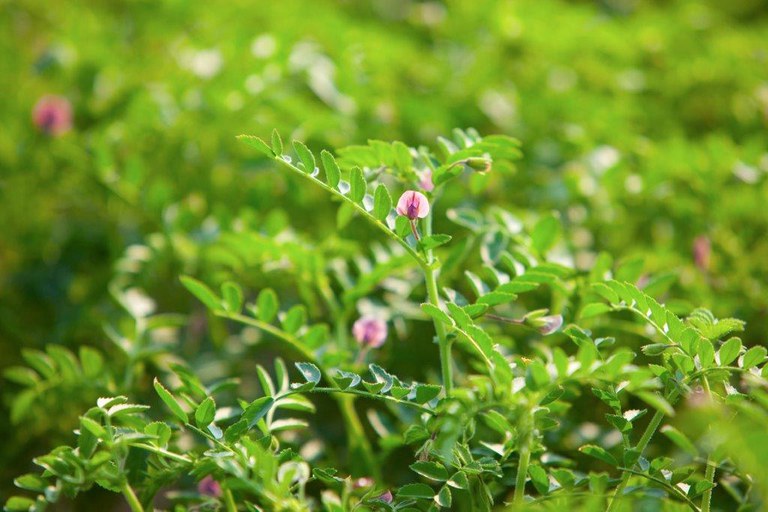 Reviewing the genetic heritage of crops sometimes helps explain some of the unique characteristics of crops. For example, corn originated in Central America, relatively close to the equator in a warm year-round environment, so day length means little to its production, whereas heat units are very important.

In contrast, soybean originated in China and the Far East in a temperate climate similar to that of the U.S. Cornbelt, so day length is important, but heat units are not very important to its maturity.

Field pea has one of the oldest origins in a form similar to its present state. Residues of field pea were found on teeth of Neanderthal skeletons dating from about 44,000 years ago in northwestern Iraq. Field pea was domesticated about 8000 B.C., and dissemination throughout Europe concluded in Scandinavia in about 1700 B.C.

Lentil is native to the Middle East and was cultivated in the Mediterranean region about 7500 B.C. Chickpea originated in what is now southeastern Turkey and Syria and was domesticated about 9000 B.C.

These crops have been an important part of human diets for thousands of years. Today, field pea, lentil and chickpea serve as important protein sources for people around the world, particularly in Mediterranean, Middle Eastern and Asian subcontinental diets.

A common requirement for efficient production of field pea, lentil and chickpea is inoculation with specific nitrogen (N)-fixing bacteria. Field pea and lentil should be inoculated with Rhizobium leguminosarum, designated a Class C inoculant by inoculation providers. Chickpea requires an inoculant with the bacteria Mesorhizobium cicer.

Inoculants usually are available as a granulated product, applied similarly to an in-furrow fertilizer application, but at a much lower rate; a liquid product, which is best applied to the seed and mixed; and a powder, which requires a sticking agent and is mixed with the seed similar to what is required for the liquid products.

Inoculants are live bacteria, so they need to be handled and stored correctly. Avoid extreme heat or cold; storing them in a cool, dark environment until needed is best. Seeding experts also recommend you do not pretreat seed and store it for more than one day.

Studies that have examined the value of inoculants to legume grain crops indicate that from 50 to 90 percent of the N used by the crop during a season comes from N-fixation by the symbiotic N-fixing bacteria. Most studies that have examined N fertilization of lentil, chickpea and field pea found no value, and sometimes a yield reduction, from adding more than 10 pounds of N/acre to these legumes.

Also, avoiding cultivation of these legumes on soils with more than 60 pounds of N/acre residual N to the 2-foot depth resulted in lower yield than in soil with lower residual N.

In a lower-yielding environment caused usually by too much water or not enough, nutrients are not as efficiently taken up, so rates relative to final yield are higher. In a high-yielding environment caused by close to ideal soil moisture and seasonal temperature, the efficiency of nutrient uptake is much higher, as is the release of nutrients from the soil and previous residues. Therefore, the rates indicated on tables are not related to yield goal, but they are appropriate for all yield environments.

Field pea can reach maximum yield potential with soil pH from 5.5 to more than 7. Zone sampling fields may indicate areas within fields where soil pH should be increased using a form of finely ground limestone. The most common local source would be sugar beet waste lime, available from sugar beet processors in Sydney, Mont., or the factories along the Red River Valley. South Dakota has four limestone quarries, and Minnesota and Montana have several. Field pea production is concentrated in North Dakota counties that include large acreages of acidic soils along the Missouri River and through Minot, and north through Mohall.

Inoculate with Rhizobium leguminosarum bacteria. In the rare circumstance that soil residual N is less than 15 pounds/acre to the 2-foot depth, the addition of 15 pounds of N/acre might be helpful for early growth. The phosphate source can provide this easily.

Although low rates of seed-placed starter sometimes may increase field pea yield when soil test P levels are low, it also consistently reduces field pea stand. A broadcast P application, and even a midrow band P application, will result in greater yield most of the time. Recommended P2O5 rates based on soil test values are presented in Table 1.

The use of a fungal “P-enhancement” product containing Penicillim bilaiae would be useful only when soil pH is greater than 7 and the soil has significant carbonates. The maximum P released by this amendment would be about 10 pounds of P2O5 per acre during the entire season. The products would have no P benefit if the soil pH were less than 7.

Field pea is not responsive to soil K except when it is extremely low. A 100 parts per million (ppm) K soil test level is adequate for high field pea production.

Lentil reaches its maximum yield potential with soil pH greater than 7. Zone sampling fields may indicate areas within fields where soil pH should be increased using a form of finely ground limestone. The most common local source would be sugar beet waste lime, available from sugar beet processors in Sydney, Mont., or the factories along the Red River Valley. South Dakota has four limestone quarries, and Minnesota and Montana have several. Field pea production is concentrated in North Dakota counties that include large acreages of acidic soils along the Missouri River and through Minot, and north through Mohall.

Although low rates of seed-placed starter have increased lentil yield when soil test P levels are low, it also consistently reduces lentil stand. A broadcast P application, and even a midrow band P application, will result in greater yield most of the time. Recommended P2O5 rates based on soil test values are presented in Table 1.

Lentil is not responsive to soil K except when it is extremely low. A 100 ppm K soil test level is adequate for high lentil production (Table 1).

Chickpea can achieve its yield potential on a wide range of soil pH from 5.3 to more than 7. Even at acid pH, yields might be maintained if a granular inoculant was used instead of a liquid or powder formulation. One problem with soil pH is the activity of the symbiotic bacteria, but the use of the granular inoculant solved that problem in a study that specifically looked at this issue.

Inoculate with Mesorhizobium cicer. A small amount of starter N increased early vegetative growth in one study and led to a slightly earlier maturity. You have little reason to apply more than 10 pounds of N/acre, usually contained in the P fertilizer source, to chickpea.

Desi-type chickpea have a lower demand for P, compared with the Kabuli types. Kabuli chickpea growers often receive a premium for larger seed size, which is a consequence of greater P rates. Also, a small amount of P (about 10 pounds of P2O5/acre) resulted in greater height of lowest pods due to increased early vegetative growth, which might be of benefit if the field has exposed rocks. Under all but the driest of soil environments, chickpea is relatively tolerant to up to 20 pounds of P2O5/acre.

Chickpea has a similar low demand for K as lentil and field pea. 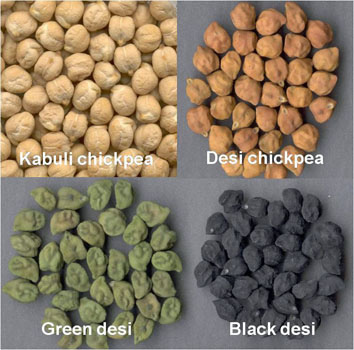 Soil testing for soil sulfur is not diagnostic. In the past 20 years, our soils have become increasingly deficient in sulfur, except for our saline soil areas. Although field pea, lentil and chickpea have the ability to support production of their own N nutrition through their relationship with N-fixing bacteria when inoculated, they have no means to support the production of S. Application of 15 to 20 pounds of S/acre as ammonium sulfate or another sulfate-containing fertilizer would supply enough S for a growing season, provided a heavy rain did not result in S leaching on sandy-textured soils.

No evidence indicates any micronutrient deficiency in field pea, lentil and chickpea in North Dakota.

Field pea and lentil are generally more sensitive to soil salts than chickpea. Avoiding seriously saline soils (electrical conductivity [EC] greater than 1.5 millimhos/centimeter) would be prudent for these crops. Great variation in salt tolerance occurs among chickpea varieties. Generally, Desi types are more tolerant to salts than the Kabuli types. However, great variation occurs, even among varieties within type. More screening needs to be conductive to provide better grower guidance. For now, note soil test salt (EC) levels in areas that struggle to produce grain and plan to seed a more tolerant crop there in the future for greater farm income. A comprehensive strategy to address salinity issues within fields also would help extend the field choices for successful legume production. For more information, visit the NDSU Soil Health website: www.ndsu.edu/soilhealth/.

Soil fertility is probably one of the minor management considerations for organic production of field pea, lentil and chickpea. Compost/composted manure would be an excellent source of P, K and other nutrients for production of these pulse crops. The restriction would be to apply these the year prior to pulse production, so that too much N is not released during the early pulse growing season. Lacking access to compost/composted manure, buckwheat grown the year before and used as a green manure prior to seed set can make some P available to the pulse crops.

Evidence also indicates that chickpea may have a similar ability to mobilize low-available Ca-held P, as does buckwheat. In a high-pH soil in India, an application of about 150 pounds/acre of finely ground rock phosphate resulted in a chickpea yield increase. Normally, rock phosphate does not release P in alkaline pH, but in this study, P was released under chickpea production. Weed control and control of pests in general will be major considerations for organic pulse production in North Dakota.