Root rots are an important yield-limiting factor in lentil and pea production. The primary causal agents of root rot of peas and lentils are the fungal pathogens Rhizoctonia solani and Fusarium species and the fungal-like water mold pathogens Aphanomyces euteiches and Pythium species.

Fusarium species are most frequently identified as causal agents of root rot of peas and lentils in North Dakota. Aphanomyces root rot has been identified in up to 50% of North Dakota pea and lentil fields on a yearly basis and is the most destructive of the root rots when the environment is conducive.

Rhizoctonia and Pythium root rot typically are found at low frequency in pea and lentil fields in North Dakota but can be yield-limiting pathogens. Proactive management of root rots are important to maximize production of these important crops in our region.

Initial symptoms caused by each root-rotting pathogen are distinct, but because multiple pathogens often infect individual plants concurrently, accurately identifying the causal agents based on symptoms can be difficult. As the plant infection progresses, disease lesions (damaged areas of plant tissue) coalesce and opportunistic microbes invade, which can alter visual symptoms. 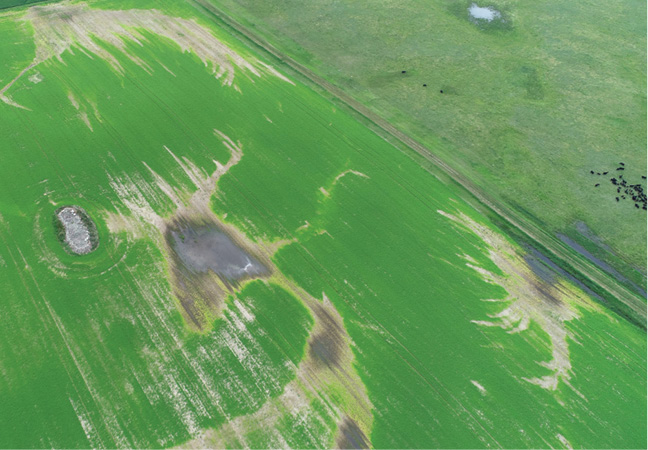 Figure 1. Symptoms associated with low-lying and water-logged areas in a producer field.

Initial symptoms of Fusarium root rot include reddish-brown lesions on the hypocotyl (the stem adjacent to the seed piece) and the tap root, as well as red discoloration of the vascular tissue (innermost portion if the stem) (Figure 2a-c). Stem lesions enlarge and eventually turn dark brown to black. In severe infections, lesions may extend up the epicotyl, become visible above the soil surface and girdle the stem.

Fine lateral roots typically will be destroyed and sloughed off or rotted, but the tap root and epicotyl may remain intact, although necrotic. Surviving plants may generate new lateral roots above the initial infection site.

Fusarium root rot alone typically does not kill the plant, but yield may be reduced. Leaf yellowing, wilting and stunting are associated with reduced nutrient and water uptake by the roots (Figure 2d). Fusarium species are
capable of surviving as mycelium in soil or crop debris. Some species form resting spores, which remain viable for as long as six years. 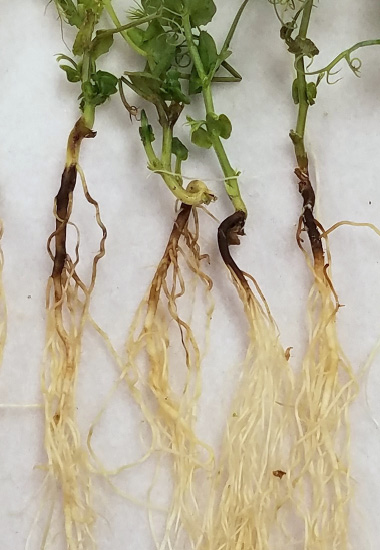 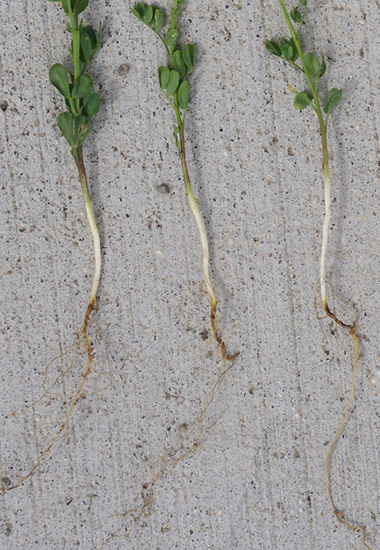 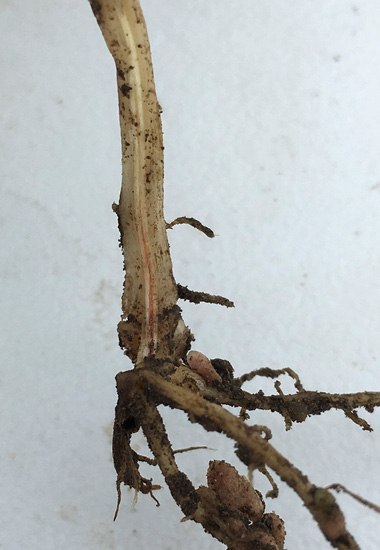 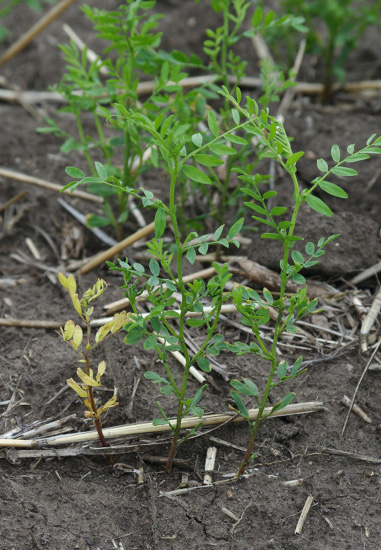 Rhizoctonia solani causes seed decay, damping off and seedling blight in a broad range of crops. Rhizoctonia solani is further divided into anastomosis groups (AG), which are semi-specific to crops. Several AGs have been reported to infect peas; however, AG 4 is the most important. Chickpeas, dry beans, soybeans and wheat also are susceptible to AG 4. Lentils are susceptible to AG 8, as are chickpeas.

Ideal soil temperatures for infection range from 65 to 85 F, and moderate to high soil moisture conditions are conducive to disease. Early season symptoms include seed decay and reddish-brown lesions on the seedling epicotyl and hypocotyl (Figure 3a).

Young plant roots frequently are infected at the distal tip first, resulting in characteristic tip rot symptoms (Figure 3b). While damping off (plant death) may occur at this point, some plants may recover from early infection.

Later season symptoms may be difficult to distinguish from Fusarium and include reddish-brown lesions on the below-ground portions of the plant, stem girdling, leaf yellowing and wilting.

Rhizoctonia solani survives in the soil or crop debris and may persist for several years. 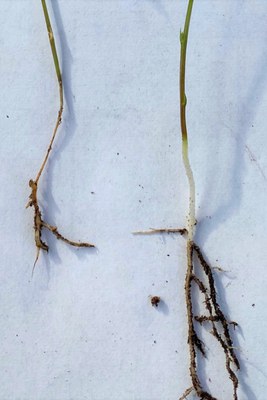 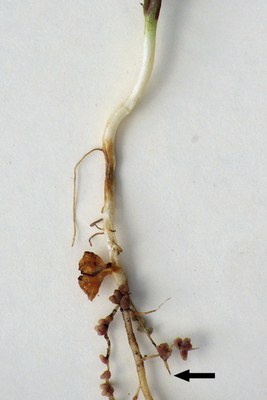 Aphanomyces root rot is caused by Aphanomyces euteiches, an oomycete, or water mold. The disease first was reported in North Dakota on peas in 2014 and lentils in 2018 but likely was a constraint on pea and lentil production for many years prior.

Oomycetes produce very long-lived resting structures called oospores, which germinate in the presence of a susceptible host or, under wet conditions, produce motile zoospores that swim in free water toward host roots, leading to high levels of disease.

Aphanomyces can infect plants at any growth stage if moisture is available, but infection is most common during wet conditions at emergence when soil temperatures are warm (60 F). Disease progression is favored by soil temperatures from 72 to 83 F. The host range includes susceptible varieties of dry edible beans and alfalfa, although this varies based on pathogen genotype.

Damping off is not observed typically with Aphanomyces root rot. Roots infected with Aphanomyces initially appear grayish and water soaked before assuming the characteristic honey-brown or caramel-colored appearance (Figure 4a).

As the disease progresses, the root system will turn blackish brown and decay (Figure 5a). The outer portion of the root tissue is scraped away easily. When Aphanomyces root rot becomes severe, plants become chlorotic, wilt and die prematurely (Figure 4b and 5b).

When environmental conditions are conducive to disease, Aphanomyces root rot is a very serious root disease of peas and lentils. At present, no resistant varieties are available and the oospores can remain viable in the soil for a decade or more. Seed treatment options also are very limited and provide only partial disease suppression.

Figure 4. Symptoms of Aphanomyces root rot in lentils: a) roots and b) above-ground. 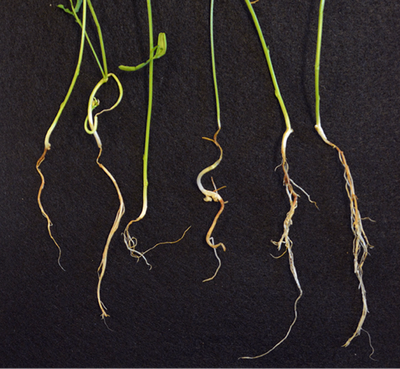 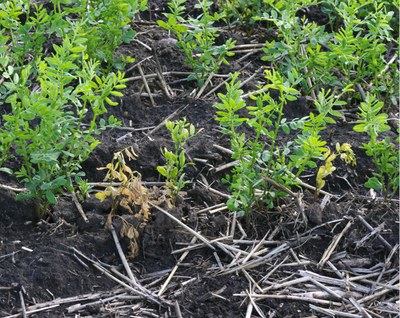 Figure 5. Symptoms of Aphanomyces root rot in pea. a) Golden-brown root discoloration and b) above-ground symptoms. 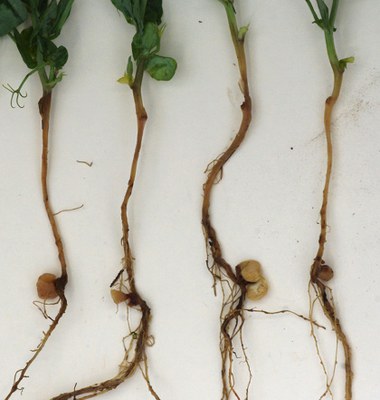 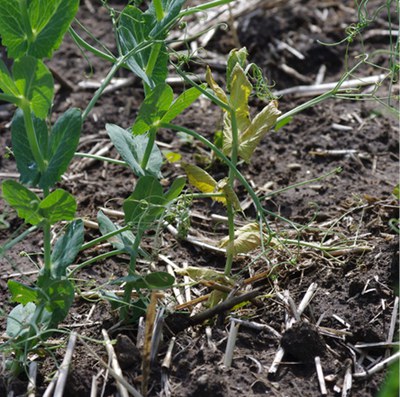 Pythium root rot is caused by several species of the oomycete Pythium, including P. ultimum and P. aphanidermatum. These pathogens infect a wide range of crops in addition to peas and lentils.

Unlike infection by Fusarium spp., Rhizoctonia solani and A. euteiches, symptoms of infection by Pythium species typically include seed rot and damping off, resulting in stand reduction and bare patches (Figure 6).

Infected roots are light brown and gelatinous in texture (Figure 7). Later season infection can cause destruction of lateral feeder roots and brown discoloration of the tap root. Outer root tissue is easily stripped away.

Infection is favored by cold, wet soils (soil temperatures between 50 and 75 F). The risk of losses to Pythium root rot is highest when soils are saturated for one or more days after planting and before emergence. Like Aphanomyces, Pythium can produce long-lived oospores that reside in the soil.

Figure 6. Large areas of poor emergence due to seed rot and damping off caused by Pythium spp. 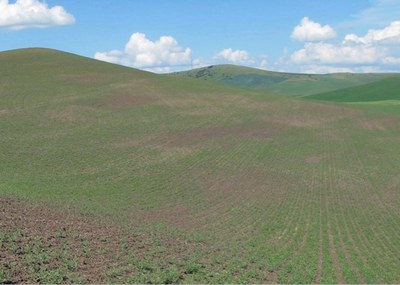 Figure 7. Pythium damping off and seed rot in pea. 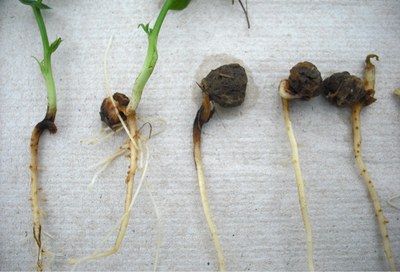 Preventing the buildup of pathogen populations is critical. Once high levels of root rot pathogens are present in the soil, satisfactory management becomes very difficult.

Crop rotation is one of the most critical management tools for root rot. A four-year rotation between peas or lentils is recommended. If Aphanomyces is the causal agent, a six- to eight-year rotation is recommended. Once root rot pathogen levels are high, crop rotation may not reduce the amount of inoculum enough to allow for successful pea or lentil production; therefore, crop rotation is a critical preventive measure to attempt to keep root rot pathogen populations low. Not planting peas or lentils in tight rotations in a wet year where Aphanomyces populations can increase exponentially and cause severe disease is especially important (Figure 8).

Legume crops such as chickpeas, faba beans and soybeans are much less susceptible to Aphanomyces euteiches and could replace peas or lentils in a rotation. Growers also may increase the number of cereal and oilseed crops in between planting peas and lentils.

Figure 8. Images are from the same field where one half (top) had one less year of peas than the other half (bottom). The half-field where root rot is severe was seeded to peas in a very wet spring. 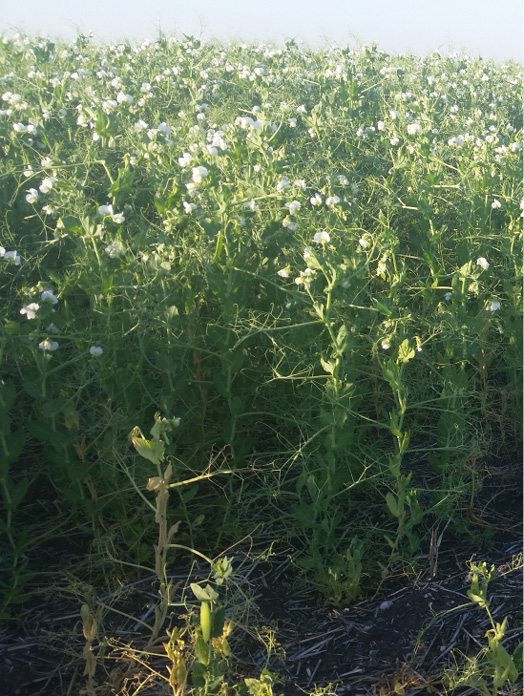 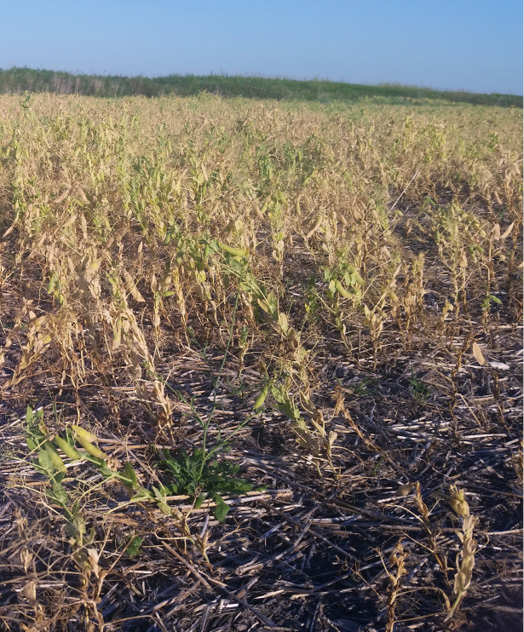 If you have a field heavily infested with root rot pathogens, work that field last. These pathogens can move with soil on tires and equipment from field to field.

Planting conditions that favor rapid plant emergence will reduce susceptibility to seed rot and damping off caused by Pythium spp. Where this disease is of concern, plant as shallowly as possible under warm soil conditions. Avoid very late planting, however, because this will increase severity of Fusarium and Aphanomyces root rot.

Root rot severity may be increased in heavy textured or compacted soil due to impeded root and seedling growth and increased water retention. Low-lying areas of fields are typically most severely affected. Limiting practices that result in compaction also will be beneficial.

Selection of a variety that is partially resistant to root rots can be a very important management tool, if available. No lentil or pea varieties have complete resistance to these soil-borne pathogens; however, research is ongoing. Consult with the most up-to-date information when considering a variety for root rot management.

Seed-applied fungicides are registered for management/suppression of early season symptoms caused by Aphanomyces, Fusarium, Rhizoctonia and Pythium root rots. However, none of these products can provide season-long protection. Fungicide efficacy varies among the different pathogens and can change quickly if pathogens become resistant to a fungicide class. Similarly, the availability of fungicides changes through time. When making decisions about seed treatments, consult the most up-to-date resources, such as the “North Dakota Field Crops Disease Management Guide" (PP622) or the NDSU Pest Management App for the latest guidelines on labeled fungicides in peas and lentils. These resources will indicate which products are registered for the control of these pathogens. The Carrington Research Extension Center website also is a resource for seed treatment research being done on these diseases in North Dakota.

Managing root rot pathogens focuses on prevention and identification because no economically viable options are available for in-season treatment of plants that have been infected by root pathogens. Early identification of the causal organism (pathogen) will help plan management decisions for future seasons.

For accurate diagnosis of root rot diseases, submit fresh, symptomatic plants as soon as symptoms develop. If the plants are not fresh, secondary, opportunistic organisms usually colonize rotting tissues while plants remain in the field and while samples are stored. These organisms can mask and outcompete the pathogen, making diagnosis more difficult.

For optimum sample collection, contact the North Dakota State University Plant Diagnostic Lab for tips. In general, best results are obtained if you carefully excavate roots with a shovel and send the whole plant, including the entire root system.

Remove excess soil, wrap the root in moist paper towels, and wrap the entire plant in dry paper towels. Seal the sample in a bag and store the sample in a cool place or refrigerator until you can ship or deliver the sample to a diagnostician. Ship overnight to the NDSU Plant Diagnostic Lab, ideally early in the week to prevent delay in the mail.

Scout fields often to identify optimum samples. Diagnosis is much more difficult to obtain from dead or severely infected plants, and often molecular techniques are required. While more expensive, these are an option if you wish to explore them. More information can be found at the NDSU Plant Diagnostic Lab website, www.ag.ndsu.edu/pdl and contact information is below. 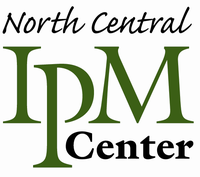 This work is/was supported by the USDA National Institute of Food and Agriculture, Crop Protection and Pest Management Program through the North Central IPM Center (2018-70006-28883).