Early blight of potato is caused by the fungal pathogen Alternaria solani. The disease affects leaves, stems and tubers and can reduce yield, tuber size, storability of tubers, quality of fresh-market and processing tubers and marketability of the crop.

In most production areas, early blight occurs annually to some degree. The severity of early blight is dependent upon the frequency of foliar wetness from rain, dew, or irrigation; the nutritional status of the foliage; and cultivar susceptibility.

Across the Midwestern U.S., foliar infection is the most problematic phase of the disease, whereas in the western portion of the country, tuber infection can be more damaging.

The disease first develops on mature and senescing foliage, and early maturing cultivars are the most susceptible. Potato is the primary host, but the disease also can be severe on tomatoes, and occur on other solanaceous plants such as hairy nightshade.

The first symptoms of early blight appear as small, circular or irregular, dark-brown to black spots on the older (lower) leaves (Figure 1). These spots enlarge up to 3/8 inch in diameter and gradually may become angular-shaped. 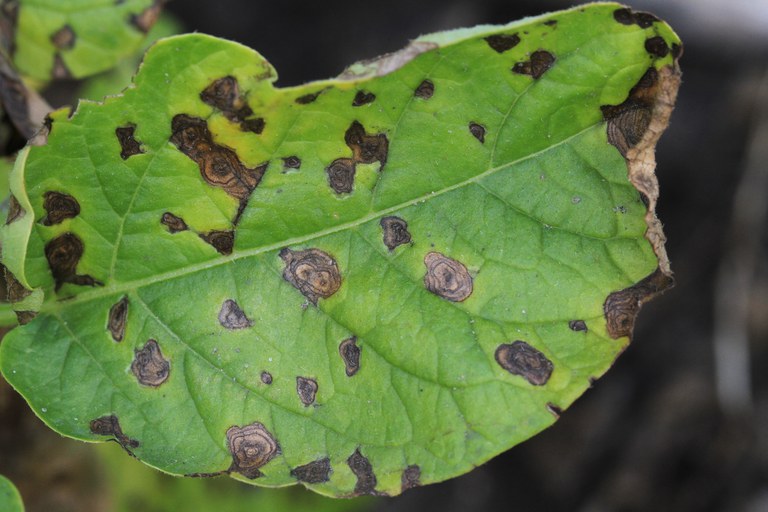 Initial lesions on young, fully expanded leaves may be confused with brown spot lesions (Figure 2). These first lesions appear about two to three days after infection, with further sporulation on the surface of these lesions occurring three to five days later. 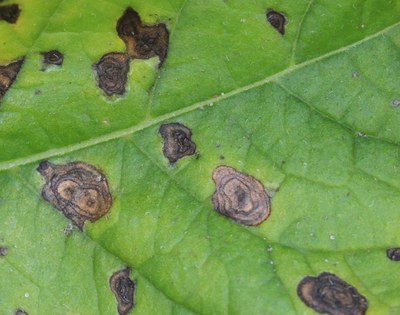 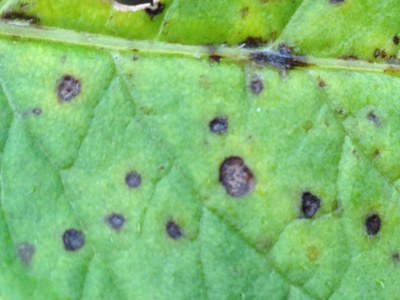 Early blight lesions can be diagnosed in the field easily due to the dark concentric rings alternating with bands of light-tan tissue, giving them a distinctive target spot appearance (Figure 1).

Multiple lesions on the same leaf also may coalesce, or grow together, to form one mass (Figure 3). As lesions coalesce, chlorosis (yellowing of plant tissue) may be visible due to clusters of infection (Figure 4). Elongated, brown to black lesions also may develop on stems and petioles of infected plants (Figure 5). 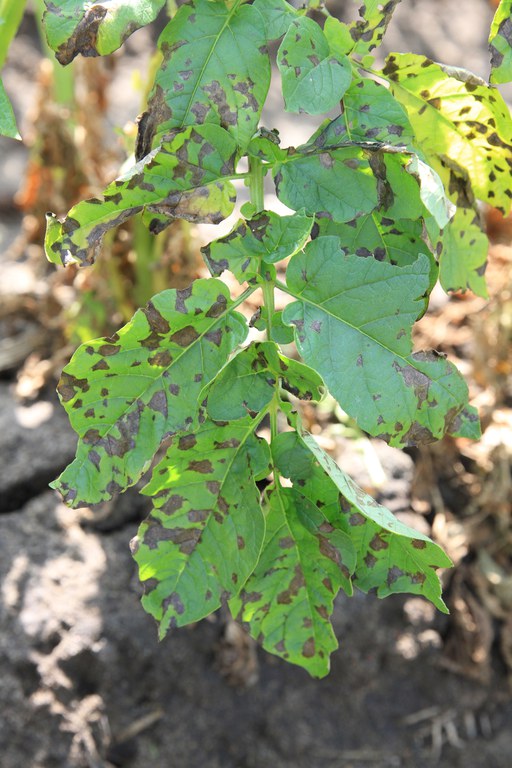 Figure 3. Multiple early blight lesions on the same leaf may coalesce, or grow together. (Andy Robinson, NDSU/University of Minnesota) 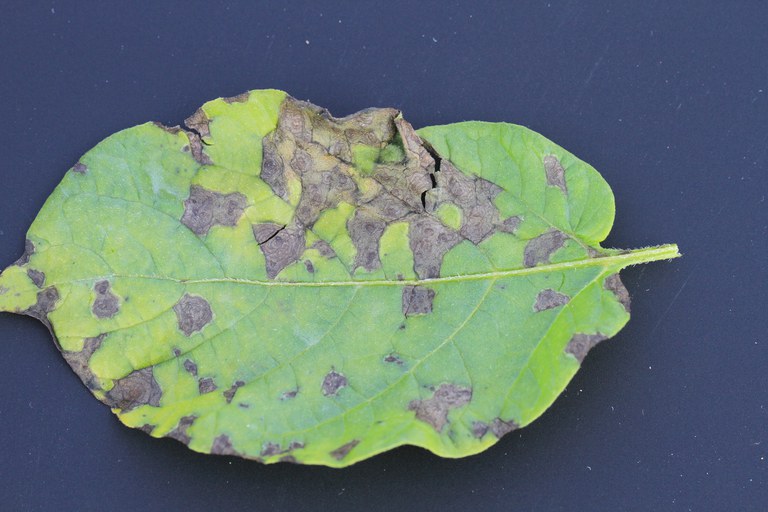 Figure 4. Chlorotic symptoms may develop on infected leaves through time as lesions coalesce and clusters of infection form. (Andy Robinson, NDSU/University of Minnesota) 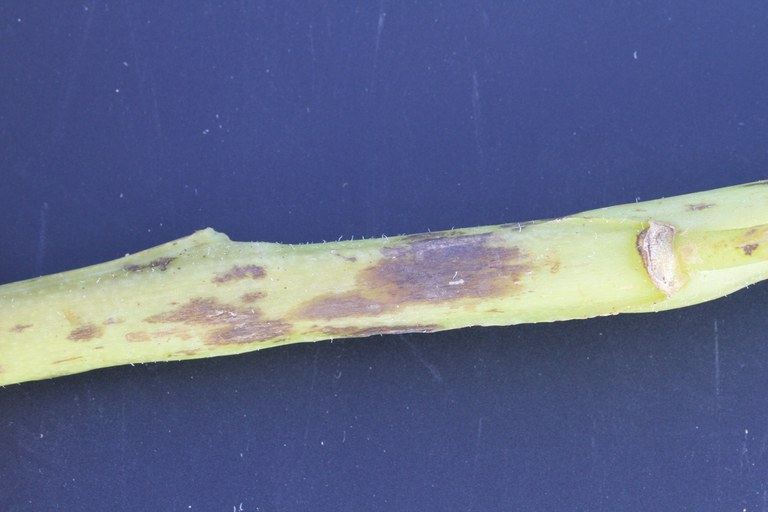 Figure 5. Elongated, brown to black lesions may develop on the stems and petioles of infected plants. (Andy Robinson, NDSU/University of Minnesota)

Later in the growing season, numerous lesions may appear on the upper leaves, and leaves may drop as the infection becomes more severe (Figure 6). Premature leaf senescence, reduced yield, and low dry matter content likely will result from severe foliar infection during the tuber bulking stage. 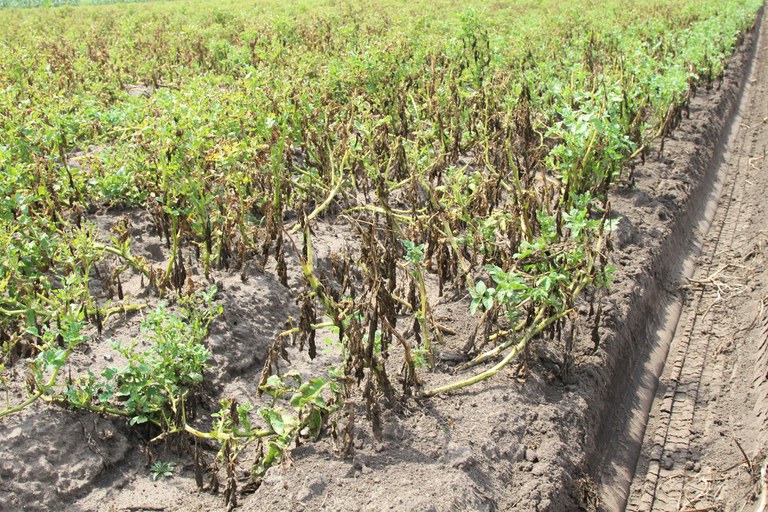 Figure 6. As early blight progresses during the season, numerous lesions may appear on younger leaves in the upper canopy and leaves may drop or dehisce from the stem as infection becomes severe. (Andy Robinson, NDSU/University of Minnesota)

Symptoms of early blight infection on tubers appear as dark and sunken lesions on the surface (Figure 7). Tuber lesions may be circular or irregular in shape (Figure 8) and can be surrounded by a raised dark-brown border. 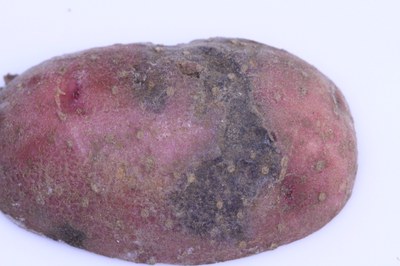 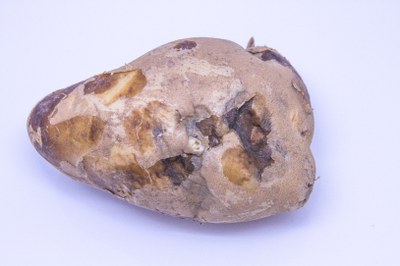 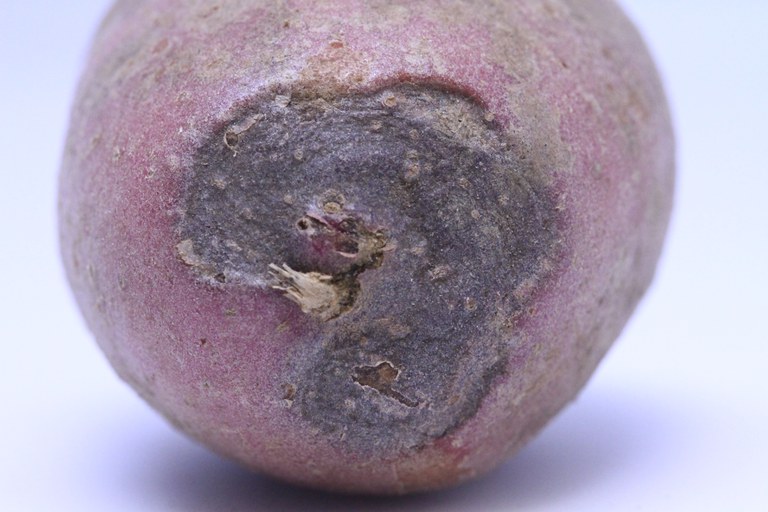 Figure 8. Early blight tuber lesions may be circular or irregular in shape and often are accompanied by a large, raised dark-brown border. (Andy Robinson, NDSU/University of Minnesota)

The underlying tissue is dry with a corky texture and a dark-brown color (Figure 9). Tuber symptoms of early blight infection may become manifest only after months of storage (Figure 10) and can be confused easily with Fusarium dry rot (Figure 11). 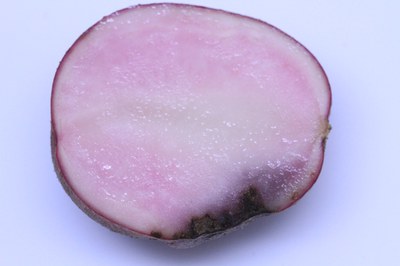 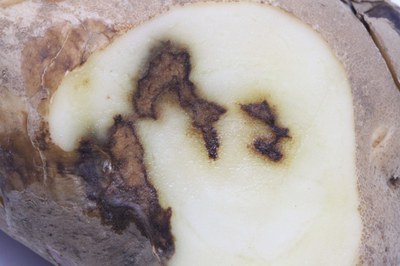 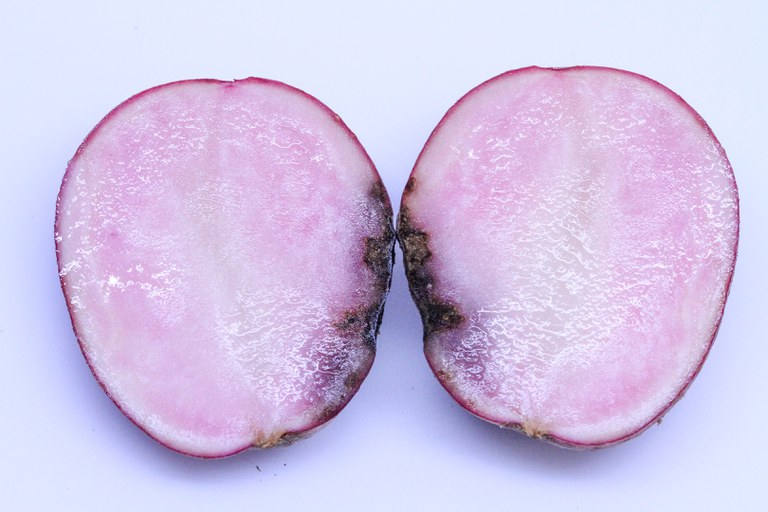 Figure 10. In storage, early blight tuber lesions may continue to develop, but secondary spread of infection to noninfected tubers does not occur. (Andy Robinson, NDSU/University of Minnesota) 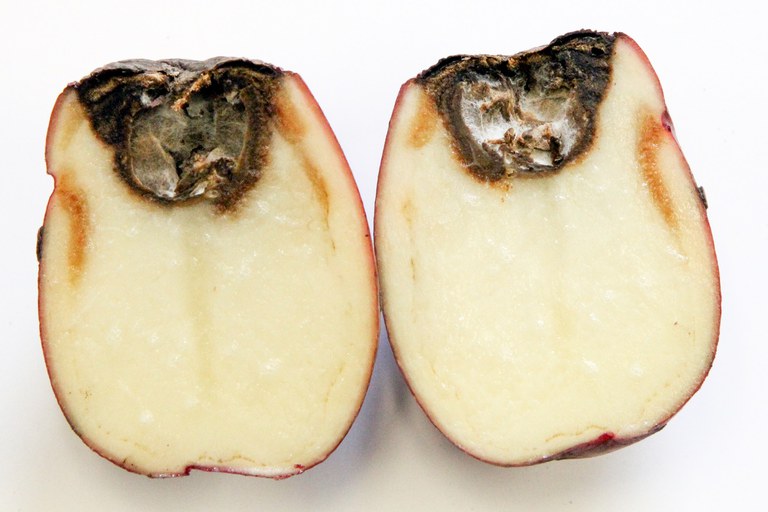 Figure 11. Fusarium dry rot, as illustrated above, can be confused easily with early blight. Similar to early blight, Fusarium dry rot symptoms also include an internal light to dark-brown or black rot that is usually dry with a dark, sunken area on the outside of the tuber. However, Fusarium dry rot may have more extensive rotting that can lead to tuber tissues collapsing or shrinking, causing internal cavities accompanied by a yellow, pink, or white mold. (Andy Robinson, NDSU/University of Minnesota)

The primary infection of potato foliage by A. solani is caused by inoculum provided from other infected hosts or inoculum that overseasoned on infected plant debris. Overwintering spores that serve as the initial inoculum move within and between fields carried by air currents, windblown soil particles, splashing rain, and irrigation water.

Following initial infection, sporulation occurs on lesions, and spores are dislodged under conducive environmental conditions (Figure 12). Alternating wet and dry periods are most favorable for sporulation and dispersal. The spores produced by primary inoculum are responsible for secondary spread of the fungus to healthy tissue, which leads to an exponential increase of foliar infection. 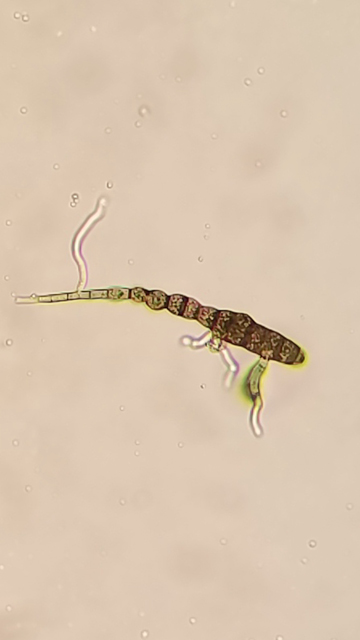 Figure 12. Spores of Alternaria solani, the causal agent of early blight, are moved within and between fields, carried by wind, windblown soil particles, and splashing rain/irrigation water, and survive between growing seasons in infested debris of susceptible hosts, in infected tubers, and on or just below the soil surface. (Sarah Budde, NDSU)

Minimum and maximum temperatures for sporulation and infection of potato by A. solani are 41 and 86 F, respectively, with an optimum temperature of 68 F. Following sporulation, spores are disseminated by wind or splashing from rain or irrigation water, and the number of airborne spores peaks in midmorning and declines throughout the afternoon and at night.

Under high humidity and free moisture, and within the range of temperatures, spores landing on leaves of susceptible plants germinate and may penetrate host epidermal cells directly or enter through stromata or wounds. Many cycles of early blight spore production and lesion formation occur within a single growing season.

The pathogen favors older and senescing leaf tissue, as well as plants stressed by injury, nutrient deficiency, and insect feeding. The rate of infection in the early season is generally low but increases after flowering and is most rapid during tuber bulking later in the season (Figure 13). 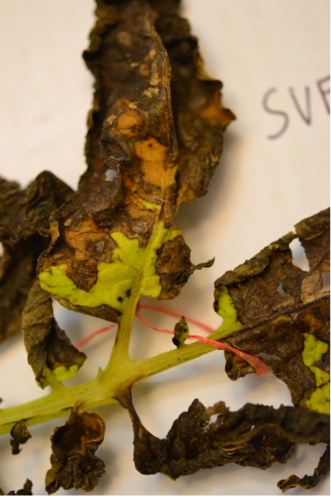 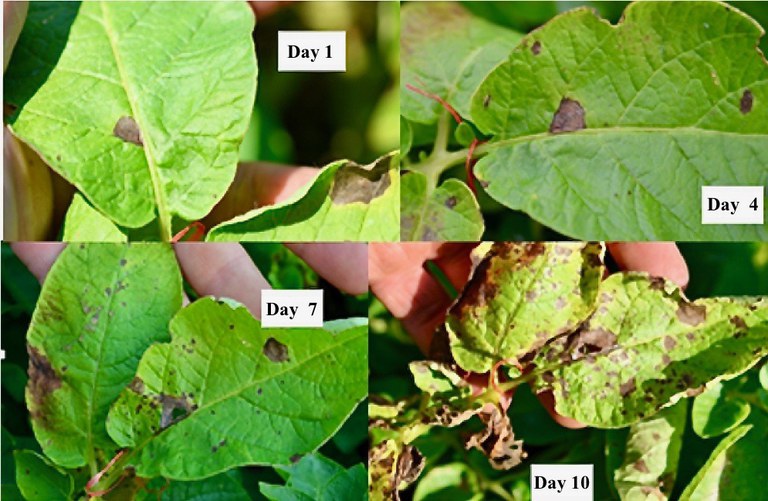 Figure 13. The rate of early blight infection during the early part of the growing season is generally low but increases following flowering. During the tuber bulking stage later in the growing season, foliar infection can increase rapidly. (Alan Pranke, Cavendish Farms)

In addition to survival on infested plant debris, spores and mycelia of A. solani can survive between growing seasons in infected potato tubers and in the overwintering debris of other susceptible solanaceous crops and weeds, including tomatoes and hairy nightshade. Additionally, spores can survive freezing temperatures on or just below the soil surface.

During harvest, tubers often are contaminated with A. solani spores that accumulated on the soil surface during the growing season or were dislodged from desiccated vines. Germinated spores penetrate the tuber epidermis through lenticels and through wounds on the tuber surface caused by mechanical injury.

Tuber infection is most common in potato cultivars that are highly susceptible to skinning, such as red- and white-skinned cultivars. Secondary spread of infection does not occur on stored potato tubers and, unlike late blight tuber lesions, early blight tuber lesions usually do not serve as infection courts for other decay organisms 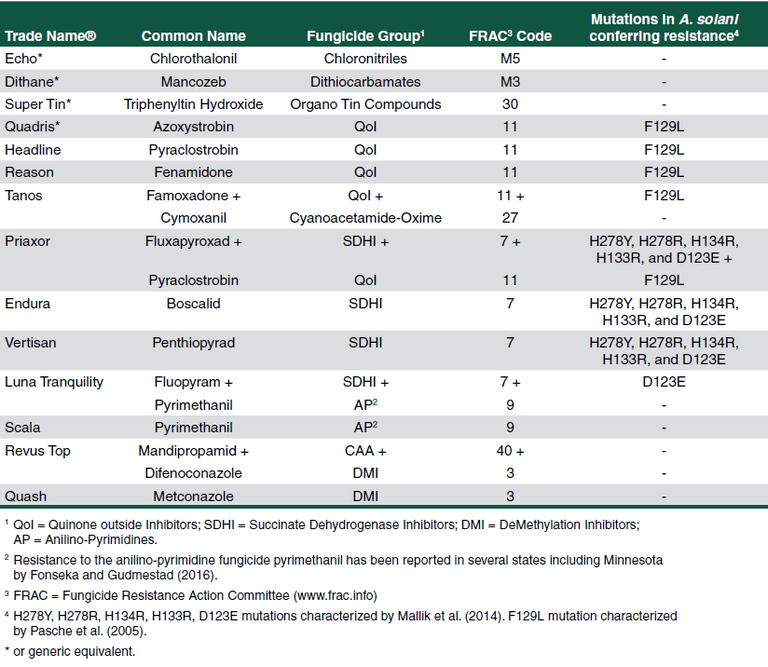 Since most commercially acceptable potato cultivars are susceptible to early blight, the application of foliar fungicides is the primary management tactic. Mancozeb and chlorothalonil are perhaps the most frequently used protectant fungicides for early blight management but provide insufficient control under high disease pressure. Therefore, the application of locally systemic and translaminar fungicides often is necessary for control at high levels of disease pressure, especially under irrigation.

Fungicide selection and rotation should be approached with thought to obtain effective disease control and prevent the early blight pathogen from further fungicide resistance development.

Refer to the most current “North Dakota Field Crop Plant Disease Management Guide” (PP622) for updated information on products, modes of action, and rates for application.

Recent research conducted at NDSU by Bauske et al. (2018a) determined that fungicide resistance in the early blight pathogen to the Quinone outside Inhibiting (QoI) fungicides such as Quadris® and Headline® was highly prevalent. In a survey from 2015, the F129L mutation associated with QoI resistance was detected in 100 percent of isolates collected throughout North Dakota and Minnesota (Table 2). Cross resistance has been documented among many chemistries of the QoIs registered for early blight control in potato.

Resistance to Succinate Dehyrogenase Inhibiting (SDHI) fungicides has also become problematic in recent years. Five different mutations have been characterized as conferring resistance to Endura® and Vertisan®, and the prevalence of mutations conferring high levels of resistance to these fungicides is increasing throughout North Dakota and Minnesota (Table 2).

Resistance to the anilino-pyrimidine (AP) fungicide Scala® also has been reported in several states, including Minnesota (Fonseka and Gudmestad, 2016). The accumulation of fungicide-resistance mutations in the early blight fungus has been demonstrated to have no impact on the survival and parasitic ability of this pathogen (Bauske and Gudmestad, 2018), suggesting that resistance is stable and permanent in the A. solani population.

To reduce the potential for fungicide resistance development in A. solani, we recommend that fungicides be tank-mixed and alternated with chemistries of different modes of action. This tactic is facilitated by the Fungicide Resistance Action Committee (FRAC) code number that can be found on every EPA label on the container (Table 1). Furthermore, selecting later-maturing cultivars, which are less susceptible to early blight, can reduce the number of fungicide applications needed to achieve adequate control.

Table 2. Fungicide resistance level conveyed by mutations in A. solani and percentage of isolates collected in a recent survey by Bauske et al. (2018a) possessing each mutation in North Dakota and Minnesota.

Bauske, M.J., Mallik, I., Yellareddygari, S.K.R., and Gudmestad, N.C. 2018(a). Spatial and temporal distribution of mutations conferring QoI and SDHI resistance in Alternaria solani across the United States. Plant Dis. 102:349-358.