Spongospora subterranea f. sp. subterranea (referred to as S. subterranea), the causal agent of powdery scab and root gall formation in potato, is a soil- and tuber-borne funguslike pathogen. S. subterranea first was reported in the U.S. in 1913. During this same year, the disease was found established in potato-growing states such as Maine, Florida, Minnesota and Oregon. To date, the pathogen can be found causing disease throughout the U.S., as well as several other potato-growing regions around the world.

S. subterranea is able to survive a range of environmental conditions via resting spores arranged in aggregates (sporeball, cystosorus; Figure 1A). Once the pathogen has become established in a field, it can remain infectious for more than 10 years in the absence of potatoes. 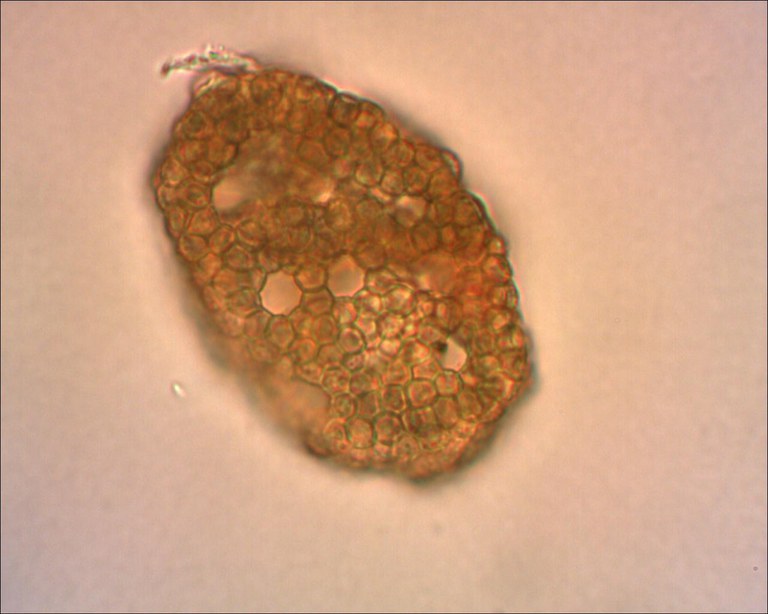 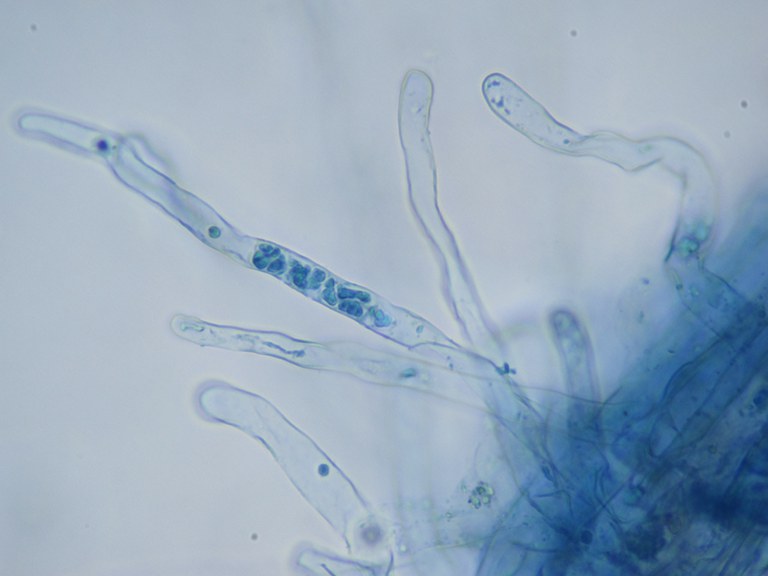 The likelihood of powdery scab developing remains high for up to five years after potatoes are grown in the field. Cool (53 to 63 F) and moist soil conditions (from soil saturation to about 15 percent water content) are conducive for disease development, especially if those conditions are met during the early stages of tuber development.

Powdery scab directly affects the quality of the crop intended for fresh, processing and seed markets. Resting spores produced on tubers and in roots contribute to inoculum buildup, pathogen spread and disease perpetuation in the field.

S. subterranea causes important economic loss in the cultivated potato (Solanum tuberosum ssp. tuberosum); however, the pathogen can infect and produce viable resting spores in other members of the Solanaceae family such as nightshades (S. nigrum and S. physalifolium).

The germination of S. subterranea zoospores (swimming spores) from resting spores (Figure 1A) is stimulated by root exudates of several plant species, as well as micronutrients (for example, iron) commonly found in soil solution. Zoospores released into the soil initiate the disease process by infecting the root hairs of the host plant (Figure 1B); this infection cannot be seen with the naked eye.

Once in the host tissue, the pathogen undertakes several inoculum-producing cycles (polycyclic), thus increasing and spreading the infection in the plant. S. subterranea is one uncommon example of a polycyclic soil-borne pathogen. In addition, this pathogen is the vector of the Potato mop-top virus (PMTV), another pathogen of economic importance in the U.S. and other potato-growing regions across the world.

On tubers, initial powdery scab symptoms appear as purplish-brown lesions that later develop into small blisters occurring as early as 43 days after planting (Figure 2A). Mature symptoms appear as round, slightly raised and usually shallow lesions (1/16 to 1/4 inch in diameter), which may show raised margins (Figure 2B).

Individual lesions may coalesce, increasing the area of the tuber affected by the disease and exposing masses of resting spore aggregates. In some instances, mature lesions do not burst open, appearing as dark, raised lesions (Figure 2C).

Root galls caused by S. subterranea initially are creamy white (Figure 2D) and turn dark brown when they mature (Figure 2E). Root galls vary in size (1/16 to 7/16 inch in diameter) and may appear as soon as 35 days after planting and develop throughout the growing season. 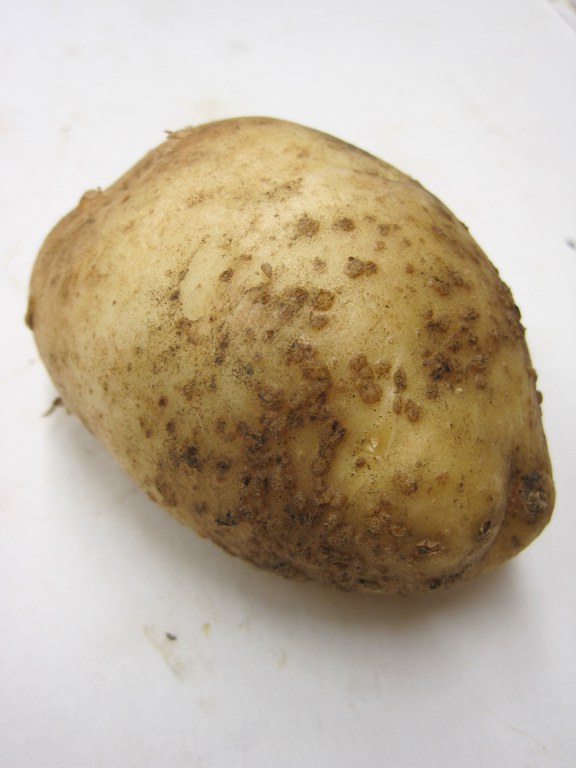 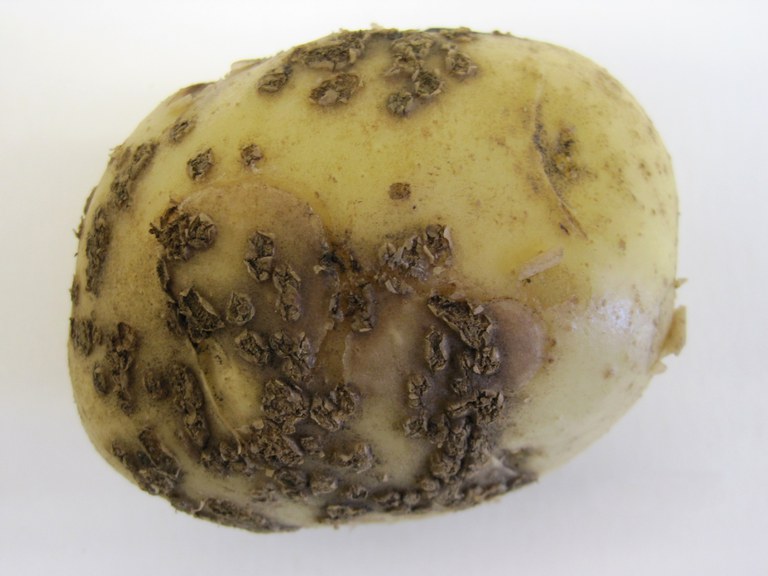 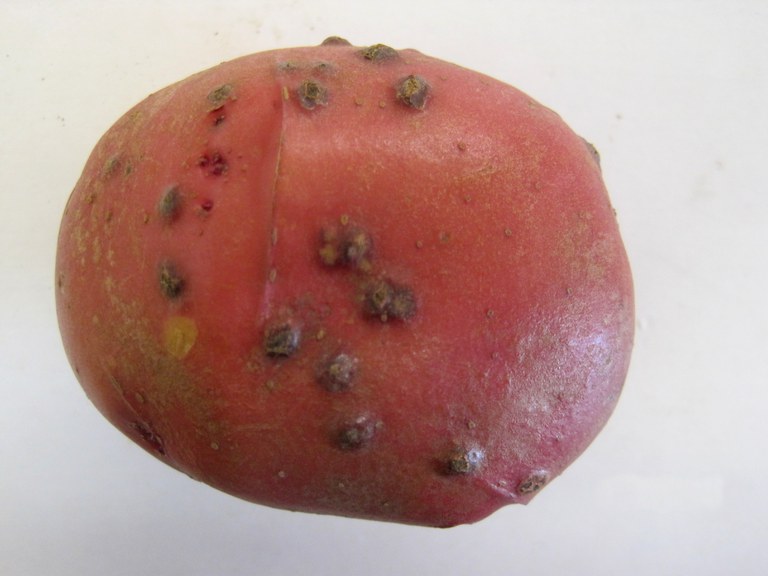 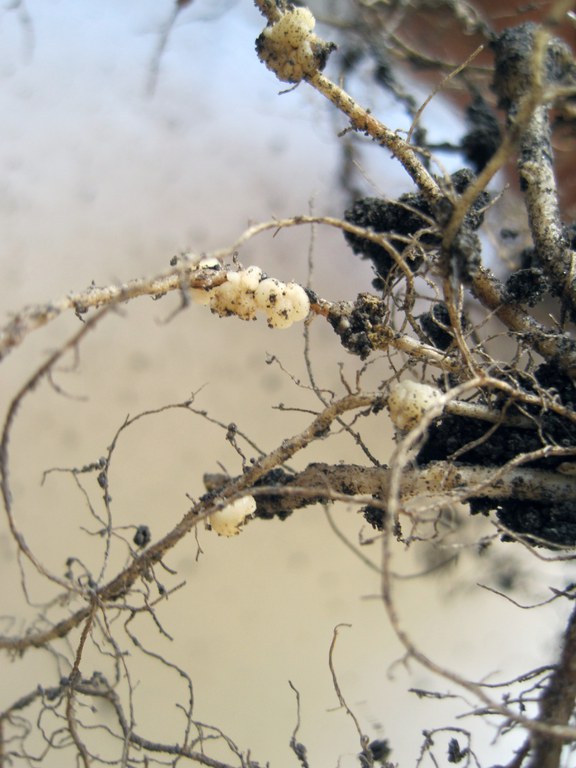 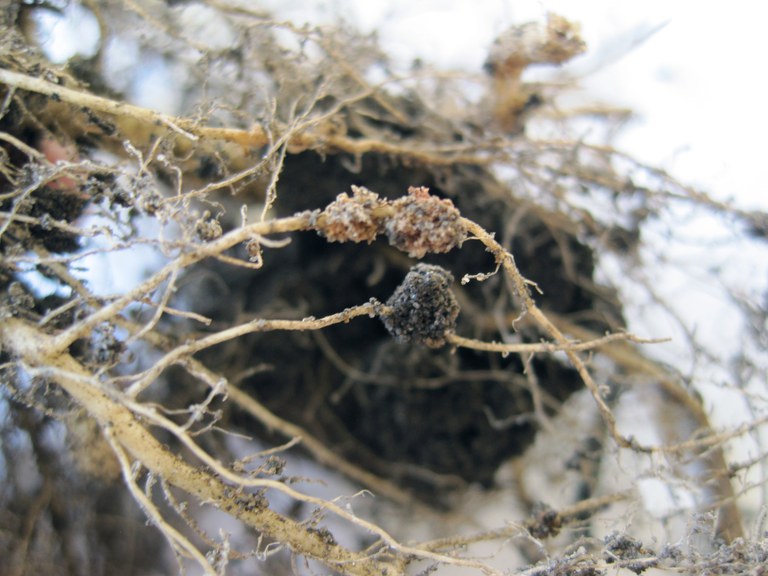 The relative level of susceptibility of 29 potato cultivars is presented here (Table 1). However, producers should consult a plant pathologist if the level of resistance of a particular potato cultivar not shown. 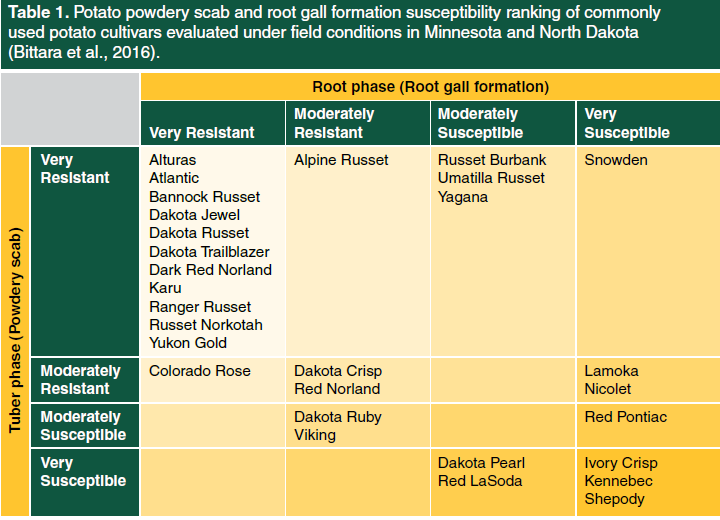 The management of diseases caused by S. subterranea is difficult largely due to the nature of the pathogen. We recommend producers start with field selection and the adjustment of management practices.

Planting clean seed into clean soil is a good beginning. Disease symptoms may increase or be exacerbated under waterlogged soil conditions and under excessive nitrogen levels. The amount of nitrogen also may increase the amount of inoculum returned by the pathogen to the soil. In addition, planting wheat prior to potatoes may increase the severity of symptoms.

In addition, seed-potato tolerances to powdery scab, along with potato common scab, are included in the “scabs” category. The latter is caused by the bacteria Streptomyces spp. and usually develops under suboptimal (dry) soil moisture conditions.

To manage disease caused by S. subterranea, we recommend producers:

* The authors recommend interested parties contact the NDSU Plant Diagnostic Lab to determine the presence of S. subterranea resting spores on tubers and in soil. For more information, the NDSU diagnostic lab can be reached at: