Soybean variety selection in North Dakota should be based on maturity, yield, seed quality, lodging, iron-deficiency chlorosis tolerance and disease reactions. In most years, later-maturing varieties tend to yield more than early maturing varieties when evaluated at the same location. For trial results see the NDSU soybean variety information at https://www.ag.ndsu.edu/varietytrials/soybean.

Soybeans respond to day length and heat units, so the actual calendar date a variety will mature is highly influenced by latitude; each variety has a narrow range of north to south adaptation. Soybean yield and quality are affected if a season-ending freeze occurs before a variety reaches physiological maturity. Dates of maturity are listed in the performance tables and indicate when varieties were physiologically mature. The North Dakota Agricultural Weather Network has a tool for North Dakota soybean growers to predict maturity based on planting date, soybean maturity of the variety grown, and the nearest NDAWN weather station.

Physiological maturity has been reached when 95 percent of the pods have reached the mature color. Varieties may have different mature pod color. Usually, harvest can commence approximately seven to 14 days after the soybean crop is physiologically mature. Relative maturity ratings also are provided for many of the varieties entered in the North Dakota variety trials at various locations. Relative maturity ratings for private varieties were provided by the companies entering the variety in the trial.

The best way to select a high-yielding variety is to use data averaged across several locations and years. Because weather conditions are unknown in advance, averaging across several years’ data will identify how a variety might perform across different weather conditions. Selecting a variety that has performed well in dry and normal rainfall conditions is the best way to identify a variety that does relatively well, regardless of weather fluctuations.

After the longest day of the year (June 21), day lenght will get shorter. The lengthening of the nights is a trigger point for the soybean plant to change from the vegetative to the reproductive phase of plant growth. In the first week of July we can start to see the first flowers on early maturity group soybean plants in North Dakota. Crop plants require heat to develop, grow, and mature. The effect of this heat is cumulative as the growing plant progresses through its life cycle. In North Dakota, Growing Degree Day (GDD) Models have been developed for barley, canola, corn, sugarbeet, sunflower, wheat  and soybean The information can be accessed at the application bar of the North Dakota Agricultural Weather Network (NDAWN)

As the soybeans are starting to develop and the true leaves appear (V1-V3) yellowing of the plant is sometimes observed. In the eastern part of North Dakota the problem most likely is a deficiency of iron (Fe) in the plant. Shortage of Fe can cause a reduction of chlorophyll production showing up as yellowing of the leaves. Iron Deficiency Chlorosis (IDC) is expressed in new leaf tissue as an interveinal yellowing while the veins remain green. As the deficiency progresses, leaf tissue and even the growing point can die. Iron is an essential micronutrient for the plant. Besides being needed in chlorophyll, Fe is also involved in the energy transfer of the plant, is part of certain enzymes, and is needed in the root nodule formation associated the N-fixation.

The effect of IDC is reduced plant growth and can lead to a reduction in yield potential. Even a temporary yellowing is associated with yield loss. Usually there is abundant iron in the soil in North Dakota and only a small amount is needed by the plant. Iron is rather insoluble and with increased soil pH the solubility becomes even lower. Soils with calcium carbonate (lime) in the topsoil are most prone to produce soybeans with IDC. However, increased salt concentration, wet conditions, cool temperatures and readily available nitrate near the plant can all interact and aggravate the IDC symptoms. Compared with other crops soybeans are inefficient in using Fe. If the deficiency is not too severe, soybeans can grow out of IDC as the conditions improve and the larger root system is able to take up sufficient Fe.

There is a difference in how soybean varieties respond to adverse conditions. In soils with poor drainage, high pH, and salinity issues farmers should have selected the most tolerant soybean varieties available for the maturity zone. If IDC is an issue, varieties selection based on IDC ratings should be considered in future plantings. IDC scores for varieties can be found in the NDSU Soybean performance testing results publication A-843, which can be fourn at the NDSU Soyean Varity Results web page

None of the presently grown commercial varieties are completely tolerant against IDC but there are definitely big differences among varieties in their response to IDC. Variety selection is the most important management decision to combat IDC in soybean. Improving internal soil drainage (tile drainage) and leaching out of salt may also help to create more favorable growing conditions in future years.

A soybean intensive management study was conducted to examine combinations of planting rates, row spacing, and special foliar inputs using early and late-maturing varieties to identify the most profitable combination. Best management practices were used in the study including seed inoculation, and seed treatment with a fungicide and insecticide. The results can be found in the publication Selected Management Factors for Economically Increasing Soybean A1718.

North Dakota State University has a long tradition of recommending the establishment of a soybean population of 150,000 plants per acre across row spacings. A recent study evaluating 37 ND seeding rate studies provided than this recommendation can be achieved with a seeding rate approximately 165,000 seeds per acre. The results are presented in extension publication A1961 called "soybean response to planting rates and row spacings in North Dakota.

Replant decisions should only be made after taking stand counts to determine established plant populations as visual observations tend to underestimate the plant population. Narrow row width may exaggerate the impression of low plant stand because there are larger spaces between plants within rows. Replanting is not recommended unless the cause of the previous poor stand can be corrected. Factors to consider when evaluating a stand include: why was the stand reduced (water saturated areas, shallow seeding, planter plugged), how uniform is the remaining stand, what is it’s yield potential, what is the weather forecast for the coming period, is there still enough time to replant (consider maturity of the soybean), and what is the cost of replanting (machinery, seed and labor).

Usually the stand reduction is not uniform throughout the field. Loss of stand is frequently irregular. Gaps may occur in rows, but if the gap is less than 2 feet in diameter, the adjacent soybean plants are capable of developing branches to occupy the space. Plants can adjust to low populations by producing more branches per plant, by increasing the number of pods both on the main stem and branches, increase the number of seeds per pod, or increase seed size. Open spaces more than 2 feet in diameter may lead to reduction in yield.

To determine plant stand, select the area of the field with lowest plant stand and compare with the normal plant stand in other parts of the field. Make at least 10 random stand counts in an area where the stand is reasonably uniform. Use a tape measure and mark off 1/1,000 of an acre for each count. The lengths of rows equal 1/1,000 of an acre with different row widths is indicated in Table 1. Multiply stand count per length of row by 1,000 to obtain stand per acre. NDSU’s recommendation is 150,000 established plants per acre.

Soybean populations can vary perhaps as much as 50 percent from recommended levels without affecting yields, as long as missing gaps are not too large and weeds are controlled. In summary: before even considering re-seeding count the stand and calculate the cost of re-seeding.

Based on research and hail loss studies, the minimum stand for soybean is suggested to be around 75,000 plants per acre, which is approximately 50% of the recommended stand. If you use the “hula hoop” method of determining stand counts in solid seeded fields, you would need a minimum of 1.7 plants per square foot.  With a 50% stand loss, yield reduction will be somewhere between 10-20% of the anticipated yield of timely planted soybean. However, soybean stands will not always be uniform throughout the field, there will be places here and there with higher or lower plant counts. These uneven gaps between plants can potentially result in even lower yields, depending on how many gaps there are or the distance of spacings between the plants. Soybeans have the ability to compensate for low populations by additional branching, setting more pods per plant and filling more seeds per pod. The plants in low population environments may have branches lower on the plant, and they might break before or during harvest thus increasing the potential for greater harvest losses. Also some of the pods will develop lower on the plant. Extra care and efforts during harvesting can reduce this harvest loss problem. It is often a difficult decision whether to let a low population crop develop or to re-plant. Some producers have asked about seeding extra soybeans into the uneven or thin stand. In the case of poor stand establishment, replanting alongside the established seedlings, to patch up or thicken the existing stand, seldom improves yields. However, repair planting often leads to timing difficulties with crop management like weed control and harvest date. When dealing with unacceptably low stands, significant yield improvement will be best achieved when the original soybean stand is so poor that it needs to be destroyed and a new stand re-established. However, it is advised to replant with an earlier maturing variety to compensate for the shorter growing season left before the first fall frost. Producers also need to be aware that there is an additional cost to buy seed, work the land, and plant the seed. The yield potential of the later planted soybean will be lower when compared with timely planted soybeans.

Some soybean growers in the area are interested in the use of foliar fertilizers, and there is currently a multitude of products available to soybean growers. Producers often use these products in addition to fungicide and/or insecticide applications during early soybean reproductive development. However, with low profit margins, it is important to understand the effect of foliar fertilizers on soybean yield and economic return. 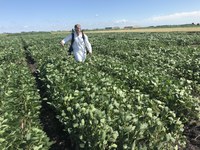 Currently, extension agronomists are working together to evaluate commonly marketed foliar fertilizer products across the U.S. This will help us identify environmental and soil factors where yield response to foliar fertilizers is most likely to occur. The objectives of this project are to 1) Identify yield response in soybean to foliar nutrient applications of commonly marketed products and 2) Conduct economic analyses on the value of these products. This trial was first conducted in 2019 and is repeated in 2020. In North Dakota, we have one site with a randomized complete block design with eight replications of treatments. All agronomists are using common management practices representative in their state.

As there was not yield gain, any application of the products in 2019 resulted in a lower financial return per acre due to the cost of the foliar fertilizer. The summary of results provides more details.