The Armyworm and the Army Cutworm

Armyworm and army cutworm feed on a wide variety of crops in North Dakota. Although the names are similar, these two insects are distinct, feeding at different times during the growing season. Identifying and finding these insects, and recognizing when they become an economic threat will aid in successful pest management.

The adult armyworm is a light brownish gray moth or “miller” (Figure 1) with a conspicuous white spot about the size of a pinhead on each front wing. When expanded, the wings are about 1½ inches across. 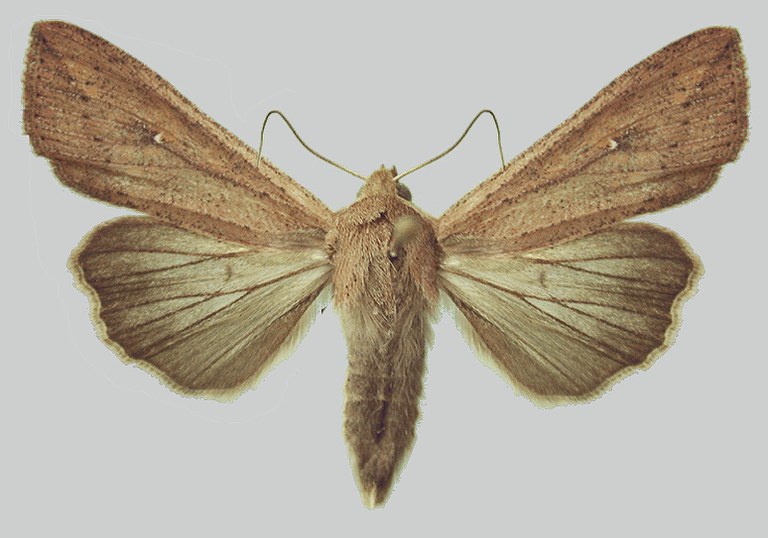 Armyworm larvae (Figure 2) have five pairs of prolegs. Their color varies from pale green to tan in the early growth stage to dark green to black in later stages. The head capsule is brown with netlike patterns. 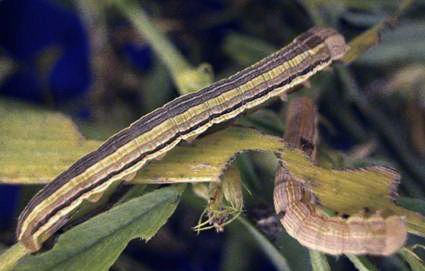 Full-grown larvae are smooth, striped and almost hairless. They grow to a length of 1½ to 2 inches. A series of longitudinal stripes on the body are arranged as follows:

The armyworm does not survive North Dakota winters. Armyworm infestations are due to moth migrations from the South. Heavy infestations in southern states produce large moth numbers that fly or are blown northward on southerly winds.

Moths lay eggs at night in folded leaves or under leaf sheaths of small grain plants and other grasses. They prefer to lay eggs in moist, shady areas of lodged, or hail- or wind-damaged grains or grasses.

Armyworm eggs look like small, white beads laid in masses or rows resembling miniature pearls. In eight to 10 days, eggs hatch into larvae (or caterpillars). Larvae pass through six instars (or stages) and complete feeding in three to four weeks.

Larvae stay in the area where they hatched until fully grown or until they run out of food. If all food is consumed, larvae often move in hordes or “armies,” eating and destroying vegetation as they move.

When feeding is complete, larvae move under litter and soil clods, or burrow 2 to 3 inches into the soil, where they make small cells and pupate (resting, nonfeeding stage) (Figure 3). About two weeks later, moths emerge from pupal cases, mate and lay eggs for the next generation. Typically, one generation is produced in North Dakota during most seasons. 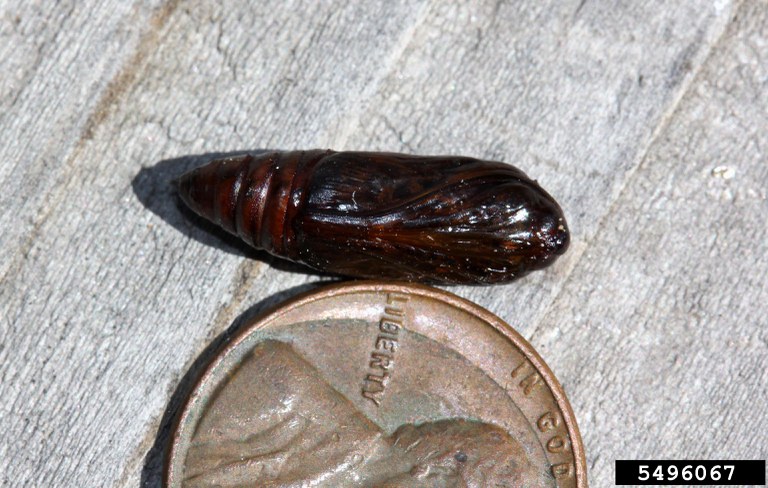 The armyworm primarily is a pest of grasses, small grain crops and corn in North Dakota. The insect also will attack alfalfa, beans, clover, flax, millet and sugar beets. 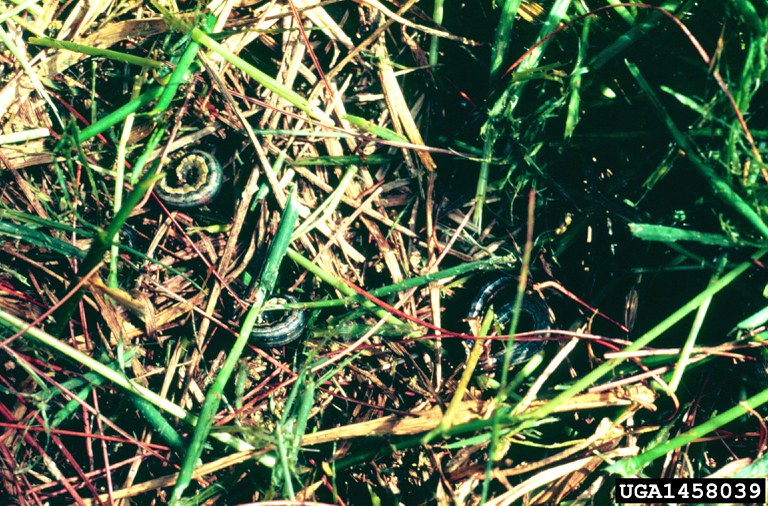 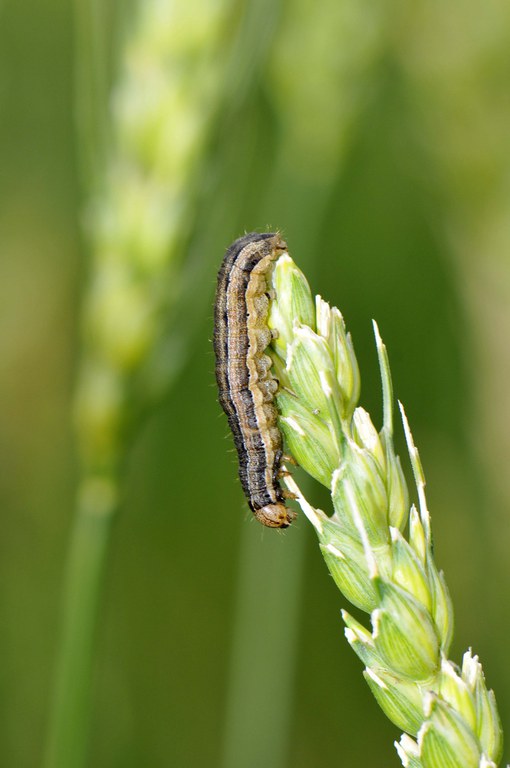 Feeding and movement occur at night or on cloudy days. During the daytime, armyworms hide under vegetation, or loose soil, or in soil cracks.

Larvae consume increasing amounts of vegetation as they grow. Because they feed at night and hide during the daytime, armyworms often cause considerable damage before being discovered. Armyworm infestations often are sporadic, so scout and make treatment decisions on a field-by-field basis.

For proper pest management, detecting and managing armyworms while they are small and before extensive damage has resulted is important. Mature larvae that have completed their feeding are more difficult in terms of control and economic return. Late spraying for armyworms often is referred to as “revenge” spraying because the crop damage already has been done and no economic benefit is realized.

Initial field scouting for armyworms should be done in field margins, low areas with vigorous, thick grass, and areas where plants have lodged. Indications of armyworm feeding include leaf defoliation, worm frass (droppings) around the base of plants and severed leaf material that has fallen to the ground (Figure 4).

Look for larvae beneath plant debris around the base of plants and on heads of wheat and barley. Populations often are higher in fields with grassy weeds or grass cover crops.

Blacklight traps or pheromone traps are used to monitor for armyworm moths during the summer. Traps are useful for alerting pest managers when armyworms have migrated into the area and providing information on the armyworm’s relative population densities. However, trap catches do not indicate the potential damage from armyworms in field crops.

An inexpensive bucket-styled trap often is used for pheromone trapping armyworms (Figure 6). An advantage of using pheromone lures is that they are species-specific. The sex pheromone of the female usually is used in the traps to attract the male moth. 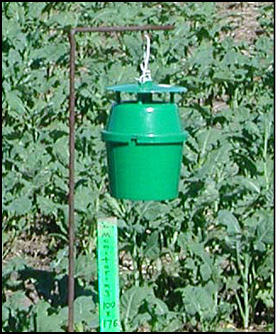 Treatment is recommended if the following conditions are met:

If armyworms are more than 1¼ inches long, control is not likely to provide economic return.

The use of insecticides is a common and effective method for the management of economic populations of armyworm. When larvae are larger than 1¼ inches, no insecticide is recommended because larvae are mature and will be pupating (nonfeeding, resting stage) soon (Figure 3). In this situation, the damage already is done.

Seedling corn: 10 percent of the plants are damaged and larvae are less than ¾ inch

Tassel stage: Minimize defoliation at or above the ear leaf. Protect pollinators from insecticide poisoning by spraying in the late evening or early morning in tasseling corn. 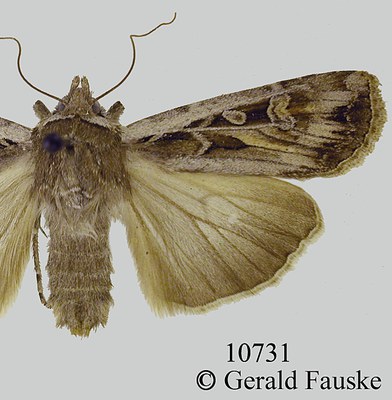 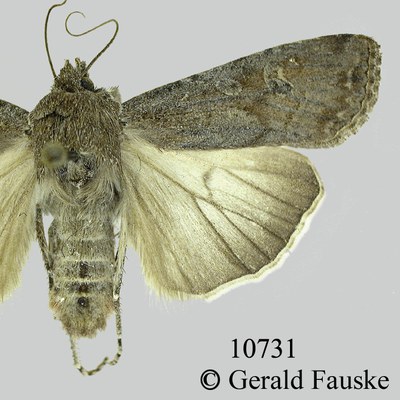 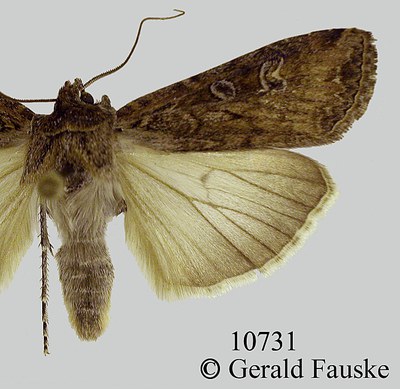 Army cutworm larvae (Figure 8) are 1½ to 2 inches long when mature. They are green to black, with the dorsal side darker than the ventral side. Look for two alternating dark and orange stripes on the sides and a pale white line down the back. The head is brown with darker spots. 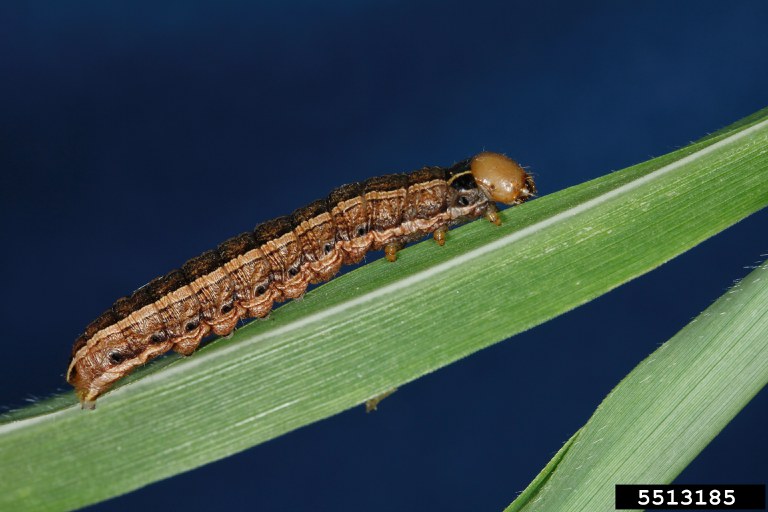 Only one generation of army cutworms is produced annually. Army cutworms overwinter as partially grown larvae in the soil.

Moths complete their development in the spring and pupate as summer approaches. Adults emerge from the soil in late June. After a brief feeding period in the spring, moths fly to the Rocky Mountains in Montana or other mountainous areas in July and August.

Moths feed on the nectar of alpine flowers, and aggregate in large numbers under soil lumps, rocks and stumps during the day. Army cutworm moths serve as an important food source for grizzly bears.

From late August to late October, the moths become active and fly back to the Plains to lay eggs in soft soil of freshly cultivated weedy fields or newly seeded winter wheat fields.

Eggs are laid singly. Each female can lay 1,000 or more eggs. When moisture is adequate in September, eggs hatch in a few days to two weeks, and larvae feed for as long as the weather permits. Larvae remain in the soil during the day and come out at night to climb up on plants to feed on leaves.

Larval development ceases when the soil freezes. Larvae usually are half grown at this time. Fall moisture is necessary for larvae to survive.

Cutworms remain inactive just beneath the surface of loose soil until the following spring. Once the soil has warmed, larvae emerge and start feeding on available vegetation. When larvae mature, they pupate (Figure 3) about 2 to 3 inches below the soil surface in late May or early June.

The army cutworm is a climbing cutworm that “grazes” on the leaves of its host plants (Figure 9). In the north-central Great Plains states, army cutworms primarily are an early season pest of cereal crops, especially winter wheat in the Dakotas and Montana. 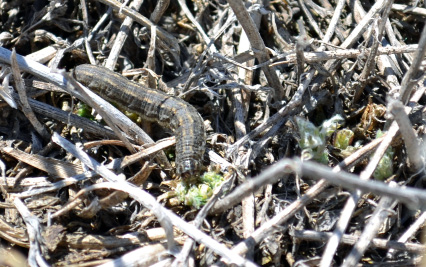 As with other cutworms, they have a wide host range and can feed on a wide variety of crops, including alfalfa, barley, canola, field corn, flax, mustard, oats, sugar beets and wheat. They also feed on garden plants, various weeds and grasses.

When the food source is depleted, larvae may move in large masses to new areas, thus the common name “army” cutworms. Movements of up to 3 miles have been recorded. However, these large-scale movements are uncommon.

Outbreaks can appear suddenly, often preceded by a year with a dry July and a wet fall. An abundance of moths in June does not necessarily mean a cutworm outbreak the following year.

High rainfall in July can reduce moth populations by drowning or covering them with mud. A dry fall, especially during September, reduces overwintering larval populations by delaying the hatch or increasing the mortality of eggs and newly hatched larvae through desiccation.

As with armyworms, detecting and controlling army cutworms while they are small and before they cause significant crop losses is critical.

Monitor fields, especially small grain fields, in early spring for signs of small holes in plant leaves or plants with missing leaf tips. Larvae are found under rocks and dirt clods or in the upper 3 to 4 inches of soil. On cloudy days or late afternoons, larvae feed at the base of plants.

When scouting fields for cutworm larvae, use a knife or trowel to scrape soil away from plants (including weeds) to find larvae. A screen or sieve can be helpful in separating larvae from soil.

When 800 army cutworm moths or more are trapped from early August through the end of October, the risk of damaging larval populations is high next spring. However, weather conditions can influence populations of moths or larvae greatly.

The use of insecticides can be an effective method for the management of economic populations of army cutworm. Because damage may appear sporadic, spot treatments of insecticide may suffice for controlling populations.

Under drought conditions, the economic threshold may be a lower number of larvae per foot of row. Treatment is not recommended when larvae are mature and done feeding.

Insecticides may be applied with ground or aerial equipment. Refer to insecticide labels for recommended water volumes to ensure thorough, uniform coverage (usually 15 to 20 gallons of water per acre (GPA) for ground applications and 3 to 5 GPA for aerial applications).

The best timing for insecticide applications is in the evenings or on cloudy days when armyworms or army cutworms are feeding actively. Check preharvest intervals (PHI) if the treatment is close to the crop harvest.

When armyworms or army cutworms migrate from small grains into later row crops, spray two to three swaths ahead of the infestation in the direction of movement to form a barrier strip.

Please consult the most current “North Dakota Field Crop Insect Management Guide” (E1143) for a listing of available insecticides for control of armyworms and army cutworms..

Beneficial insects, such as lacewings, ladybugs, minute pirate bugs, parasitic wasps (Trichogramma species), parasitic flies (Tachinidae) (Figure 10), and other arthropods kill eggs or larvae of armyworms and army cutworms. One of the most effective predators of armyworm larvae is birds that feed on larvae when abundant. Fungal diseases and viruses also play a role in reducing larvae of both species. Natural enemies disrupt the life cycle of armyworms and army cutworms, lowering pest populations. 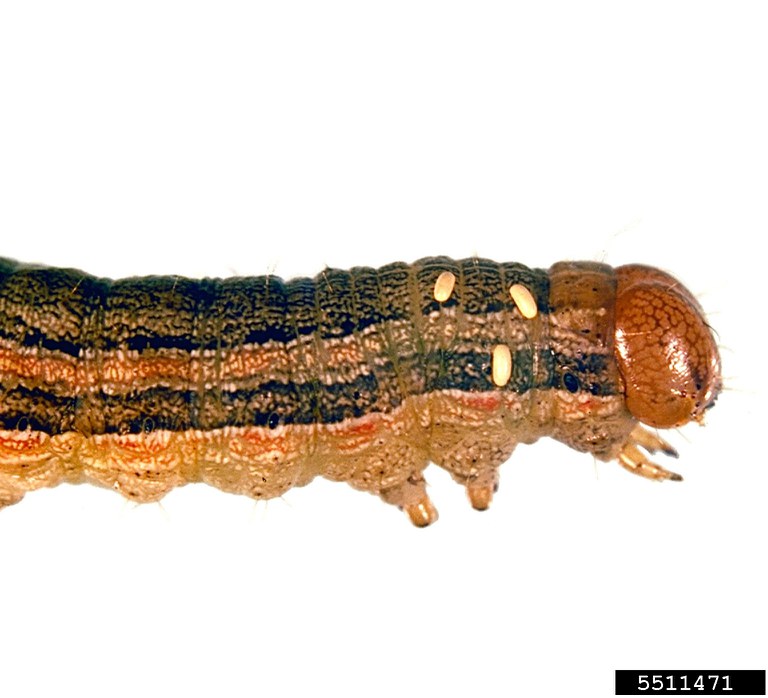 Printing of this publication is supported by a Great Plains Diagnostic Network grant from a subcontract under the U.S. Department of Agriculture-National Institute of Food and Agriculture.