This publication provides background information about growing hard white wheat, the challenges of its production and the current recommendations for growing it in North Dakota. 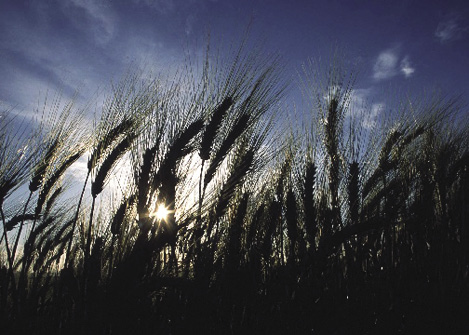 What is hard white wheat?

Hard white wheat is the newest class of wheat marketed in the U.S., but it is not new to the rest of the world. Wheat in this class has a hard endosperm and white bran (Figure 1). Except for the absence of color in the outer seed coat and typically being more prone to weathering, hard white wheat is identical to hard red wheat. The white bran color does not alter the starch characteristics or protein functionality of the kernel. 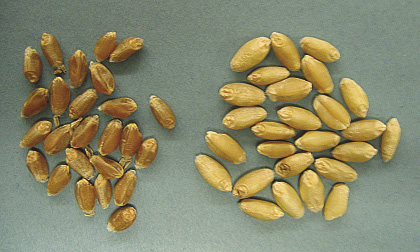 Hard white wheat is used in whole-wheat and high-extraction flour applications such as pan breads, flatbreads and specialty noodles. In the hard white wheat quality class, the U.S. Department of Agriculture makes no distinction between winter and spring types.

Production of hard white wheat in the U.S. is on less than 2 million acres, but it expanded significantly from 2002 to 2005 with the aid of an incentive program the USDA funded. Kansas and Colorado, the largest hard white producing states, grow winter types.

Why does the U.S. need to expand hard white wheat production?

Demand for hard white wheat exists in the domestic and export markets. Millers are capable of extracting more flour of the color and ash content they desire from the white grain.

Figure 2. Loaves made of whole grains from white wheat show a distinct color difference from that of red wheat and taste more like the traditional white bread consumers prefer.

In addition, with fewer phenolic compounds and tannins in the bran, white wheat imparts a less bitter taste to the final product. Because of the interest in increasing the intake of fiber through whole-grain consumption in the U.S., white wheat is being used as a way of producing whole-wheat bread with much of the same appearance and taste as traditional white bread made from refined red wheat flour. White wheat also is preferred for use in high-protein Asian noodle and bread products.

Due partly to its proximity to the market, Australia supplies much of the hard white wheat to the Asian markets. Increased production of hard white spring wheat in the U.S. could allow U.S. producers to compete for a greater share of this market. 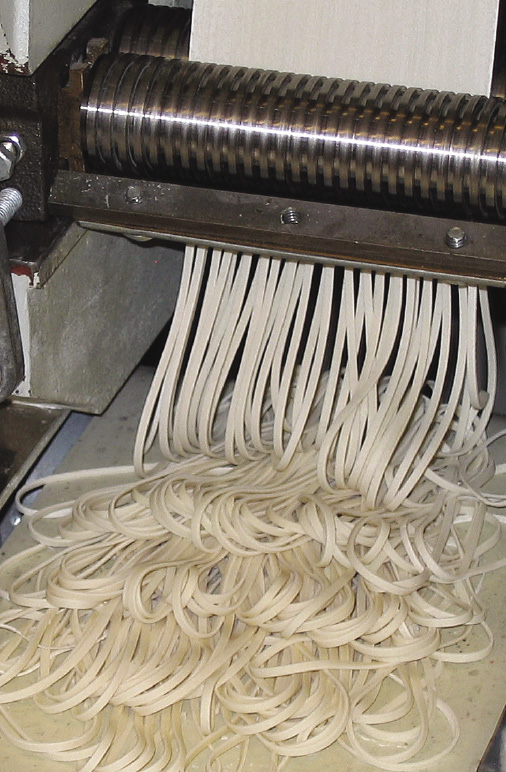 Figure 3. Unlike pasta products, which are extruded, Asian noodles are cut from sheets of dough.

A positive for our region is the fact that millers around the world are very interested in obtaining hard white wheat with the same quality characteristics (e.g., protein content of approximately 14 percent or greater and strong gluten) of the hard red spring wheat they purchase for top-quality products. Customers in Asia speak of their desire for a “white DNS,” referring to Dark Northern Spring, the highest (premium) quality subclass of hard red spring wheat.

For all Asian noodle products, low ash (1.3 to 1.4 percent) and low polyphenol oxidase (PPO) activity are necessary. Polyphenol oxidase is an enzyme that breaks down the polyphenols present in wheat food products when exposed to oxygen (Figures 4 and 5). Many Asian noodles sold as fresh or refrigerated products and made with flour high in PPO activity take on a grayish color, which is unacceptable to consumers. Some Asian buyers also prefer wheat varieties that exhibit a softer, spongy “mouth feel” when eaten. This smoother noodle texture is gained from varieties that have a partial “waxy” or lower amylose starch endosperm. 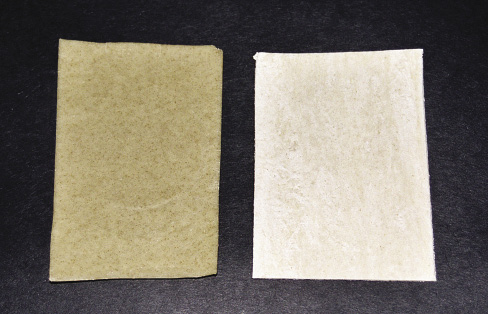 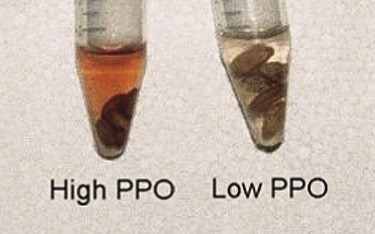 Figure 5. Seed analyses in a buffer solution of varieties with high and low PPO activity.

What varieties of hard white wheat are available for production in North Dakota? 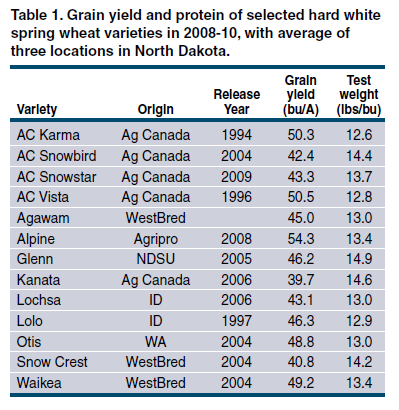 The following varieties have been tested in North Dakota and have been compared to hard red spring wheat varieties for their agronomic performance (see Table 1 for the results from 2008-2010). 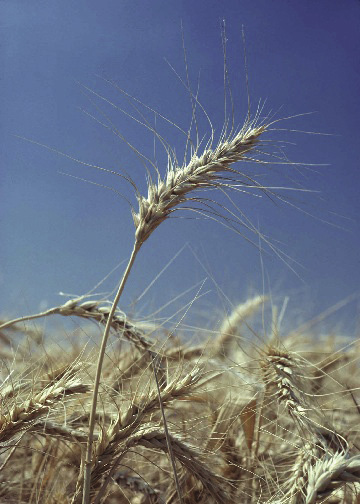 Where can producers obtain seed of hard white wheat varieties?

Knowing where you will market your wheat before planting is important because white wheat varieties vary considerably in their end-use qualities. Seed of Alpine was the only named variety available from certified seed growers in North Dakota in 2014. Check a current North Dakota Field Inspected Seed Bulletin for information on seed producers with seed of these white wheat varieties.

Wendy may be available from the South Dakota Crop Improvement Association. For a listing of current growers

Management practices that optimize hard white wheat production are basically identical to those used for hard red wheat. Although end users require a range in protein content for their products made from hard white wheat, in most cases, high-protein white wheat will be in highest demand. Nitrogen management and variety choice should focus on producing a crop with high grain protein.

Most of the available hard white wheat varieties were developed by breeding programs outside of North Dakota and generally lack the level of disease resistance needed, particularly for the eastern part of the state. Fungicide applications for foliar diseases and/or scab may be required in the more disease-prone regions and in seasons with high disease pressure to obtain reasonable yields with these varieties.

Segregating white wheat from red wheat is important during production, storage and marketing because wheat classes with more than a 1 percent admixture of a contrasting class will result in a grade reduction. Mixing white wheat that has more desirable traits for noodles with our premium red wheat could have an adverse effect on our traditional leavened bread market.

Equipment used in planting and harvesting, and storage facilities, should be cleaned when going from one class to another. Use certified seed and avoid planting white wheat for at least two years after a wheat crop of a different class to reduce unwanted red wheat volunteers.

Maintaining a bin that will be used only for white wheat can help reduce the chance of mixtures after harvest. Notify your elevator when delivering wheat so its staff is able to segregate the white wheat from other classes. As white wheat develops as a class in North Dakota, identity-preserved programs with producer contracts still might be the norm.

Where can I sell white wheat?

What is the future of hard white wheat?

New varieties and production practices will focus on high protein and strong gluten characteristics to make them viable for production of leavened breads and as high-quality wheat flours. Midprotein hard white winter wheat likely will supply the market adequately for flatbreads and even some types of Asian noodles.

A price incentive likely will be needed to stimulate hard white wheat production in the short term and to cover the added costs associated with segregation, and agronomic and harvest risk. Because North Dakota hard red spring wheat is a premium class in the U.S. and globally, this incentive would have to be above that already paid.

Hard white wheat has the potential to gain additional markets. Australian hard white wheat is the dominant wheat class for the lower-protein noodle markets of many Asian countries; however, hard red spring wheat still is used in these countries for making leavened breads and mixing with the Australian wheat to improve the “bite” characteristic of higher-protein noodle products. Hard white spring wheat with similar protein content and gluten strength as hard red spring wheat rapidly could replace more of the Australian wheat in Asian noodles.

What should I consider before growing hard white wheat?

You should consider the following question before producing white wheat:

Where can I find additional information on hard white wheat production and marketing?

You can find additional information about hard white wheat at the following websites:

This is a publication developed by the Kansas State University Experiment Station and Extension Service in 1998 with background information on the development and use of hard white winter wheat in Kansas.