How to Sample for Soybean Cyst Nematode (SCN)

This page was adapted from the article, "How to Sample for Soybean Cyst Nematode (SCN) ," which appeared in Crop & Pest Report on August 27, 2020

Where can I pick up sample bags? To participate in the North Dakota Soybean Council + NDSU Extension sampling program, pick up sampling bags at the county Extension office. Agents will have additional information on sampling.

What am I sampling for?  SCN is a parasitic nematode that will complete two to three life cycles each growing season. Each female will produce 100-200 eggs, which are protected within her body wall after she dies (called a ‘cyst’) (Figure 2a). When we soil sample, we are measuring the amount off eggs in the soil, which are measure in 100cc (which is approximately 3.4 ounces).

How do I sample?  Aim for the roots, sample right next to the plant! You only need to go 6-8 inches deep. Take 10-20 small samples, mix up, and fill soil bag with the composite sample.

What sampling strategy do I use?  There are several strategies, depending on the mission. For those who know they have SCN, you can determine how well their management tools are working by evaluating egg levels in the soil. The best strategy to do this is to take soil cores from similar areas in a field and group the samples (strategy 1 and 2 on Figure 2b). For those who are sampling to determine if they have SCN at all, it is best strategy is to focus on areas when SCN is most likely to be introduced into a field, such as field entrances, shelter belts, and frequently flooded areas (strategy 3 on Figure 2b).

Where to sample?  SCN moves with anything that moves soil, loves high pH, and often doesn’t show above ground symptoms. Consequently:

Focus on areas that are likely to introduce soil to your field, such as:

Additionally, several areas should be considered suspicious for SCN, and can be sampled.

How do I interpret the results?  Results come back measured in eggs per hundred cc of soil (eggs/100cc). A 100cc is about 3.4 ounces. During the process, samples are diluted and measured in multiples of 50. If the samples are 0, no eggs were found. Samples with 50-200 eggs indicate very low levels and should be viewed as suspicious (but not necessarily confirmed). There are other nematodes laying eggs in the soil, and these are often indistinguishable from SCN. Anything higher than that should be viewed as a positive, and, it should be managed. SCN can explode very quickly, so a find of 1,000 eggs/100 cc should be aggressively managed, so it doesn’t become 10 or 50 times higher after the next planting of soybeans.

The SCN Coalition [www.thescncoalition.com] is a partnership of private companies, universities and soybean checkoff organizations that have rallied together to speak with one voice about SCN. The website contains teaching materials (video, print, grower videos, etc.), sampling information, management strategies and much more.

Your county Extension agent is also an excellent resource for information. 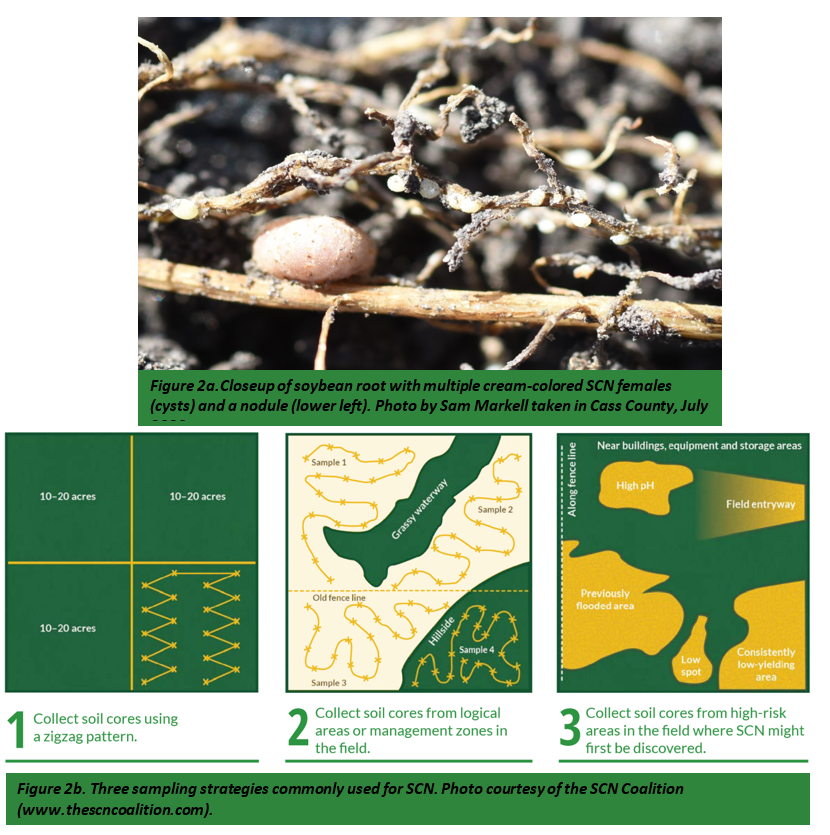