Kwame Anthony Appiah will present Understanding "Racisms" and Racialism followed by a moderated conversation for the Learning the Language of Diversity and Meaningful Inclusion Speaker Series. The Northern Plains Ethics Institute at NDSU and the YWCA Cass Clay announced that event is to all NDSU stakeholders and the public. However, registration is required. The lecture is provided free thanks to the sponsorship of the Northern Plains Ethics Institute, the YWCA Cass Clay, Humanities ND, and the NDSU College of Arts, Humanities, and Social Sciences.

Exciting and erudite, Kwame Anthony Appiah challenges us to look beyond the boundaries—real and imagined—that divide us, and to celebrate our common humanity. Named one of Foreign Policy’s Top 100 public intellectuals, one of the Carnegie Corporation’s “Great Immigrants,” and awarded a National Humanities Medal by The White House, Appiah currently teaches at NYU, though he’s previously taught at Princeton, Harvard, Yale, Cornell, Duke, and the University of Ghana. He considers readers’ ethical quandries in a weekly column as “The Ethicist” for The New York Times Magazine. From 2009 to 2012 he served as President of the PEN American Center, the world’s oldest human rights organization. He is currently chair of The Man Booker Prize.

Anthony Appiah’s book Cosmopolitanism is a manifesto for a world where identity has become a weapon and where difference has become a cause of pain and suffering. Cosmopolitanism won the Arthur Ross Book Award, the most significant prize given to a book on international affairs. In The Honor Code: How Moral Revolutions Happen, Appiah lays out how honor propelled moral revolutions in the past—and could do so in the future. Walter Isaacson calls it “an indispensible book for both moral philosophers and honorable citizens.” Among his most recent books are As If: Idealization and Ideals, an exploration of the way ideals facilitate human progress; Mistaken Identities, further explores subjects of his popular BBC series; and the brand new The Lies That Bind, an incandescent exploration of the nature and history of the identities that define us.

Kwame Anthony Appiah was born in London to a Ghanaian father and a white mother. He was raised in Ghana, and educated in England, at Cambridge University, where he received a Ph.D. in philosophy. As a scholar of African and African-American studies, he established himself as an intellectual with a broad reach. His book In My Father's House and his collaborations with Henry Louis Gates, Jr.—including The Dictionary of Global Culture and Africana—are major works of African struggles for self-determination. In 2009, he was featured in Astra Taylor’s documentary Examined Life, alongside Martha Nussbaum, Slavoj Zizek, and other leading contemporary philosophers. 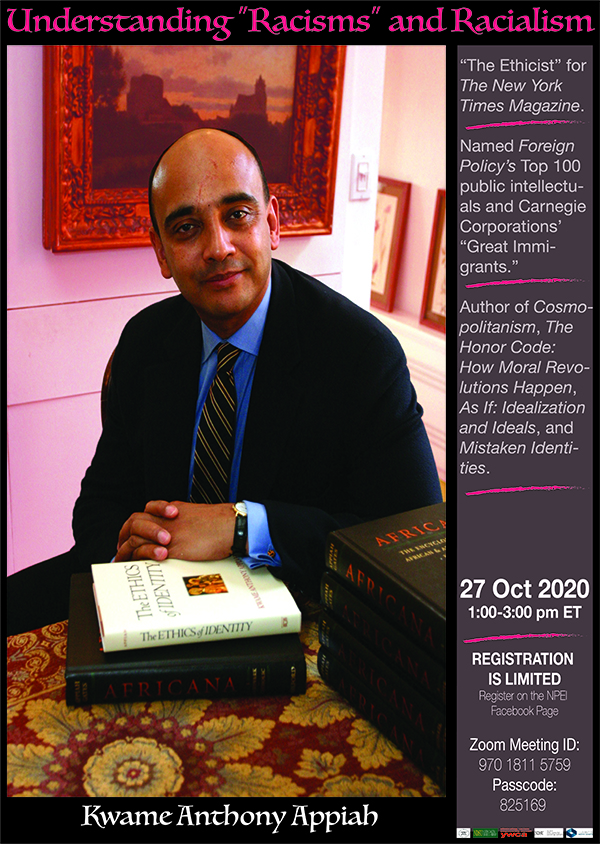