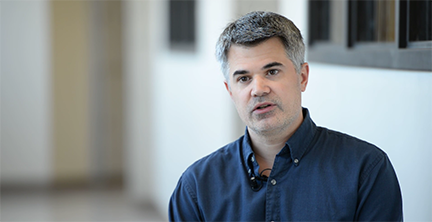 After working as a communications editor for 14 years, Doug was looking for a career change. At the time, he also had met someone enrolled in nursing school, who later became his wife.

“I came across medical laboratory science programs and thought that would be perfect. Then I began looking at programs around the area and chose NDSU,” said Doug.

“I set up a meeting with an adviser for the program and she was so prepared and was able to answer all of my questions and just made it seem—she was so friendly and inviting that it just seemed like a perfect fit,” he said.

NDSU’s program stood out to him because the last year of the program includes an internship in a hospital. “I thought that would be ideal,” said Doug, his face becoming animated. “I mean, working in the setting, what better education can you get than on-the-job training?”

“My top choice was Fargo just because I’m married and have a family. I didn’t want to go too far, but for the program or the degree, I would have been willing to go elsewhere,” he said.

Doug admits he had some trepidations as a non-traditional student coming back to change careers. “Other than the popular science books I read, it had been a while since I had any science courses.”

He knew he was willing to work hard to pursue his new career and is now interning at a Fargo hospital.

“The most challenging aspect has been to balance work and my studies,” Doug said. With a family, he continued to work full time prior to his internship, but didn’t lose sight of his goal.

“With the medical laboratory science program, once you finish and enter the job force, there are multiple areas in the lab you can work in,” he explained.

Doug hopes to focus on microbiology or a molecular diagnostics area where DNA and proteins are used to identify microbes. He appreciates the role that medical laboratory science professionals play in assisting health care teams who treat patients.

“I’ll be identifying the microbes that are causing infection or maybe chemical imbalances that are creating disease or using those to identify organ problems,” he said.

After graduation, he hopes to stay in Fargo to work. Doug also has advice for others pursuing a career change. He suggests looking at curriculum, and meeting with advisors, professors and some students.

“Make sure this is what you want to do because you’re going to have to invest a good amount of time. Prepare as much as you can to know what you’re getting into and just do it.” The journey has dividends. "This is the career I want," said Doug. "Absolutely, it's worth it."