Meet Tanner Anderson, who is a senior from Bismarck North Dakota.  Tanner is majoring in Biology and Anthropology and is working in the Dr. Julia Bowsher lab. In the Bowsher lab, Tanner is researching the transcriptomic regulation of temperature stress in solitary bees.  His work will help us understand why bees exposed to brief warming periods are able to survive long-term cold stress. During his time in the Bowsher lab, in collaboration with the USDA, Tanner has gained valuable skills in bioinformatics. Tanner has also gained research experience in Anthropology working with Dr. Kristin Fellows at the Fargo brothel site. He is an active member of the Wildlife Society.  Following graduation, Tanner will utilize the skills he has gained in both Biological Sciences and Anthropology as a PhD student at the University of Oregon where he will utilize his bioinformatics skills to study human evolution and differential gene expression in the brain. 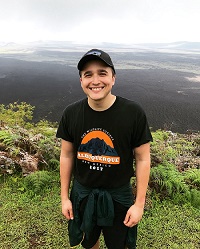 Hanna is from Moorhead, MN and has participated for nearly two years in the Gillam Bat Behavioral Ecology lab.

Hanna joined the Gillam lab in early 2016 and quickly became an indispensable member of the team. She has assisted on various projects, including studies aimed at assessing 'personality' in bats, as well as investigations gathering morphometric and genetic data aimed at better identifying local Myotis bat species. She has gained skills in radio-tracking endangered bats, capture and handling of bats as well as animal husbandry skills.

Hanna will graduate this December and will join the Gillam lab as a graduate student in 2018, where she hopes to investigate the relationship between morphological variations that influence hearing and foraging strategy of Myotis bats. 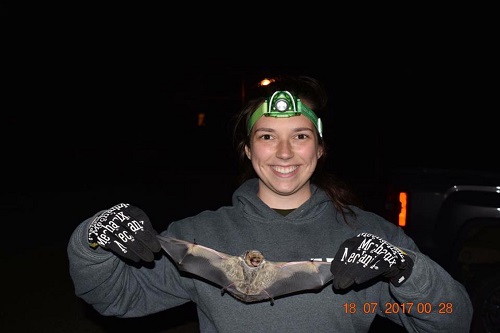 Stephen grew up right here in Fargo and went to Davies High School. He has been working for the Hamilton Lab since May of 2016 on several projects.

Stephen's own project is studying the genetics of a plant called Prairie Smoke and looking at evolution in adaption to local environments. However, he has spent plenty of time indulging in his curiosity for different fields of work by assisting other lab members in their own pursuits. For example, he worked with Lionel Di Santo in California on the Ex Situ conservation of the Torrey Pine, and he manages greenhouse plant specimens.

In his free time, Stephen likes to garden, go for walks, and play the bassoon. After graduating, Stephen would like to be a lab or field technician at a university, government agency, or agricultural company. 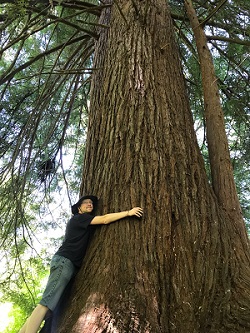 Micki grew up in Rochester, MN and attended Century High School. Her family now lives in Alexandria, MN. Micki has many interest and goals that she is pursuing by doing research in Dr. Bowsher’s lab.

Micki’s current research is concerned with the possible relationships between phytochemicals and the immune function of honey bees. She also assisted with Garett Slater’s work (determination of casts) in the lab. She will be doing work on this again as part of her summer research internship with the USDA. Additional recognition of Micki’s research is that this year she received the Cassel Grant Undergraduate Research Award. This funding is important to her as she carries out her own research project.

Micki is very active outside the lab. For example, she has been active in the Wildlife Society club since she came to NDSU and is now President of it. She is a student ambassador for the College of Science and Mathematics, and hope to be a Learning Assistant for our Evolution course next semester.

As for her “outside” interest and future plans, Micki likes hockey, playing with bugs, and indulging on burritos. After graduation, she will be off to graduate school and plans to continue research about insects---preferably bees! 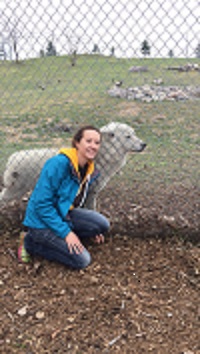 Tania Kibble is a senior majoring in Zoology. She is native to the Midwest, growing up in Montevideo, MN. She is a childhood cancer survivor that is passionate about devoting her life to medicine and improving the lives of others. She is currently interviewing at several medical programs and plans to begin medical school next year.

Tania has worked in the Heidinger lab for over two years on several projects related to early life experiences and aging. Currently, she is conducting research examining the relationship between telomeres during development and longevity. Telomeres are repetitive sequences of non-coding DNA that enhance genome stability, but shorten during cell division and in response to stress and limit cellular lifespan. Tania is testing whether it is possible to extend telomere length in house sparrow chicks to experimentally examine the effects on longevity.

Tania has also served her community in many ways volunteering as a patient care specialist at Plains Ear Nose and Throat Clinic, and at Sanford Hospital on the post operative floor and the neonatal intensive care unit, all while maintaining an excellent academic record.

In summary, Tania is a very bright, mature, resilient, focused, and caring undergraduate that has contributed greatly to the department and the Fargo community. 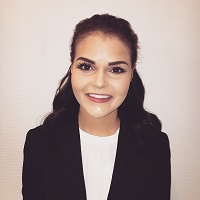 Allison is a sophomore from Maple Grove, MN, majoring in Zoology.  Ally has excelled in her course work, and has become even more intimately involved in the activities of a University; she is participating in generation of knowledge, working in the lab of Dr. Stuart Haring in Biochemistry, and helping to spread knowledge through instruction, working with Dr. Angie Hodgson as a Learning Assistant in the introductory biology sequence.

Ally started working in the Haring lab in January 2016, working on a project that aims to identify, through establishment of a yeast-two-hybrid assay, if and how proteins of interest interact with SNAIL, a protein important for regulating cancer metastasis. As part of this project, Ally has learned important lab skills including amplification of genes via PCR, cloning of genes into plasmids, introduction of this DNA into bacteria and yeast cells, followed by diagnostic testing of the interactions of the proteins coded by this DNA with the SNAIL protein.  Ally has presented her progress and the findings of her research at regular lab meetings, as well as a presentation at the 2016 meeting of the North Dakota Academy of Science.

This semester, Ally began working as a Learning Assistant for BIOL 150.  In this position, Ally helps students improve their understanding of biology by assisting them with in-class problems, by holding a weekly study session during which students can get extra help on challenging topics, and by helping to provide feedback to students on homework and test questions.  In this position, Ally has demonstrated her excellent understanding of the foundational concepts in Biology. 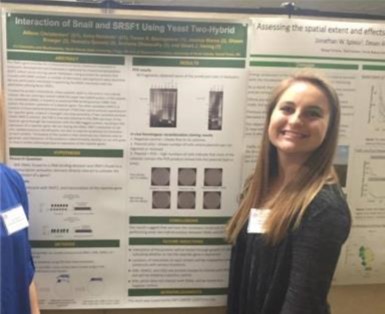 Alexis is originally from Andover, MN and is currently finishing her freshman year at NDSU.  Alexis has been working with Dr. Jill Hamilton on a project studying a perennial wildflower, Prairie Smoke.  Alexis has been looking at this species in the NDSU herbaria collections, online herbaria, and collections from outside sources already on hand. Alexis has been pairing her findings with climate data so that she can identify relationships between different variables and understand how Prairie Smoke is adapting to a changing climate. By doing this, Alexis hopes to  figure out how to effectively conserve this species and possibly use it to restore prairies.  Alexis has also helped Dr. Hamilton with research on Torrey Pines in California.  This involved a field trip to California over Spring Break to collect samples for genetic analysis.  Alexis will be doing more fieldwork this summer with the Greives Lab, working on Juncos in the Black Hills of South Dakota.  All of these research experiences have furthered Alexis’ interest in pursuing graduate school.  She thinks she may want to have a research career and be a professor someday, but as of right now, her goal is to keep learning and discovering new things with passion. 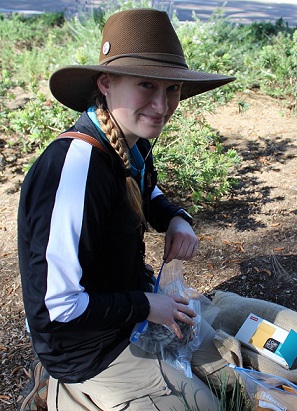