The Overnight Lending Intervention That Wasn't 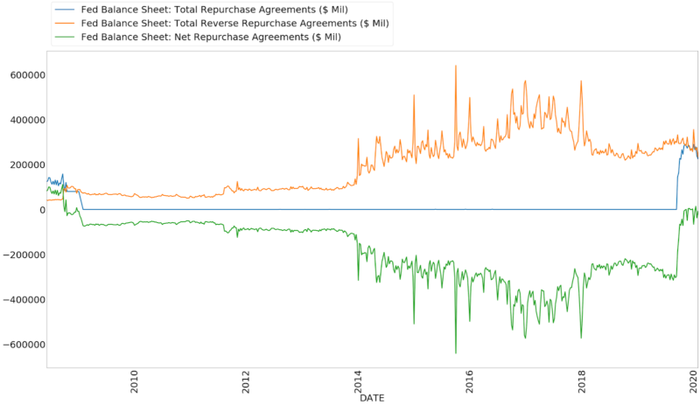 Since September, the Federal Reserve has consistently increased its holdings of U.S. Treasuries. This is responsible for the steady increase in the size of the balance sheet even after Fed holdings of repurchase agreements stabilized.

Powell’s approach was twofold: relieve the pressure placed on the overnight market by the Federal Reserve and provide support for federal borrowing.

While Powell has simultaneously solved these interdependent problems, the move has revealed difficulties faced by the current regime. A reduction of the Fed’s balance sheet necessarily reduces support for federal borrowing. Without support, rates paid on U.S. Treasuries will rise, as will rates in other markets. This is particularly true for short-term borrowing, as we observed in September. The new intervention, however, moves the size of the balance sheet back above $4 trillion. 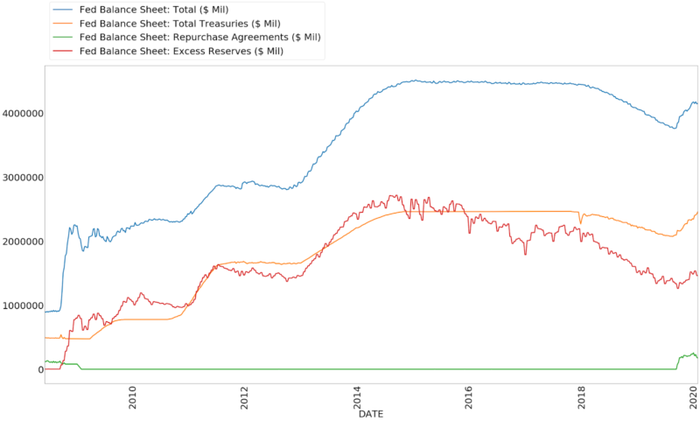 There may be a silver lining in the recent changes. The Federal Reserve has somewhat decreased its level of repurchase and reverse repurchase agreements since November. This reduction has been relatively small compared to the recent expansion. Still, it would not be unreasonable for the Federal Reserve to continue reducing the value of holdings in sync with one another. This would be one means by which it can reduce the size of its balance sheet without exerting a net effect on the market.

At present, holdings of repurchase and reverse repurchase agreements have hovered from around $260 billion to $280 billion. Since these values are about equal, the Fed is essentially intermediating these funds, borrowing from and lending to investors in the overnight market. Thus, simultaneous reduction of these balances would not harm these markets.

Throughout his tenure, Powell has shown a willingness to reduce the weight that the Federal Reserve places on financial markets. He was the first chair since the 2008 crisis to reduce the rate of interest paid on excess reserves relative to the federal funds rate. He has increased this discrepancy twice now. He also consistently reduced the size of the balance sheet until September 2019.

Although Powell is the chair, he faces pressure from both inside the Federal Reserve board and Congress. To implement change, he must either withstand this pressure or accomplish his goals by a means that does not generate resistance from them. The current strategy seems to take the latter approach. Time will tell if he can reduce the Fed’s footprint moving forward.

This article first appeared at AIER.