In 2010, not too long after the financial crisis, Chairman Ben Bernanke gave a talk titled “Central Bank Independence, Transparency, and Accountability.” “A broad consensus,” he argued, “has emerged among policymakers, academics, and other informed observers that … conduct of monetary policy in pursuit of these goals [i.e., long-run macroeconomic stability] should be free from political control.”

In his formulation, Bernanke argued that political pressures might generate “higher inflation and inflation expectations in the longer run, with no offsetting benefits in terms of greater output or employment.”

Perhaps ironically, Bernanke noted that there may exist pressure from the government “to abuse the central bank’s money-printing powers to help finance its budget deficit.” But don’t worry, he notes only a few pages later, “there is a good case for granting the central bank independence in making quantitative easing decisions” even if monetary expansion “can have fiscal side effects.”

As Allan Meltzer observed in 2014, the Bernanke Fed “defended its policy as an effort to lower the unemployment rate.” It also supported a doubling of government indebtedness in a span of only seven years. The evil of inflation, which Bernanke condemns as a sign of a lack of independence, was simply hidden by the provision of “trillions of idle reserves” made ineffective by payment of a risk-free rate of interest by the Federal Reserve.

Bernanke’s statement is reminiscent of a person supporting the addiction of a loved one while simultaneously hiding it from the public. If you know the background of monetary and fiscal policy in the United States, the speech reads as though written by a party suffering through a codependent relationship.

The reality cannot be hidden, even if its effects can be indefinitely delayed. From the start of the crisis to the greatest extent of the quantitative easing (QE) programs, the Federal Reserve increased the size of its balance sheet by a multiple of five. The initial intervention was supposed to (1) quell a volatile mortgage market and (2) enable fiscal expansion with the intention of supporting macroeconomic stability. As the mortgage crisis has receded, its long-term impact has been to support federal borrowing of a size greater than 100 percent of GDP and to permanently transform monetary policy, making it indecipherable to the public. 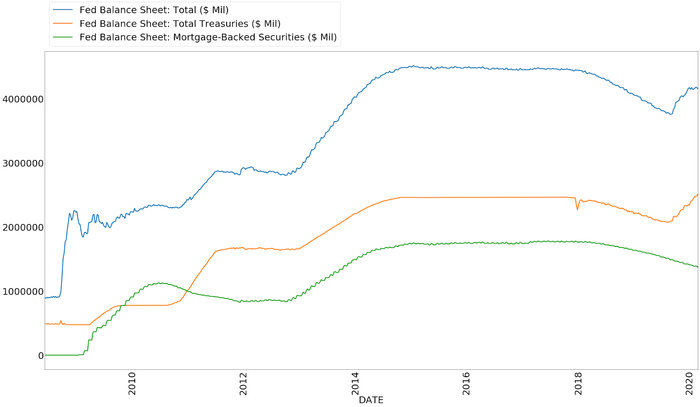 The true aim of monetary policy has been revealed by the recent pivot of the Powell regime. In September, short-term lending markets hiccupped as the federal government issued new debt to offset a wave of maturation. The new issues attracted funds from overnight lending that were not swiftly offset, leading interest rates in the market to jump into the double digits. Powell’s twofold solution has been to significantly increase support of federal borrowing and simultaneously to support the overnight lending market. Part of support for both has occurred in the form of repurchase agreements where the Federal Reserve temporarily buys Treasuries from investors in the overnight lending market. The now-decade-old program of QE has returned, though Powell has refused to adopt this moniker as a descriptor of his policy.

It would be difficult to frame Powell’s recent reversal as an irrational move. Even those who wish to see greater fiscal responsibility by the federal government must recognize that a swift reduction of Fed support for the Treasury could set off an international financial crisis.

Tools of the current regime include money creation used to support federal borrowing, shuffling of money to and from the Treasury’s General Account at the Federal Reserve, payment of interest on excess reserves, and soon the creation of a short-term lending facility. All of these are part of the Federal Reserve’s attempt to support federal borrowing while limiting any destabilizing effects entailed in the response of investors to a ballooning fiscal policy.

Most important for the Federal Reserve is to prevent significant increases in the rates paid on federal debt. Rates will rise (1) if the rate of inflation increases as new money enters the financial system, (2) if liquidity constraints cause rates across the market to rise, or (3) if foreign investors lose faith in the ability of the federal government to repay its debts.

Payment of interest on excess reserves and manipulation of balances in the Treasury’s General Account attempt to avoid inflation that would lead to a rise in nominal rates (1). The recent intervention in overnight lending markets confronted the effect of liquidity constraints (2) while simultaneously increasing the Federal Reserve’s support for federal borrowing.A loss of faith from foreign investors (3), however, will not be so easily quelled by the Federal Reserve.

If foreign investors expect that the U.S. government will not be able to repay the real value of its debts, they will demand higher nominal rates of return to offset the effects of inflation. This anticipation will simultaneously lead to a fall in demand for dollars and, thus, a fall in the value of the dollar. As a result, interest payments on federal debt would significantly increase, both making future borrowing more costly and increasing the burden of interest payments.

At a size of $23 trillion, a 1 percentage point increase in the average rate paid on federal debt amounts to $230 billion more per year — and that does not include any compounding of interest. Policy makers will be left with the choice of either voluntarily decreasing the level of spending or continuing to depend upon the Federal Reserve to support their fiscal endeavors. The latter option, however, would be associated with continued devaluation of the dollar.

Jerome Powell must confront the challenge of limiting support for federal borrowing. Fiscal profligacy threatens an international crisis if not reined in by the Federal Reserve. As we have observed with his past interactions with Trump, Powell’s tenure may be threatened if he fails to support the aims of the executive branch.

Likewise, Congress may attempt to exercise its influence over the Federal Reserve as fiscal constraints become binding. Successfully navigating this storm of political interests will require Powell to be wise, of strong will, and cunning in order to support the formulation and implementation of sound policy. Long-term support of the status quo is not sustainable.

This article first appeared at AIER.