Enterprise on the Prairie: COR Robotics

This article is part of a series, Enterprise on the Prairie, which showcases the efforts of enterprising residents who are creating value in their communities.

Ryan, a senior at North Dakota State University, started COR Robotics after attending a job fair without any interest from employers.

Then he thought, “Hey, let’s do something better.”

As an entrepreneur, Ryan learned to navigate and develop institutions. He founded a robotics club while attending Becker High School near St. Cloud, Minnesota. In their first year, the team won the state championship. He has since used his experience at NDSU to support his interests and spread his passion. 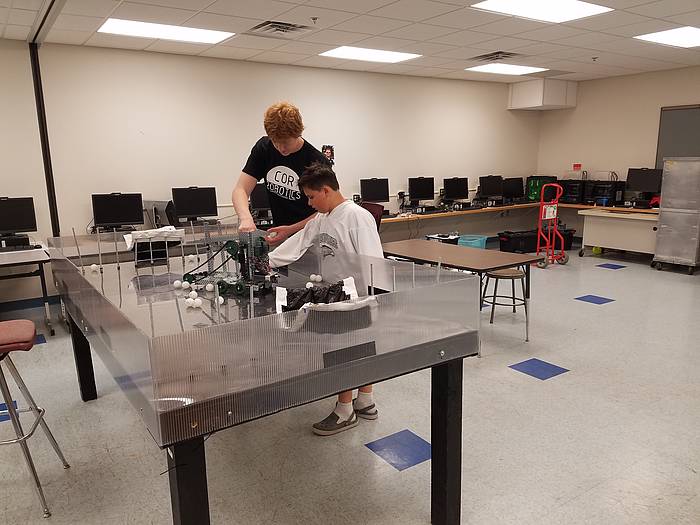 COR Robotics is not your standard company. Ryan acts as a mentor to students while helping to establish robotics teams at schools that are currently without. Teams strive to produce a robot, and along the way, they develop both technical and interpersonal skills. Ryan explains that a robotics team operates like “a preprofessional program”.

"The product is the robot and everything that goes into it. You obviously need to fundraise. Robots are expensive. So they have a full, 40-page business plan for how to fundraise, where that money goes – like funneling it into outreach, into the build, etc. So we have a marketing team. It’s got a finance team. You’ve got a CFO on the team, student CFO, and it’s so much more than just a robot. Any skill you can imagine a student having or needing, you can incorporate into a team."

If the value entailed in creating and participating in a robotics team is so immense, why don’t more robotics teams exist?

“It is a universal issue trying to get the administrations on board,” Ryan relayed in our discussion. He said acquiring recognition and support from school administrations is often the biggest challenge.

He reflected that persistence is the best way to build support for a robotics club:

"I think the best way to approach a school board is with persistence. One of the schools that I was working with had the idea to go out into the lobby of the school board meeting and drive the robots around.  Just, pull a little demo together so that they are forced to look at the cool things they are doing. Things like that really work. And there’s another thing. Some teams have trouble recruiting students. One recommendation from somebody who is . . . a leader in the FIRST [For Inspiration and Recognition of Science and Technology] robotics community in Minnesota: he actually recommended to go into the lunch room and to just drive the robots around, crash into tables and stuff, just to make a commotion and say ‘hey this stuff is really cool. Anybody can do it.’ And that actually worked. That team got 20 new members for the next year."

A key element to establishing these clubs is community support:

"In contrast to the administration, the donors and the community itself is so supportive and I find that to be almost universally true. All of the teams I work with, if they put in the effort of going to a sponsor or going to a community member and they give a pitch about what they are doing, it’s like 100% success rate."

Only by developing this local support for youth robotics team can Ryan develop the demand necessary for the summer camps put on by COR Robotics.

Ryan is currently trying to expand the number of summer camps offered each year. He plans to hold 50 camps this summer. Ryan said he is on track to meet his goal and hopes to have even greater expansion next year when he plans to hire managers to oversee staff and operate many of the summer camps.

"I’ve had a lot of people in the Fargo area approach me.  . . There are cool possibilities in Fargo that are probably going to happen within a few years. . . We need to do something to grow FIRST in North Dakota and then I can enter with the camps."