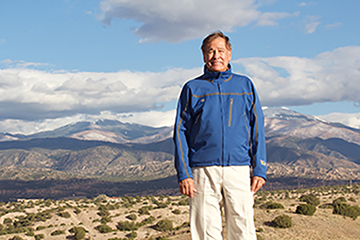 Fargo, N.D., March 28, 2016 – Olympic athlete Billy Mills will bring his message of “The Pursuit of Excellence” to North Dakota State University on Friday, April 1 at 7:00 p.m. in Sudro Hall, 1401 Albrecht Blvd., Room 27. The appearance by Mills, hosted by the Department of Public Health in the College of Health Professions at NDSU, is free and open to the public.

Mills won the gold medal in track and field in the 10,000 meter race at the 1964 Olympics in Tokyo, Japan. His inspiring come-from-behind victory is considered one of the greatest Olympic upsets of all time. Mills, a former lieutenant in the United States Marine Corps, is a member of the Oglala Lakota.

A co-founder of the non-profit group Running Strong for American Indian Youth, Mills’s message of pursuing excellence and of battling diabetes provides inspiring lessons for life and for public health. His work includes speaking about diabetes prevention and management, especially for youth. As a diabetic himself, Mills offers information, as well as inspiration, on maintaining a healthy lifestyle.

Born in Pine Ridge, South Dakota, Mills attended the University of Kansas on an athletic scholarship. He was an NCAA All-America Cross Country runner three times and won an individual title in the Big Eight in cross country. He was inducted into the U.S. National Track and Field Hall of Fame, the U.S. Olympic Hall of Fame, and the National Distance Running Hall of Fame. He was the subject of the movie Running Brave and is the author of Lessons of a Lakota and co-author of Wokini: A Lakota Journey to Happiness and Understanding.

Mills was awarded the 2012 Presidential Citizens Medal for his work with the Running Strong for American Indian Youth organization. In 2014, Mills received the Theodore Roosevelt Award from the NCAA. For the 50th anniversary of his Olympic gold medal in 2014, Mills celebrated by founding Dreamstarter, which provides grants to jumpstart the dreams of Native American youth.