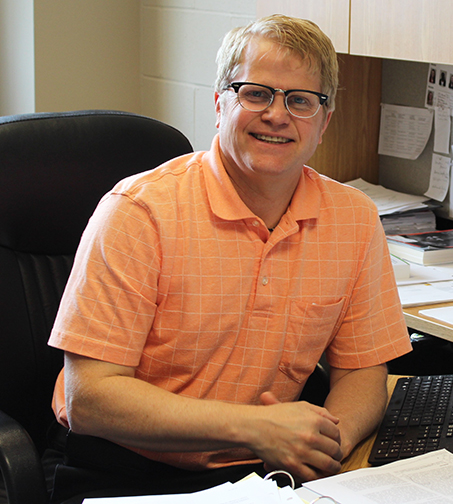 Mark Strand, professor in the College of Health Professions, has been selected to receive NDSU’s Mentoring Excellence Award, which was established with the NDSU Foundation by an anonymous donor.

Strand’s appointment is split between the Department of Pharmacy Practice and Department of Public Health. He advises students and mentors student research in both departments.

“Mentoring is essential for building an academic culture of growth and development. The Faculty Awards and Recognition Committee selected Professor Strand for this year’s award for his strong commitment to, and effectiveness in, mentoring his students as well as his faculty colleagues,” said vice provost Canan Bilen-Green.

Associate professor Heidi Eukel was among Strand’s nominators. She praised his mentorship as they collaborated on a statewide pharmacy practice project, and his role as a facilitator bridging the Department of Pharmacy Practice and the Department of Public Health.

“Dr. Strand is motivating, directional, an active listener and a reflective guiding voice,” Eukel said. “His office is often open to faculty looking for advice on professional development, data analysis, project implementation and research planning. Likewise, students within pharmacy and public health receive personal and professional support and guidance in both formal and informal manners.”

Oliver Frenzel, a 2020 Master of Public Health candidate, said he assisted Strand in research that focuses on opioid and naloxone education. “His research experience and his willingness to share his knowledge on investigational processes have allowed me to participate during all phases of this project,” Frenzel said. “Not only has Dr. Strand served as a research mentor, but he also delivers superior mentorship during the public health courses that he instructs.”

Don Miller, professor of pharmacy practice, provided a letter of support. “What is remarkable about Mark is his impact on both departments at every level – undergraduate students, graduate students and faculty. He is well known by everyone as highly collegial, and an outstanding mentor to others,” Miller said. “I could hardly imagine a faculty member more committed and more successful at role modeling and mentoring in every way and at every level than Mark Strand.”

Strand’s vita lists 65 peer-reviewed publications. His other honors include the Mid-Career Achievement Award in International Health from the International Health Section of the American Public Health Association, 2016 Dean’s Award for Excellence in Research from the NDSU College of Health Professions, induction into NDSU’s Tapestry of Diverse Talents; and the 2014 Outstanding Rural Education/Mentor Award from the North Dakota Public Health Association.